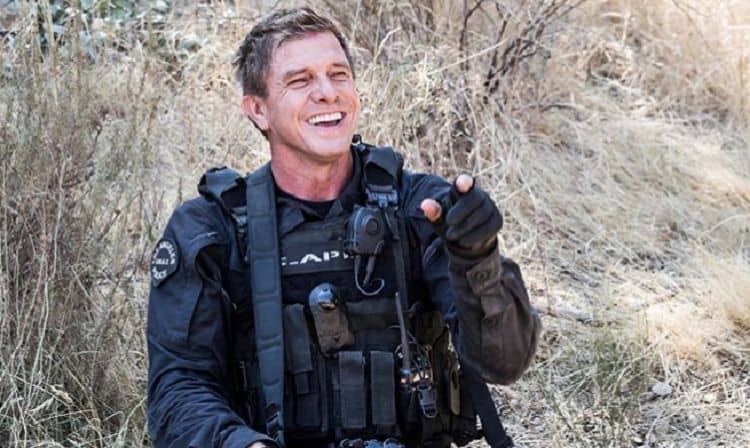 Kenny Johnson’s career has spanned the course of four decades. During that time he has gone from an inexperienced rookie to a seasoned vet who can command attention from any kind of audience. Kenny’s track record for playing a wide range of characters has allowed him to have a host of different opportunities. From TV to film, Kenny has always risen to the occasion regardless of of the size of the role. He is most well-known for his roles in shows like Saving Grace, The Shield, and his current told as Dominique Luca in S.W.A.T. On top of his TV work, he also has two upcoming film projects. Continue reading for 10 things you didn’t know about Kenny Johnson.

1. He Was A Professional Model

Kenny’s windblown blue hair and handsome smile have been helping his career since before he even got into acting. For several years, he was a professional model who worked with well-known modeling agencies such as Ford and Wilhelmina. He eventually decide to focus entirely on acting.

2. He Got His Start With Commercials

Breaking into entertainment isn’t an easy thing to do, so when good opportunities come along you have to take advantage of them. Kenny was able to do that by doing several commercials early on in his career. These opportunities may not have been the fanciest, but they helped him get his foot in the door.

Connecticut is one of those states that’s easy to forget about if you’re not from there or don’t know anyone who is, but it’s not a place that Kenny will ever forget. He was born in Connecticut but was raised primarily in a farm in Vermont. He returned to Connecticut to attend college.

Kenny struggled in school for much of his career as a student, and this was due to the fact that he suffers from dyslexia. The disorder almost halted his acting career in the early days because he was unable to to read scripts. Eventually he found a method that worked for him, but it still takes him much longer than other people to read and retain information. Still, he refuses to let that stop him.

5. He Was A College Athlete

After a successful high school baseball career, Kenny earned an athletic scholarship for college. Kenny attended Central Connecticut State University in New Britain, CT where he was a member of the baseball team. Unfortunately, he suffered a serious injury to his back during his playing career.

6. He Was A Competitive Arm Wrestler

Baseball isn’t the only thing that brought out Kenny’s competitive side. He is also an arm wrestling world champion who participated at the amateur level for several years. Although he no longer arm wrestles competitive, he still likes to have matches for fun.

7. He’s Serious About The Research For His Roles

Due to his dyslexia, Kenny typically spends dozens of hours going over a script for the first time. Once he is cast for an opportunity, he then spends even more time doing research to make sure he can learn as much about the role as possible. He keeps track of the information he learns by taking very detailed notes.

Balancing a demanding career and life at home comes with its challenges, but Kenny isn’t complaining. Not only does he love what he does for work, but he loves coming home to his family. He has been happily married actress Cathleen Oveson for more than a decade. The couple has one child together.

9. He Loves The Beach

Kenny may have been born and raised on the east coast, but he has lived in the Los Angeles area for several years now. On top of being the perfect place for an actor, Los Angeles is also known for its warm weather and beautiful beaches. Kenny takes advantage of both of those things as often as he can. He loves being by the water and enjoying the views.

10. He Believes That Some Roles Are Meant For Certain People

Kenny is a believer in the idea that what’s meant for you will find you and he also believes it’s important to be ready when it comes. He told Daily Actor, “I believe there are projects and characters that are supposed to be yours. As long as you have a belief in that and you don’t buy into, “Oh this is so hard. There’s so many people. What makes you think you can be an actor?” It’s about not caring about who rejects you or whatever. It’s like you do what you want to do and don’t let anyone tell you any different. That’s what I believe.”