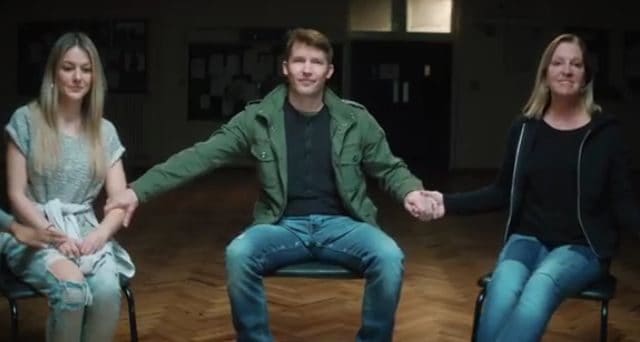 I’ve never been the biggest James Blunt fan with regards to his music.  However, over the years I’ve certainly taken to his comedic chops.  The guy is never short on making fun of himself or anyone when he’s got the chance and for that I very much respect the guy.  In Blunt’s latest promotion for his new album he was nothing short of humorous when putting together a little clip for his fans.

In the video you’re about to see, James Blunt utilizes the secretive (and sometimes embarrassing) nature of being a Blunt music fan to his advantage in a hilarious ad for his new album, The Afterlove. People sit in quiet circle in what appears to be a support group. As one woman struggles to speak, Blunt reveals himself next to her and says, “It’s OK, Claire. We’re all James Blunt fans here.”

Blunt totally gets it.  He, like a Michael Bolton, is the kind of musician that we’re sort of embarrassed to be a fan of.  So instead of advertising your love for his music, you tend to keep it to yourself.   But despite all of that, Blunt is here to remind us that his music will always be there for us.  Isn’t that nice?

Check out the ad below: