Home
Video Games
Is Star Wars the Old Republic Worth Playing in 2021? 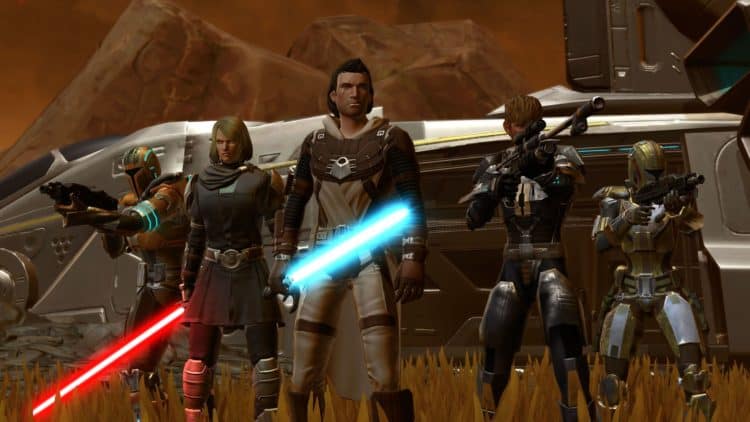 MMOs (Massively Multiplayer Online games) are a dime a dozen these days, and competition between them is as fierce as could be expected, given the massive time investment that playing one requires. There are only so many hours in the day, and even the most willing of players could not hope to complete all the games that are on offer. Which is true of most forms of entertainment, in this media-saturated age. So it is only to be expected that people have grown increasingly picky about what they choose to invest their time and money in.

One of the most high-profile MMOs on the market is Star Wars: the Old Republic. Published by famed developers BioWare and boasting one of the most popular licenses in the world, it was released to great hype towards the end of 2011 but quickly ran into problems, as MMOs are wont to do. Though initially available to subscribers only, within a year the falling subscription numbers prompted BioWare’s parent company EA to urge that the game add a Free-to-Play option and an in-game store in which players could pay extra for cosmetic items. That, too, is increasingly standard among MMOs. World of Warcraft and Final Fantasy 14 are among the few who have been able to avoid switching to that business model.

Quite why a game made by such respected developers and set in such a popular universe did not end up being counted among the above is a matter of some conjecture. BioWare crafted eight separate stories for the different playable classes, from Jedi Knights to Sith Warriors, Smugglers and Bounty Hunters. All of these were fully voice acted, by either a male or female actor depending on the player’s choice, and featured a unique crew of recruitable–and sometimes romanceable–companions. One of the initial errors was that BioWare expected players to focus on levelling up all of these different classes and seeing the stories from their point of view. They did not anticipate people rushing to the maximum level on a single class in order to experience what MMO veterans call the “end game”. SWTOR, as it happened, did not come released with much of an end game. That was something they expected to add later. This lack of understanding between the developers and many, though not all, of their playerbase was a big part of what led SWTOR to fail to live up to its high expectations.

The hasty efforts to change course resulted in somewhat of a crisis of identity, one which has characterized the game ever since. The developers wanted SWTOR to be a subscription game, but were forced to add a Free-to-Play option to stabilize the playerbase. But they still wanted those player’s money, of course, so a great many restrictions were implemented to try to inspire people who sampled the game for free to subscribe. The main story content for all classes was made available in entirety, but irritations such as not being able to move above jogging pace for a good third of the initial levels was included. The option to sprint was reserved for subscribers. Needless to say, this did nothing to endear the game to those who sampled it. One wonders if making the initial chapters of the game available for free, without such irritating restrictions, while keeping later chapters for subscribers only might have been a better option. Final Fantasy 14 has had some success with attracting new players, who often become subscribers, using a similar system.

But this crisis of identity has hindered the game in other ways, too. The eight separate class stories not having grabbed players the way they had initially hoped led to a sudden change in storytelling in later expansions. Gone were the separate class missions and companions. In their place was a linear story, or rather a pair of linear stories, one for the Empire and one for the Republic. This proved jarring for those fans who had enjoyed the class stories as originally intended, and who now found themselves with a variety of characters, all still fully voice acted, but now playing and replaying the same story.

It should be noted that the voice actors in SWTOR are all top talents, with Jennifer “Commander Shephard” Hale, David “Solid Snake” Hayter, and Grey “Azula” DeLisle being just a few of the bigger names among the stellar cast. Those guys don’t come cheap, one must assume. And the fact that they are all being paid to voice what has become essentially the same character is one of the many head-scratching things about SWTOR’s colorful evolution. While some players left over the lack of endgame initially, feeling it left them with no reason to keep playing their character, others left over the lack of class stories in expansions, feeling it left them with no reason to keep replaying their characters. All of which has led to SWTOR feeling very much like a game with an identity crisis.

The end game did get added, though it has come to involve a great deal of replaying and grinding the same content, with old Operations (raids, as they are often called in other MMOs) being given increased stats each time the level cap is raised, asking players to keep redoing them rather than moving on to new ones. The same is true of the game’s Flashpoints (called dungeons elsewhere). This flirts with satisfying, without quite doing so. Similarly, the game makes token efforts at keeping the unique classes, with the occasional reference to old class stories, or some companions only being willing to follow their initial class character rather than the new one-size-fits-all version. Again, this flirts with satisfying those who liked that aspect but does not quite go all the way. All told, SWTOR is a game that does not seem to know what it wants to be. It wants to be a subscription game but won’t commit to that. It wants to have end game content but won’t make new content to truly challenge the players. It wants to continue having class stories but won’t follow through.

So, should you want to play it in 2021? It would say it is worth a look, despite its flaws. A one month subscription doesn’t cost that much, and should allow you to bypass the most annoying restrictions from the Free-to-Play model. And there is a wealth of content available, what with all that has been added in the decade since that initial release. A new player would find themselves with tons to do, even if they only picked one character to play as rather than playing all eight as originally intended. In fact, doing so would be advisable now, since it would prevent you from feeling disappointed by the linear direction the game went. Check it out, going in with the right mindset, and you will find a cinematic experience that most other MMOs do not come close to offering.