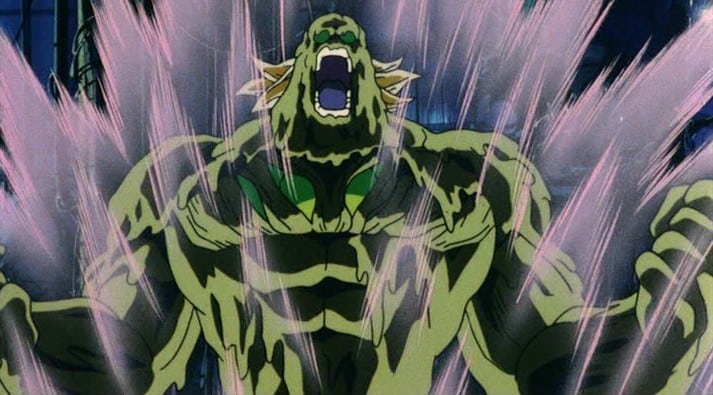 Okay, so Dragon Ball Z: Bio-Broly starts off with a couple of humanoid beings coming out of their tanks after being created by a scientist named Dr. Collie, who created these beings after being instructed by his boss, Mr. Jaguar, to do so. Jaguar plans to take these creatures to expose his childhood adversary, Mr. Satan, as the world’s greatest fraud. We then see another being in a tank, except this one has a tail… Meanwhile, Android 18 is busy trying to collect her money from Mr. Satan after she let him win in a martial arts tournament, as Krillin, Trunks, Goten, and Marron wait outside. A businessman-looking individual named “Men-Men” arrives after taking an accidental dive in the pool outside. Men-Men threatens Mr. Satan with exposing to the entire world that Mr. Satan is a bed wetter, and forces him to come battle Mr. Jaguar’s bio-warriors. Android 18 reluctantly comes along as she knows that Mr. Satan will try to skip out on their deal the first chance he gets, so Mr. Satan, Android 18, Goten, and Trunks all head over to Mr. Jaguar’s island. Jaguar organizes a tournament to pit his bio-warriors against Mr. Satan, but Android 18 steps in and orders them to come all at once, when Goten and Trunks also hop in looking for a fight. The three immediately destroy the bio-warriors, so Jaguar has no choice but to deliver his ultimate warrior….Bio-Broly. That’s right, somehow Broly has returned. It turns out that the shaman from Broly – Second Coming took some of Broly’s dried blood and sold it to Jaguar, because he was exiled from his village and needed work. Goten and Trunks are about to unleash a Kamehameha wave to destroy the clone of the Legendary Super Saiyan, but it ends up being too late and he breaks out of the tank and begins a full scale attack. Due to Broly’s raging attacks, the fluid that was used to keep the bio-warriors in their tanks is released and exposed to air, which causes it to become highly acidic and burn through everything it touches. Broly is dunked in the fluid and becomes deformed (honestly, kind of disappointing and ruined one of the coolest Saiyan character models in Dragon Ball Z). Goten and Trunks battle Bio-Broly as the acid devours the rest of the bio-warriors, the scientists, and even the shaman who sold Jaguar Broly’s blood. Krillin ends up saving Android 18, but ends up being defeated by Broly in the process. Trunks ends up pulling a Gohan-style move and luring Bio-Broly underneath a massive tank of the bio-fluid in an effort to defeat him by drenching him in the acid. It works, and they end up trying to get everyone else off the island, but Dr. Collie warns them that the planet is doomed to be consumed by the fluid. However, Goten realizes that the fluid turns to rock when it comes in contact with sea water, so Goten, Trunks, and Krillin all let loose a massive Kamehameha wave into the water to envelope the entire island and solidify all of the liquid. Bio-Broly then pops up once again as a massive skyscraper of a being, but is instantly turned into a rock and shattered by yet another Kamehameha wave from Goten and Trunks. Meanwhile, in Other World, Goku receives a communication from King Kai – through Bubbles – that he is to stop Broly in Hell.

The animation for Dragon Ball Z: Bio-Broly continues to be solid, but not as solid as the previous Broly movies in the series. It’s nowhere near bad, but I have to say that the deformed Bio-Broly definitely took away from a lot of what made Broly…Broly. I really wanted to see his actual character model for the duration of the movie, but instead we got Swamp Thing.

So, does Dragon Ball Z: Bio-Broly continue with the Broly trilogy’s legacy of being must-see Dragon Ball Z movies? Well…no, not really. Honestly, pretty much this whole movie was a massive let down, and I think that Broly could have been finished with Second Coming, or he could have been handled much better than how Bio-Broly handles the character. I guess we’ll just have to watch Dragon Ball Super: Broly to find out if he’s redeemed!