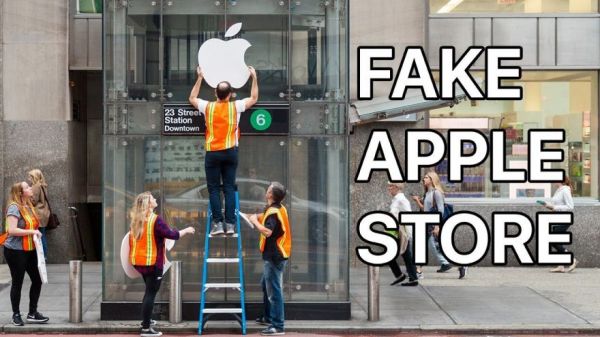 Are people really this gullible? It would seem so since person after person stopped by to view the new “Apple store” that was setting up shop at the 23rd Street Subway Station in Manhattan. It seems that just putting up the Apple sign is enough to get anyone’s attention, but when you make it seem as though people have formed a line trying to get into this new place then obviously it becomes a demand that people can’t ignore. I’m still wondering just how people fall for something like this since the likelihood of a new store being set up so easily and in broad daylight is something that boggles my mind.

Do folks in Manhattan ever take enough time to realize when they’re being pranked? Obviously a store’s not going to open up overnight in a subway. Unless I just don’t know enough about life in New York I even realize that stores popping up overnight doesn’t happen. All the hype and promotion that goes into a store, even it’s temporary, would be enough to warrant an actual line of people outside the glass cube, not just a line of actors that are there to make people think that the hype is real.

I still don’t understand the hubbub about Apple stores to begin with but that could be because I’m more of a Samsung person. The iPhone just doesn’t hold the same appeal to me as my own phone does. Yet a lot of people feel this nuts about the iPhone since every Apple store I’ve ever passed has been half-full to jam-packed with people. Apple products must be that good or that popular for the name brand, I’m not sure, but obviously there’s something there that attracts the average consumer.

Plus I get the impression that either the city allowed this after Apple asked permission, or this was happening out in the open where anyone could see and was therefore an illegal prank that people didn’t seem to mind. Obviously the former is more reasonable than the latter, but the reaction of people walking by in a city where everyone has seen everything and done everything, or at least has the attitude, is kind of amusing. It seems to take so little to get people’s attention at times, but only if the product being displayed is something that is trendy, popular, or something that for some insane reason everyone seems to want.

I’ll admit it, I really don’t get the rush for Apple products. After looking at countless reviews for these products vs. other companies they don’t seem to stack up at times despite the fact that some of their products are impressive. They seem like another brand name product, that’s it. Throw facts at me, throw stats, throw sales numbers, it won’t matter since like a large number of people it still stands to reason that a phone is a phone and a computer is a computer. They work in roughly the same way no matter their appearance or their packaging. Some have different capabilities and some have different appearances, but the truth of the matter is that if it works, then it’s useful.

The idea of people going nuts over an item simply for a brand name is kind of nutty.