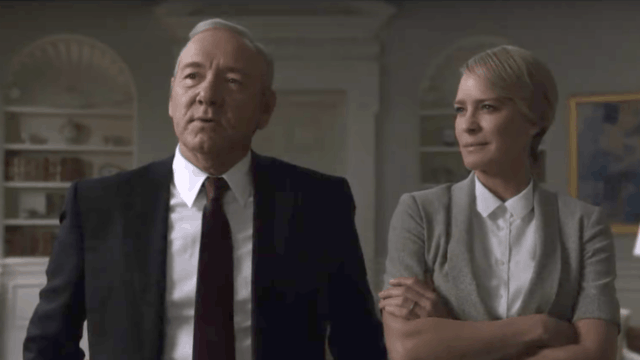 As if we don’t already have enough amazing shows on our plate coming out in the next couple of months, Netflix just released the season 5 trailer for House of Cards on Monday.  The â€‹fifth season also stars Michael Kellyâ€‹, â€‹Jayne Atkinsonâ€‹, â€‹Neve Campbellâ€‹, â€‹â€‹Derek â€‹Cecil, Paul Sparksâ€‹ and Joel Kinnamanâ€‹.  As far as what we can expect,  the show picks up right where season 4 left off.

Spacey’s character Kevin Underwood is in a tense election battle and he’s also struggling to remain in a relationship with his wife Claire (Robin Wright).   In the trailer (below) Underwood claims that American citizens are in need of constant supervision and he promises to provide it in one way or another.    Actually he more or less promises to “rule” over them regardless of term limits or probably anything else.