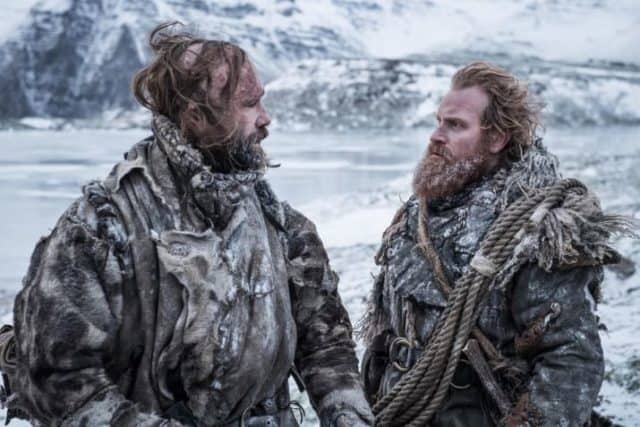 It’s like a switch is thrown when they go from the screen to off screen. Tormund and the Hound don’t really get along on the show but behind the scenes they’re making videos now that might just leave you in tears from laughing so hard or shocked silence thinking “what did I just watch?”.  Is it a legendary video? It suppose that really depends on who’s watching now doesn’t it?

I couldn’t help but hear it, and you will too, that the Hound is singing “Take your lady friend”. I wonder if that’s a nod to Brienne and the fact that Tormund is infatuated with her and the Hound lost a fight to her? It would be an interesting homage and possible tie-in that many fans who like to over-scrutinize the show might decide is worth having a look at and dissecting for hours on end.

But for those of us that just like to sit back and enjoy let’s just say this was a funny and spur of the moment video that we can laugh at. The Hound and Tormund are sure getting a good laugh.

Now getting down to it, the events of tomorrow’s show are still looming and there’s no real idea of just who’s going to make it past the finale and who’s going to be left come season 8 if it actually is finished and ready to go on time. Remember, the creators of the show aren’t seeing it happen for nearly another year or longer depending on how things go.

Right now though the main concern is whether or not the finale is really going to bring the war to a head or if it’s going to be a giant tease that makes us wait until the next and final season. That seems like it would upset a lot of people and possibly cause the show to lose a lot of viewers just out of spite. Maybe that’s one reason it’s being scheduled so far out, so anyone that’s upset by the finale will have enough time to get over it and forgive the show for leaving  things in such mass disarray. Let’s hope not.

But where are Tormund and the Hound going to be at that point? So far we’ve seen them both come close to death. The Hound got his butt soundly kicked by Brienne and was tumbled off of a cliff, making us all think that he was as good as dead. But obviously he’s too stubborn to die or the gods don’t want him, because he’s back on his feet and back in the thick of things.

Then there’s Tormund, who was the mortal enemy of Jon Snow and the other Night’s Watchmen, but is now one of his strongest allies. The red-haired wildling was thought to be dead at one point during the Battle of the Bastards, as were a lot of soldiers, but he scrambled out of that and came through. Then he almost bought it again in the previous episode when the wights were falling all over themselves to tear him apart. Tormund seems to be one of the luckiest men in Westeros considering how often he puts himself into the middle of a fight.

It’s hard to speculate, but at least they don’t seem to be sweating over the fate of their characters.

When you've had to much trailer time… #behindthescenes #got7