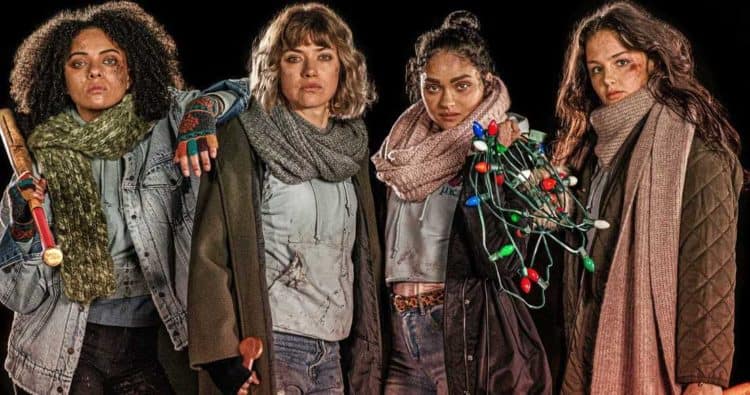 Blumhouse has definitely gotten into the ‘future is female’ attitude with the remake of Black Christmas, and in a couple of ways it looks great to be honest since it’s kind of blowing up the old stereotype of the helpless women that can’t save themselves. It’s enough to make some people roll their eyes and even cringe but to be honest it’s easy enough to push past that and just have fun with it. The original Black Christmas was released in 1974 and didn’t really go into who the killer was as much as people might have liked, but this version seems to indicate that it’s not only going to tell who the killer is, but will have the young women fighting back in a big way. You can argue the point that this is quite interesting and definitely brings a new and exciting dynamic to this movie since women being able to stand up and defend themselves is nothing short of great since it eliminates the need for the ‘white knight’ male to come crashing in and save the day. Finding women that can stand up for themselves in this day and age is great, but where it becomes cringe-worthy is that it does seem to assume that men are the issue in one way or another, whether they’re the unstable killers or the petulant or somehow good but still less than needed bunch that hang around these tough and determined women.

Petrana Radulovic from Polygon takes it further by going into the trailer and admitting that the movie is different in that the killer isn’t just an unbalanced individual that is killing people for their own reason, but is an individual, or group, that has been doing this kind of thing for a while. This would almost suggest that the movie is less of a remake and more of a continuation, but it’s still going on the premise that it’s a reboot, which is all well and good since it holds to the core story while creating its own narrative which might actually be more successful. Barring the gender debate that might be brought up about the movie, hopefully not, this does look like something that could be one of the better or at least more desired movies of the winter. From a personal standpoint I’ll say that the story is infinitely more important than anything else within the movie, and thus far this story looks like it’s going to be just as simple and as straightforward as the original, but it’s definitely going to allow the women to fight back in a big way. How this will go is yet to be seen but from looking at the trailer it might actually be something that livens it up quite a bit. Slasher movies are after all pretty stereotypical and have been for years. But in recent times they’ve been changing just enough that it’s been great to watch since it’s indicated that the action no longer belongs to just the men, as the women are getting in on the act and actually pushing for equality in terms of the threat and their response to it.

Jude Dry of IndieWire definitely brings the male vs. female issue back into the light however as it becomes obvious that in the movie men will still be seen as potential predators/killers while the young women are going to have to question every man that comes near them and arm themselves to insure that they’re not going to be anyone’s victim. That’s all well and good but it’s a big hope that the movie will remember that it’s a slasher film and not something that’s meant to divide people any further than has already been done throughout the last few years. While messages and meanings are rampant within many movies it’s become something that people are growing rather tired of since hidden messages in movies that have to do with prominent issues in society are becoming more and more problematic as people are tired of being preached to in order to push another agenda. The truth of the movie is that the women do have to suspect just about everyone but it’s interesting that they would immediately be suspicious of men and wouldn’t ever think that another woman could be responsible. After all there have been plenty of female killers throughout the years when it comes to the movies, but of course few want to believe it’s that relevant in this day and age considering that men are often though to be more violent and more destructive.

Letting go of all of that, since it’s a continuing argument that’s become quite tiresome, this movie looks as though it might be worth watching if only because it might be an exciting and thrilling movie and could promote a positive image of strong women.