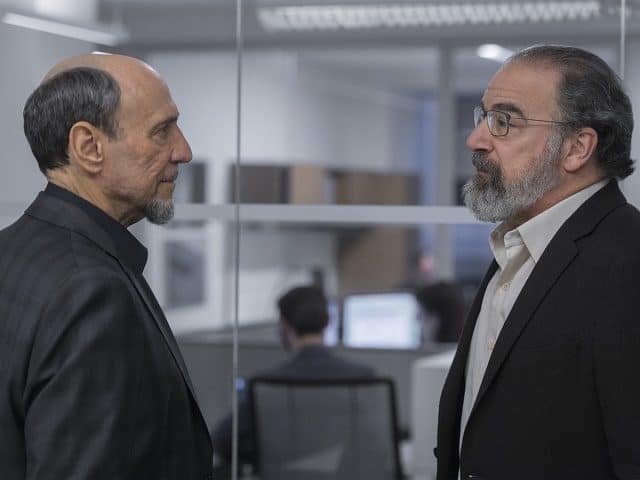 Dar Adal has been on the fringes of every major storyline in Homeland Season 6, but it has been unclear up until this point what his purpose would be this year. Was he just there to be a thorn in everyone’s side, to cause problems for Saul at the CIA and put pressure on Keane, or was there something more sinister to his actions this season? Well, “Imminent Risk” finally gives us a definitive answer on what Dar has been doing over these past seven episodes, as his connection with the man across the street is revealed, proving that Dar truly is Season 6’s main villain.

Is this reveal a major surprise? Not particularly, as Homeland has shown Dar in opposition with pretty much every other character this season. Whether it’s Carrie, Saul, or President-elect Keane, Dar has continuously been clashing with people, so when we do get confirmation that he was not only behind the explosion in New York but also Children Services taking away Frannie from Carrie, it makes perfect sense but it also puts Homeland in a place that it’s never been before with Dar. With so many people’s lives being affected by Dar’s actions (and in the case of the bombing, people losing their lives), there’s no way that the series can walk back what he’s done and try to re-establish Dar as someone who might be doing the wrong thing for the right reasons, as someone that we could possibly root for. Dar has always been shady and his morality has always been questionable, but the things he has done in Season 6 are unforgivable; he’s committed crimes all for the sake of his agenda, and he needs to be taken down.

It appears, though, that if anyone is going to get the better of Dar it will be Saul, who recognizes the type of game his friend and colleague is playing after he’s questioned about his time in the West Bank for long enough that it could hinder his plans to meet with Javadi. Dar and his men aren’t able to prevent Saul and Javadi’s conversation from taking place, though, despite the extreme lengths they go to (in Javadi’s case, those extreme lengths include torture), and the result of their talk may be Dar’s undoing, as Saul plans to bring Javadi to President-elect Keane so that she can hear it straight from him that Iran is not cheating on the nuclear deal. Could there be any better way for Dar to be served justice than by Keane herself?

Maybe there could be, because as personal as Dar has made things between him and Keane, he goes one step further with Carrie, informing Children Services of the apparent danger that Frannie is in so that she is taken away from her mother and, for the foreseeable future, forced to stay in foster care. If you had told me three years ago when Homeland first revealed that Carrie was pregnant that I would be this invested in a storyline focusing on her daughter, I wouldn’t have believed you, but every Frannie-centric part of “Imminent Risk” is an emotional gut punch, as we see the pain, fear, and utter hopelessness that Carrie experiences because of Dar’s input. And perhaps the worst part about it is that Carrie has no idea that Dar is the one pulling the strings; she just believes she’s been dealt a terrible hand, which is why she finds herself drinking and calling Keane to ask for help in her moment of despair.

While Saul’s path to taking down Dar Adal seems to clearly be headed towards Keane, Carrie remains a wild card until she finally puts the pieces together and connects Dar with the explosion in New York and Sekou’s death. If there’s one thing to complain about in “Imminent Risk” and Season 6 as a whole, it’s been the lack of contact between Carrie and Saul; the two of them have only shared one scene together this season, and one can only hope that their current goals lead them on a collision course. Homeland is always at its best with Carrie and Saul are working together, and there hasn’t been nearly enough of that this season.

And what about Carrie’s other ally, Mr. Peter Quinn? Well, thanks to Dar’s influence again, it looks like Quinn and Carrie might not be as friendly as they once were, as Dar tells Quinn that Carrie is responsible for his current state because she chose to woke him up from his coma despite all the risks that the doctors warned her about. We also discover that Astrid broke Quinn out the mental hospital last episode on Dar’s orders, and that Quinn staying out of sight and out of mind is part of some type of deal Dar struck to keep him out of jail and the hospital. It’s also clearly another move by Dar to try to keep the cover-up behind the bombing a secret. Quinn and Carrie were closing in on the truth, but if the two of them are separated, and worse if the two of them don’t trust each other, then who will be able to figure out that Dar is truly the one responsible? Hopefully, one of them can realize sooner or later that Dar’s the puppet master controlling everything and ensure that he faces the harsh consequences that he deserves for the crimes that he has committed.

What did everyone else think about this week’s episode of Homeland, and what are your thoughts on Season 6 as a whole since we’re past the halfway point of the season now? Comment below and let me know.

Carrie receives terrible news about Frannie, and the truth about Dar Adal is revealed in a stellar episode of Homeland.