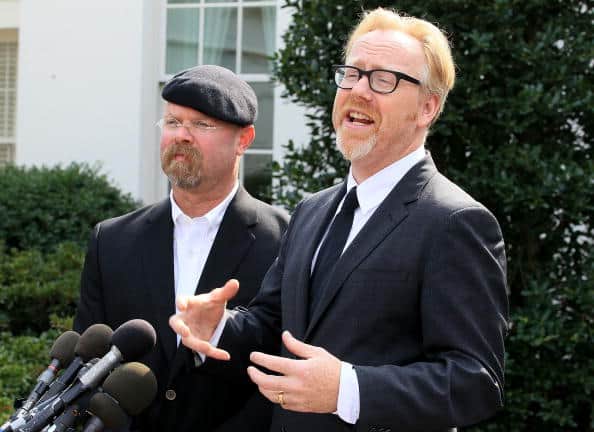 MythBusters is back with fresh new episodes this month. Some of the myths the team will be investigating include different explosive scenarios found in movies, finding out if a piano could crash through a roof, and determining if someone could bob for an apple while jumping from 100 feet high attached to a bungee cord. The team has been proving or disproving myths for the last 11 years but there are still a few things you may not know about this popular reality show. Check out these 15 fascinating facts about the Discovery Channel’s MythBusters. 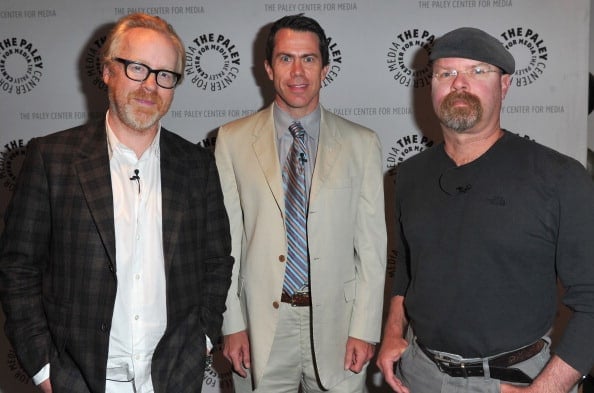 1. Robert Lee has been the narrator of MythBusters since it began in 2003. Lee has narrated other specials and documentaries including the TV series Is it Possible? and Medical Incredible. Additionally, Lee has lent his voice talents to the MTV Australian Video Music Awards in both 2006 and 2007. Lee has two acting credits to his name, as well. In 1994, he played a radio announcer in the comedy Dallas Doll, which starred Sandra Bernhard. In 1999, Lee played Cult Video Reporter in the drama Holy Smoke that starred Kate Winslet and Harvey Keitel. 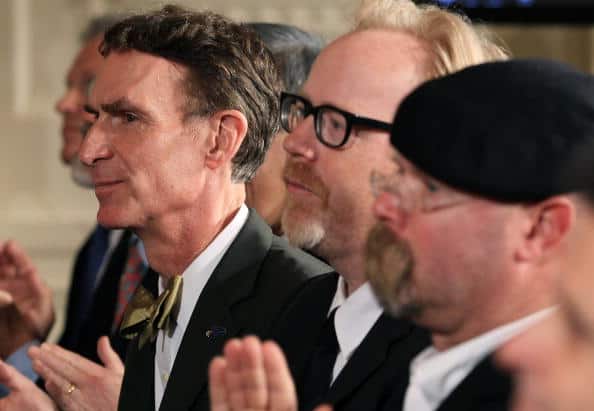 2. When watching an episode of MythBusters, you may notice a disclaimer at the beginning of the show. The disclaimer asks viewers to refrain from reenacting any of the experiments shown. The same warning will be shown again halfway through the episode. These disclaimers do not appear on episodes of MythBusters in Australia, the Netherlands, Sweden, and New Zealand. Sometimes the disclaimer, if shown in these countries, will be treated as humorous with either Jamie or Adam hitting one another with a baseball bat and explaining to viewers that they are professionals. 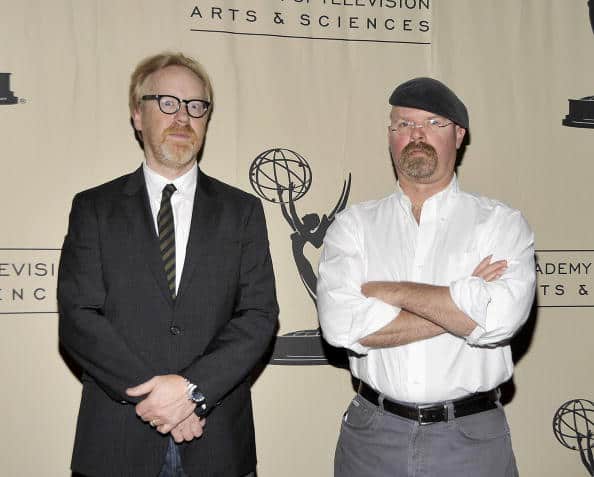 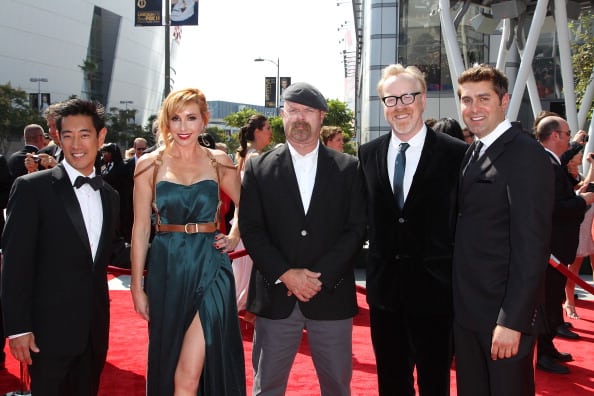 4. If you want to see MythBusters in person you are in luck. Beginning in 2007, an idea went into development to create a traveling museum based on the television series. In 2012, MythBusters: The Explosive Exhibition premiered at the Museum of Science and Industry located in Chicago, Illinois. The show is currently on display at the Discovery Science Center in Santa Ana, California until September 7, 2014. In October 2014, the exhibit will be shown at the Fort Worth Museum of Science and History located in Fort Worth, Texas. The tour visited Australia earlier in 2014. 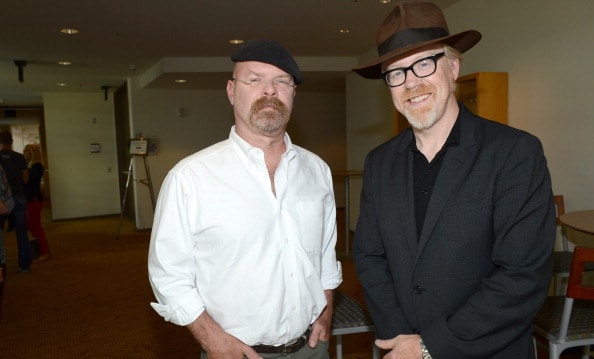 5. The concept for Mythbusters was created for the Discovery Channel as the working title Tall Tales or Truth. The idea was put forth in 2002 by writer and producer Peter Rees, who is from Australia. The idea was initially rejected by the network because they were already developing a television show with a similar idea. After Rees slightly changed the concept, the Discovery Channel picked it up for a three episode pilot. Rees approached Jaime Hyneman to make a video for the network to see his expertise and cast him as a host. 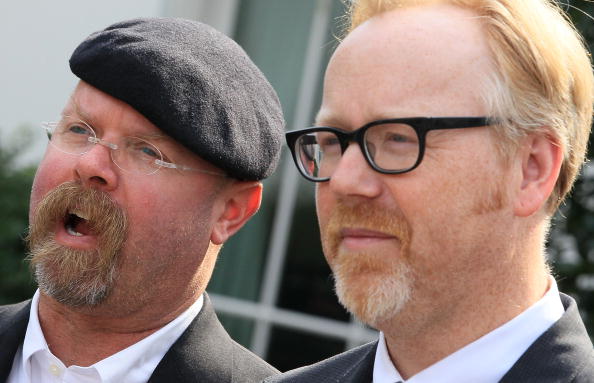 6. Host Jaime  Hyneman gets much of the experience he showcases on Mythbusters from his background in visual and special effects. Hyneman started in the industry of special effects in the late 80’s when he worked on the hit movie Top Gun. Though he did not receive a credit for his work he was able to gain further job experience as an animatronics technician for the Robin Williams movie Flubber. Hyneman also worked on the second and third movie of The Matrix. Hyneman currently owns his own special effects company called M5 Industries. 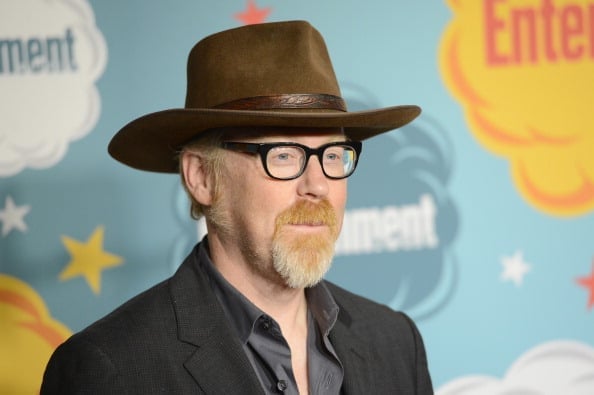 7. Before being a part of the MythBusters team, host Adam Savage worked as a graphic designer, set designer, animator, and film developer. He also built models for Galaxy Quest, The Matrix Reloaded, and Space Cowboys. His expertise in the field of model making led to a teaching gig at the Academy of Art University located in San Francisco, California. Early on in his career, Savage would voice animated characters that his father would create for the popular children’s show Sesame Street and played a stock boy in a commercial for Charmin. 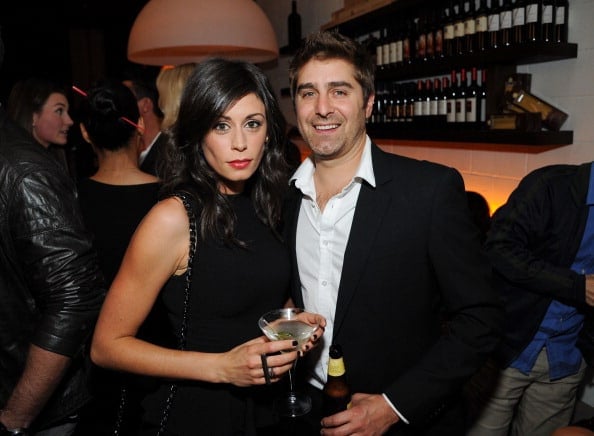 8. MythBusters host Tory Belleci first met Jaime Hyneman way back in 1994. At that time, Belleci began to work for Hyneman at his company M5 Industries as a stage manager. He would then become employed at Industrial Light and Magic, where he would work as a painter, sculptor, and model builder. Bellici was part of the modeling team for the movies Star Wars Episode I: The Phantom Menance and Star Wars Episode II: Attack of the Clones. Some of Belleci works of art include The Federation battleships and podracers. Even though he was not on screen at first, Belleci has been a part of MythBusters since 2003. 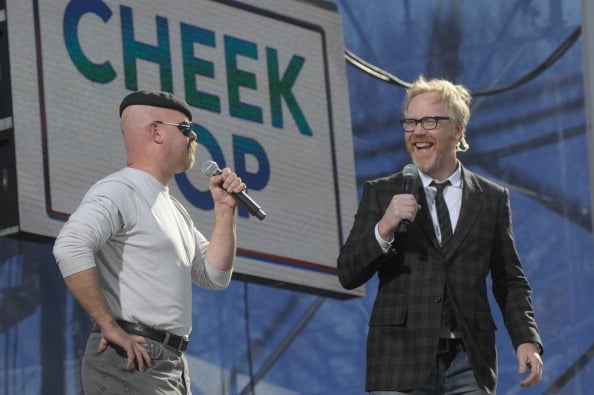 9. Mythbusters has received numerous accolades since it premiered in 2003. The show has been nominated five times for an Emmy award in the category of Outstanding Reality Program from 2009-2013. In 2008, the documentary was nominated for an ASTRA award for Favourite International Program. The show was a nominee in the category of Best Reality Television Series at the Critics Choice Television Awards in 2014. In 2006, MythBusters won a Young Artist Award for the category of Social Relations Knowledge Institute Award. 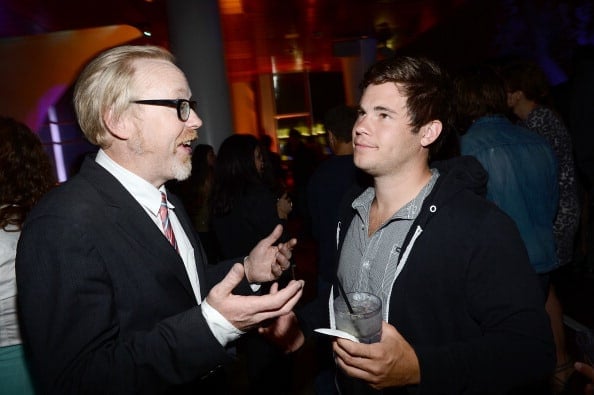 10. MythBusters host Grant Imahara graduated from the University of South California with a Bachelors of Science degree in Electrical Engineering. At one point, Imahara considered changing his major and become a screenwriter. After graduation, Imahara worked as an engineer at Lucasfilms and for Industrial Light and Magic. Some of the films he has been a part of include The Lost World Jurassic Park, Van Helsing, Galaxy Quest, AI: Artificial Intelligence, Terminator 3: Rise of the Machines, and Stars Wars Episodes I, II, and III. 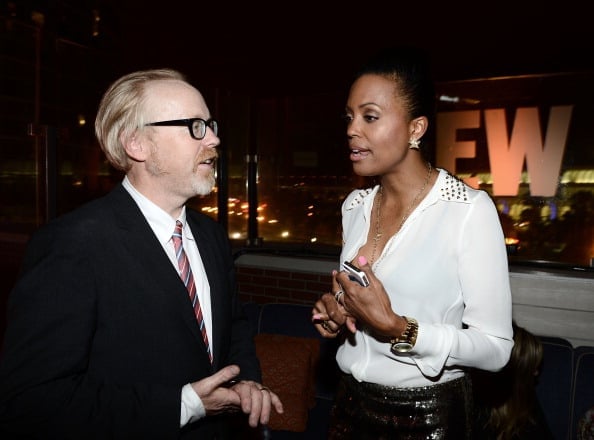 11. There are some myths that MythBusters refuses to investigate. One of the most obvious topics is that of extra terrestrial life. These myths cannot be tested because there is no scientific method to prove the existence of alien lifeforms. The program will also avoid any myths where animals will be harmed. The one exception was the episode where cockroaches were given deadly doses of radiation. The insects were raised for experiments of this nature. The show also tries to not test any conspiracy theories or subject matter that the Discovery Channel or its advertisers does not endorse. 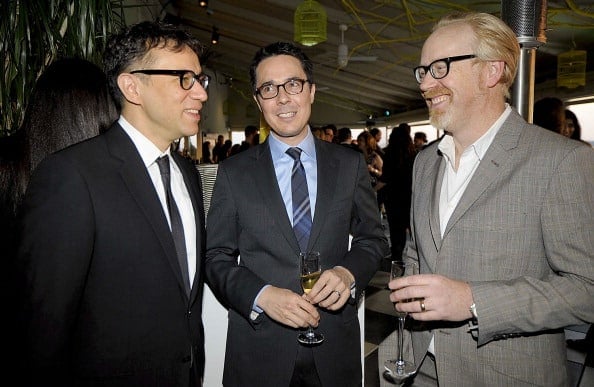 12.  The Consumerist, a consumer affairs blog, reported that Discovery Channel pulled an episode of MythBusters because they did not want to upset some of their advertisers over the topic. The MythBusters team was going to examine Radio-frequency Identification (RFID), which is the use of electromagnetic fields to transfer data. The Consumerist claimed Discovery Channel preempted the episode in fear that credit card companies would be upset with the content and cancel their advertising from the network. The production company behind the show that stopped the investigation.

Photo by Riccardo Savi/Getty Images for The New Yorker 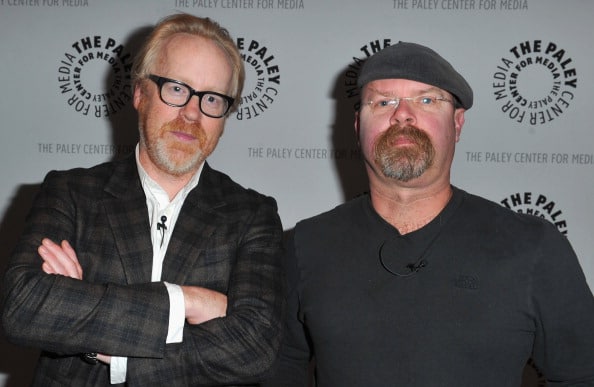 13. A majority of the material for MythBusters comes from what the public wants to see. Because of this, the reality program has moved past the original concept of the show, which was to strictly deal with urban legends and myths. The show wants to focus on ideas from fans and as a result now deals with misconceptions involving movie stunts or the origins of popular sayings. In an interview with FHM Hyneman said, “Discovery has found anything that we find interesting personally, makes us passionate about exploring those things and makes for good TV.” 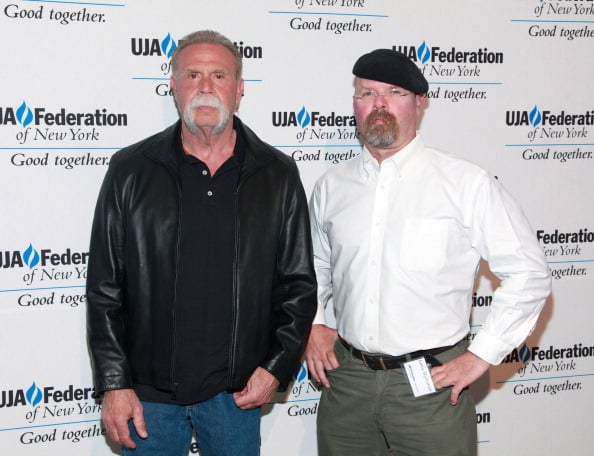 14. Over ten years and more than 200 episodes, you would think that accidents would occur quite frequently on the set of MythBusters. However, that is not the case.  The team always practices safety first, which is why a disclaimer airs before each episode. In an interview, Jaime Hyneman admitted, “Worst thing that we’ve had happen are broken fingers from handling the heavy blast protection panels that we use. They weigh at least a couple hundred pounds and they–if you don’t handle them carefully– will break your finger or hand or foot.” 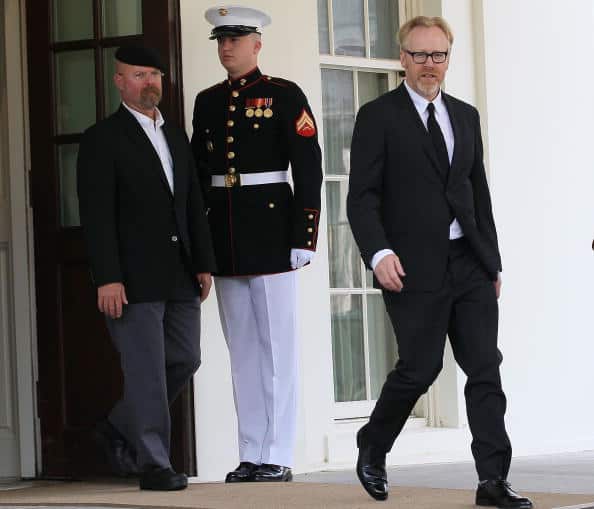 15. On December 6, 2011, the MythBusters team sent a cannonball through the side of a house and into a van parked on the street in a neighborhood located in Dublin, California. The experiment was being oversaw by the police from the area, but the cannon flew over its intended target by 700 yards. The ball left a 10 in hole in the side of the home and destroyed the window of the minivan. Luckily, no one was harmed. Savage and Byron would later participate at a school function to mend ties with the disgruntled community. An apology was also shown when the episode aired.