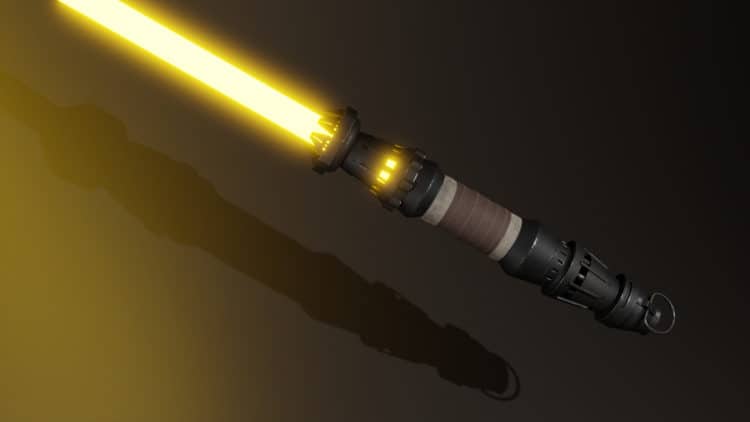 Lightsabers are one of the most iconic weapons to ever come out of science fiction. On top of that, they aren’t the tools of the general population in the Star Wars setting. Instead, lightsabers are the special symbols of a select order of superhumans who have played a leading role in most events of note. Under the circumstances, it should come as no surprise to learn that lightsabers have been much elaborated upon by supplementary works. In particular, those supplementary works have focused upon the crystal that provides the lightsaber with its power. Please note that this is one of the topics that have diverged between the Canon version and the Legends version of the Star Wars setting. As a result, if people are interested in it, it is a good idea for them to figure out which one is being discussed at any one time.

First, the Canon version says that lightsabers are powered by kyber crystals. These are special crystals that are Force-attuned in their own right, which is presumably connected to the fact that they exhibit a kind of “collective consciousness” that comes close to sentience. On the whole, kyber crystals are very rare. However, they are interesting in that they can be found in a wide range of places on a wide range of planets, with some locations being more bountiful than others. In particular, the Jedi were known to get them from the Crystal Cave on the planet Ilum. Besides this, it is worth mentioning that the same properties that made kyber crystals useful for making lightsabers also made them useful for making other weapons. This can be seen in how they were used to create the Death Star’s laser.

Second, the Legends version says that lightsabers are powered using a wide range of gems, crystals, and other objects. Generally speaking, these came from a small number of select locations, which happen to include another so-called Crystal Cave found on the planet Dantooine rather than the planet Ilum. However, there have been much more unusual choices as well, with examples ranging from physical remains to special, purpose-made machines. Something that is perhaps unsurprising considering that the Legends version includes a number of video games in which interested individuals could use different lightsaber crystals for different lightsaber effects.

What Does a Yellow Lightsaber Mean?

The significance of different lightsaber colors hasn’t been elaborated on much in Canon. Still, there have been some mentions here and there. For starters, kyber crystals are colorless until they have bonded with a particular user, at which point, they change color to match said individual’s nature. In most cases, this results in either a blue lightsaber or a green lightsaber. However, Canon has provided plenty of examples of other colors, as shown by the Darksaber as well as Mace Windu’s purple lightsaber. Red lightsabers are exceptions to this rule. The lore says that kyber crystals are attuned to the light side of the Force, so much so that they will resist dark-side users. Unfortunately, it is possible for the latter to dominate them, thus causing them to exhibit the characteristic red of Sith lightsabers.

Different lightsaber colors took on less significance in other periods. For example, the Jedi of the period before the Clone Wars tended to use either blue lightsabers or green lightsabers because most of them got their lightsaber crystals from a very small number of sources, thus limiting the range of colors that saw use. There were still Jedi who used other colors, but they were much rarer. Once the Empire came into existence, the circumstances changed. Force users were forced to use whatever was available to them because the traditional sources had been cut off. This remained true even once the Emperor had been removed, thus permitting the founding of the New Jedi Order. To an extent, this was because said organization encouraged a greater degree of individuality. Something that was perhaps unsurprising considering the very wide range of ways by which its members joined up.

In any case, the Star Wars franchise continues to see new works being released on a constant basis. As a result, it seems safe to say that the significance of lightsaber colors will come up again in Canon. After all, lightsabers are the special weapons of the Jedi, meaning that they have a special position in the franchise as a whole. Furthermore, it seems likely that the franchise will explore other periods of history in the setting, which should provide insight into how these things have changed over time. Something that should prove interesting because the Jedi have never been static over time.