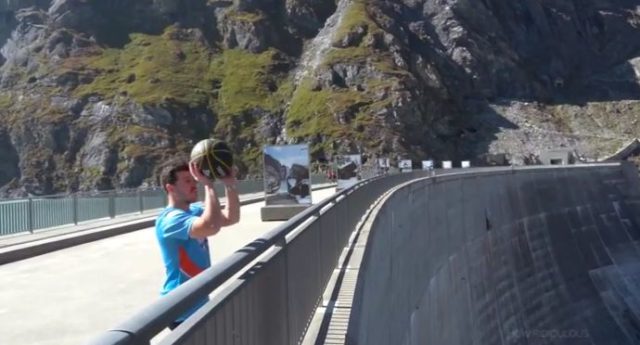 You know all those crazy trick videos of guys shooting ridiculous basketball shots?  Sometimes it’ll be from 100 feet away.  Other times the ball will bounce off a few walls.   The reality is that a lot of these shots take an obscene amount of takes before they finally go in.  For a video that lasts only a few minutes it might take weeks to film it.  But today it seems we’ve been gifted with a world record basketball shot that apparently took only three tries to make.  While I find that hard to believe, this is kind of cool to watch.

The thing that bothers me about this video is that this guy has terrible form.  Another thing I’d have like to have seen is the “highest dunk.”  Can’t someone parachute off of there and dunk the basketball or something along those lines? I mean I guess it’s kind of cool to watch a world record like this but honestly it’s a little anti-climactic.  I think watching a game winning three pointer is a lot more interesting than this.

You be the judge.