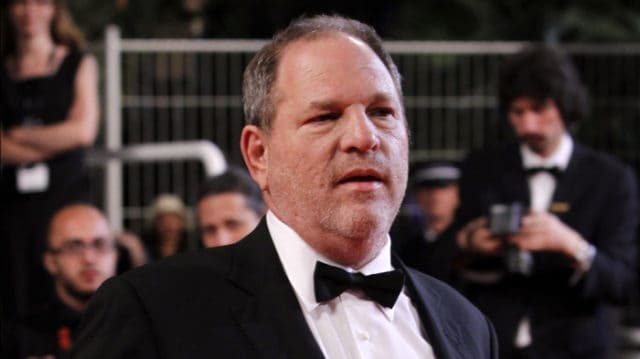 It’s a pretty obvious question, right? Harvey Weinstein should eventually be getting fitted for an orange jumpsuit and ordered to serve time away from his luxurious estate for a very long time. But will he? Probably not. Is that justice? If you said yes then do all of us a favor and look away now please. No, just look away, it’ll be better for the rest of us, honestly.

Harvey Weinstein has no defense, NO DEFENSE. Even his lawyer isn’t disputing WHAT he did, only WHY he did it. And really when you think about it is sexual harassment a WHY kind of thing? Is there any reason why a guy in his position should be stopping women in the hall and making them wait until he’s violated the nearest potted plant? Nope, I can’t think of any reason.

Oh but wait, he’s friends with the POTUS, he’s on good terms with the Clintons, he knows people all throughout Hollywood, he’s connected here, there, and every which way from Sunday you could possibly imagine. So no, Weinstein probably won’t go to jail and for one reason only. Famous people don’t often do time.

Now you could argue that fact and show picture proof of people being booked and stories of celebrities being held overnight or even for a short amount of time. But you won’t find a lot of celebrities doing hard time for the crimes he’s being accused of. He might pay a few fines, get a slap on the wrist, and then go back to his comfy home and cry his piggy eyes out, but I kind of doubt if Weinstein will ever get to see a dingy little cell made up all for him, where he might be the one told to wait while the guy in his cell does his business.

Come on, haven’t you noticed by now that those in high places tend to take care of each other even if they turn their backs? There’s already a couple of stars sticking up for him. Granted, Lindsay Lohan isn’t the best character witness he could ever hope for but at this point you have to believe that Weinstein would probably accept any friendly face on his side, especially since rumors are flying that his wife could possibly be the next person to cut him loose. The only reason she might not is that his name is the reason her business exists. Without him the road ahead could be a little rocky.

IF Weinstein goes away, and that’s a humongous ‘if’, it would mean that wheels of justice didn’t get greased enough and someone sitting behind their bench is about to suffer some of the harshest criticism and more controversy than anyone can shake a stick at. And you know what? The rest of us should give that person a round of applause for finally picking at the decaying threads that have infected Hollywood and for so long. Unravel the whole rotten tapestry and see how many rats and roaches fall out. It should be an interesting spectacle if it ever happened.

You get the feeling it won’t, but it would still be something to watch.