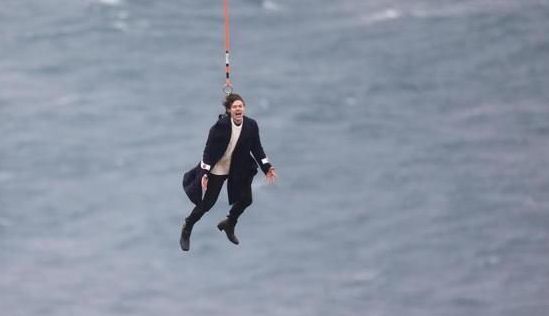 I’ve avoided paying any attention to the hype that Harry Styles is getting this week.  I mean the guy has created a trailer for his new video?  Come on man.  We have trailers for music videos now?  What the hell is going on?  And P.S. we still have music videos?  Since when?  What channel are they played on?  Don’t get me wrong, I take nothing away from Harry Styles and hope that his role in Dunkirk comes off as a success but I’m not of the Harry Styles generation and don’t understand how a dude whose hair looks like it’s been rolling around in horse manure is this popular.   But I digress.

Despite my non coverage of Mr. Styles, this beautiful picture of the eventual “Sir” Styles hit the internets recently.  It’s Harry Styles dangling from a helicopter while shooting his new music video.  The response from the internet has been pretty fantastic.  In fact it’s lead to a Photoshop battle that’s sure to go on for the duration of today and possibly tomorrow.

We’re just getting started here but let’s have a look at some of the Photoshops created from this picture thus far:

Harry Styles and the Chamber Of Secrets (2002) pic.twitter.com/dSX6wTwnVT

I came in like a wrecking ball I never hit so hard in love, all I wanted was to break your walls
All you ever did was break me
You wreck me pic.twitter.com/OOc4JVskHa

Our attempt in the Harry Styles Photoshop game… 😁

@Harry_Styles im loving your collaboration with Disney in Up pic.twitter.com/I67hug241t