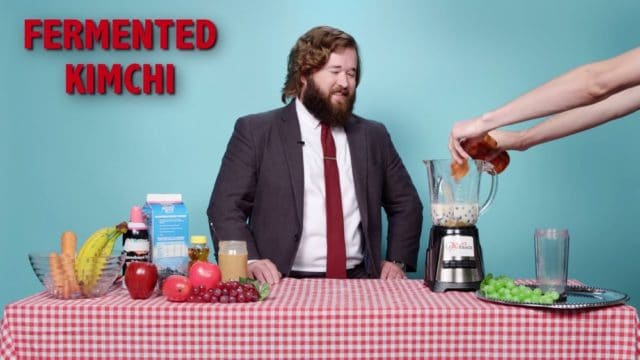 Remember when the worst thing Haley Joel Osment saw was dead people? He’s fallen a way since then it would seem. He’s no longer the cute kid that saw ghosts or even hung out with two old codgers on the front porch while they shot at traveling salesmen. Now he’s the guy that sits and tries to answer trivia questions and has to look forward to drinking something nasty for every wrong answer he gets.

To keep it real, this isn’t really all that Osment does these days. He’s still been productive on Broadway, done some voice acting, and still does have a career. But seeing him in skits like this does indicate that he’s nowhere near the star he was when he was younger. Back then he had a promising career and looked like he would be going places. One of his first ever appearances was as a young Forrest Gump Jr., and then he would go on to play the character of Cole in The Sixth Sense. After that he was a well-known name and went on to star in the unfortunate flop that was AI: Artificial Intelligence. This could have been a great movie save for a lot of different things. For one, the premise got all screwed up about a third of the way into the film. Osment’s career kind of took a nosedive after that, but was saved from total obliteration by his role was Walter in Secondhand Lions where he starred alongside screen legends Michael Caine and Robert Duvall.

Despite being passed over and largely forgotten Secondhand Lions was perhaps his best film since The Sixth Sense. He might not have been a little kid any longer but he was definitely young enough to be effective as a lead character in the film. Plus, it was a touching story about a young man that had been hurt far too often by the last person in the world you would expect, his mother. His elderly uncles take him in, reluctantly, and eventually come around as they bond and start to learn from one another. The “everything a boy needs to know about becoming a man” speech by Robert Duvall is especially touching.

As of now though he’s definitely too old to have that cute kid mien any longer and chances are his career might never hit those heights again unless he finds some way to connect with audience on the same level as before. Give him some credit though, he didn’t just fade off into the background as other actors have done when realizing their best efforts didn’t amount to much. Osment has hung in there and continues to do so no matter that his star power has obviously dimmed a bit.

Shows like this tend to show that some actors will do a lot just to get attention, or will at least humor others by putting themselves through a bit of momentary discomfort. Kimchee and hot dog water though, bleach. I’m not surprised he found it hard to open his mouth.