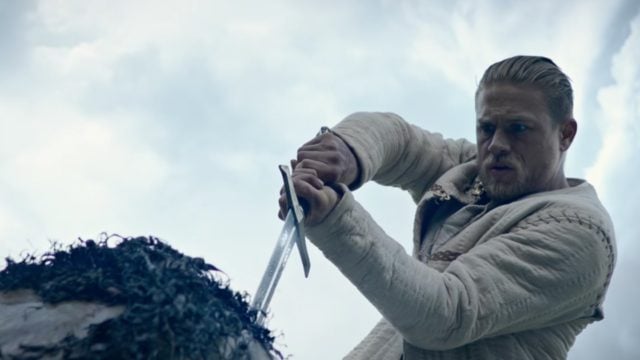 There are too many movies coming out in the next couple of month.  Seriously.  My brain is getting warmed from all the stimulation.  I honestly can’t take it right now.   It’s probably why I’ve completely stayed away from anything involving Guy Ritchie’s King Arthur: Legend of the Sword which stars Charlie Hunnam and Digimon Hounsou.    All indications point to a film that’s got potential to wow audiences.  It’s a very different take on the legendary tale and it of course has the Guy Ritchie camera work we’ve all come to know and love.

Up until this point we haven’t really seen too much in depth analysis or interview about the film from its creators and actors….until now.   I came across this video earlier today and it’s an in-depth 25 minute interview that should answer a number of questions we all have about the film.  Here’s a description of the video:

Acclaimed filmmaker Guy Ritchie brings his dynamic style to the epic fantasy action adventure “King Arthur: Legend of the Sword.” Starring Charlie Hunnam in the title role, the film is an iconoclastic take on the classic Excalibur myth, tracing Arthur’s journey from the streets to the throne. Join Ritchie, Hunnam and actor Djimon Hounsou as they discuss the film. Interview at 692 Broadway in NYC for BUILD Series.