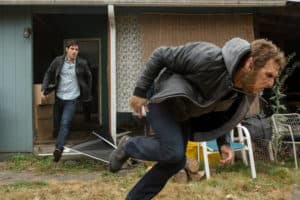 The case this week on Grimm is that of Donna Reynolds, a missing girl whose disappearance has been haunting Nick’s dreams and disrupting his sleep. The potential suspect to be looked into is Adrian Zayne, the maintenance man of the building that Donna had been in at the time of her abduction. Nick sees him burning photos of her and chases him outside, tackling him and punching him in the face until Hank makes him stop. Once brought in for questioning, it’s deduced that Adrian has no connection to Donna – he doesn’t have a functioning car in order to “haul” her and all they can tell from the charred remains of the photos is that they were actually photos. Nick, though, thinks that he had something to do with it and threatens him at the station, with Adrian (a Wesen) proclaiming that if something happened to him, it’d be Nick that did it.

Nick goes to the shop to get a confession serum from Monroe that had been originally developed by priests. He plans to shoot Adrian with a crossbow dipped in the serum and find out where Donna is before it’s too late; however, when he sneaks into the man’s house late that night, he finds out that it is indeed too late, but too late for Adrian. Nick finds him dead and strung up in the basement, multiple “G” symbols branded onto his body. The catch is that Donna had already been found thanks to Adrian calling 911 and confessing, but when later playing back the tape, it was apparent that the confession had been coerced and there was another person involved.

The symbol comes from an old school type of Grimm – the Endezeichen, a militant branch of Grimm that once branded every kill they made and painted the G on landmarks they took. They formed death squads meant to take out as many Wesen as possible, maiming them and disfiguring them when death could not be brought. The new Grimm calls Nick and brags about his actions before leaking the video of Adrian being tortured to the police, which forces Nick and Hank to head to Donna’s home to talk to her about what she remembered from her ordeal. Her kidnapping took place at 7:30 after she had come from the elevator and she had been taken away in a van that she didn’t see the outside of; Adrian was definitely there, but there had been another figure there driving the van, only she didn’t see who it was.

The van, the only of its kind to enter the parking facility that night, belonged to Richard Tyler Berna, another Wesen that immediately feared Nick upon seeing him. In his van were hair samples that matched Reynolds, fingerprints, and Donna’s purse, which should make for an easy conviction – if they can find Berna. He escaped out of the holding room that he was in and was found dead at his home later, branded in the same G symbol that was on Adrian at his time of death. It turns out that the new intern (Ryan) had been the one to let Berna escape and Nick has to find him before he hurts someone again; he kidnaps Bud and takes him to the Wurstner Auto Shop, where he plans to do the same thing to the Eisbiber that he did to Adrian and Richard. Ryan wants to get rid of any and all Wesen and be what he thinks Nick failed at – a “true” Grimm. Clad in a black cape and a black mask, Ryan nearly gets to make his third kill of the night before Nick chases him out of the shop and tackles him to the ground. Ryan had been obsessed with him and wanting to work with him for a while, but the “intern” is no Grimm. He’s a self-hating Wesen that Nick arrests and sends away for good.

Have We Met?
Once Juliette gets through calling Adalind’s law firm, where she no longer works, the vet gets a call of her own: from Captain Renard. Expressing concern about Nick being distracted lately and informing her that cops tend to keep things on the inside, Renard invites her to discuss things over coffee so they can have the time and privacy in which to talk. Once at the cafe, Renard begins questioning her about her coma, Juliette mentioning a “surge” that happened once she woke up. She tells Renard that Nick has felt like a complete stranger to her recently thanks to her memory not yet returning, though when he offers to help and puts his hand on hers, she gets uncomfortable and immediately leaves.

At the end of the episode, Renard comes by Nick’s house in order to return the glasses that she left at the cafe, pulling her in for a kiss that brings back her memory of the hospital and Renard’s original kiss. Juliette initially reacts in shock, but she allows him to kiss her again.

Additional thoughts and observations:
-I liked all the writing tweaks found here, but I kind of wish that we had spent more time with Ryan and had him become more of a person before pulling a reveal like this.
-I do love the concept of a self-hating Wesen, though.
-Next week on Grimm: Hank rethinks an old conviction and Monroe finds himself in an unexpected situation at the shop.