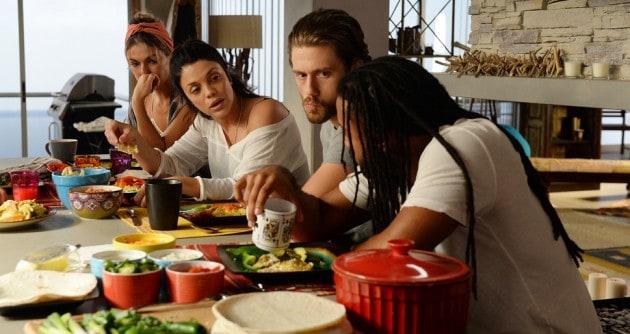 This week’s episode of Graceland, “Sidewinder,” begins pretty much where “PiÃ±on Tree”  left off. Now that Mike has found that Gusti (aka Vin) is in possession of sarin gas, the agents are trying to devise a course of action. Briggs goes on to describe the side effects of the gas, which are terrifying, and suggests they inform the Bureau, which has to be a first for Paul. However, Mike wants to handle the case himself, since the birds led him to it. He also believes that Gusti is unaware as to what he has in the trunk of his car and deems him the middleman, not a terrorist. Briggs lets Mike stay on the case while the sarin gas sits inside an inconspicuous car.

The next morning, Johnny’s rebound girl, Jennie, is cooking in Graceland’s kitchen, which both surprises and irritates the girls. Paige and Charlie proceed to tell a naked Johnny to get rid of his conquest; however, he proposes to make fruit of the situation, which results in every Gracelander eating at the table together. The scene was cute and light, a rare kind for the show. Additionally, Mike has forgotten that he promised to help Charlie with her case, and since he can’t travel to Florida with her, Jakes volunteers. While that is discussed, Jenny asks everyone what they do for a living. She suspects they are pornographers, surprisingly, no one offers a convincing cover story. Paul tells her that they are undercover agents, which she does not buy.

Moving on, Briggs, who seems to have regained complete trust from Ari, brings Paige to his mission. As it turns out, a shipment Vince was handling and should have been delivered to Ari, was flagged in Brazil. Ari and Brings decide to go to Clear Line shipping to fix the situation with the merchandise, but there is a catch: Toros, following Tevan’s orders, tags along. When they get there, Paige has assumed her undercover persona as the new manager of Clear Line. Ari takes one look at her and believes the two have met, which she deflects. While Ari doesn’t push the issue, Toros flirts with her, and Briggs, who time after time proves how convincing he is when he is under, tells her to take off. Paige, also in character, fights back, and Briggs pulls a bold move: he takes her hand and puts it in a paper cutter, threatening to give her a manicure. Paige plays along; she asks to make a call and promises that she can get the shipment to them. The scene works on several levels and, above all, was entertaining to watch.

Paige calls Brazil’s customs, speaks to her contact in Portuguese (how many languages is this girl fluent in?!), and informs them that the crate will arrive in 12 hours tops. Bragging, she also asks for a 20% commission. Initially, Paige and Briggs’s joint effort seems to be working well; however, Charlie overhears them discussing their mission and asks her former flame what is going on. He retorts that miss DEA is helping him to get Martun Sarkissian, which Charlie clearly disapproves of. She preaches that he shouldn’t take volunteers onto a sinking ship. She is right.

In the meantime, Mike pays a visit to Gusti, the villain with the bubbliest personality that Graceland has given us so far, and while they discuss karma and the afterlife, the LAPD bursts in and takes both men and Gusti’s wife, Madison, in custody. Johnny is the one leading the case.  While Mike, in character, pretends to believe that he is doomed, Gusti is confident that they will be fine. His upbeat attitude while being detained is charming.

Back to Briggs and Paige, the shipment arrives and Toros keeps hitting on Paige when Vince arrives to Clear Line and disapproves of what is going on. He also threatens to go to customs, which prompts Ari to pull a gun and Briggs to go to the dark side. He handles the situation like a brute, first telling a bogus story about his childhood and a bike he never got, and then burning Vince’s face with hot engine oil, which Paige witnesses while trying not to wince. Now that Vince seems to have been taught a lesson that should keep him out of the game, Briggs keeps earning bonus points with Ari, while Paige has secured her place in the plan. Moreover, Toros hands her his business card with his personal info on the back. As Jakes would put it: peachy.

Speaking of Jakes, he decides to look impeccable at the meet in Miami, a costume choice that Charlie complains about, and the swamp guys, Gene and Cash, mock. However, it works. It was refreshing to see how Jakes composes his undercover characters.

Jakes ends up going hunting with Gene and Cash, who take him to the swamp. In between conversation about birds and gators, Jakes keeps asking for a deal and gets an ambiguous reply. Cash tells him that even though he has a connection in Georgia, the stakes are high, and if caught, they would be jailed for life. As that is said, an alligator takes the bait, which causes Cash to hit his face, and Gene to fall into the swamp. When the alligator is about to have a feast with the man, Jakes takes a rifle. He kills the reptile like a boss and secures the deal for Charlie. So far that makes the three parallel missions in the episode going strong.

Back to Mike, he looks a mess while he is detained. He also seems to be turning into Wolverine. In spite of his state, Agent Blue Eyes keeps bonding with Gusti yet gets no new information before he gets pulled out by Johhny. With no intel, Mike asks Johnny to let him go to the bathroom, where he takes oxy. When he goes back to Johnny, the latter informs him that Gusti’s girl is a junkie, which causes Mike to quickly devise a new angle for his plan. He asks Johnny to punch him in the face before he returns to the cell.

Once Mike is put behind bars for the second time, he talks to Madison, whom he works beautifully. She tells him that she cut a deal with Gusti; she married him so he could get his green card in exchange for free board. Romantic. Before Mike is taken from the cell by Johnny, he leaves oxy by her leg.

In the meantime, Briggs and Paige talk shop. Paul tells her that Toros and Ari were arguing about Vince and her, BUT he couldn’t understand the whole conversation. However, he knows that Toros wants to push Ari out of the Clear Line gig, which would mean that Paige would deal with the man a lot more, leasing her to possible danger. Briggs, who apparently processed what Charlie had told him before, proposes to persuade Ari to keep Clear Line. As a preemptive measure, Paige decides to get a translator so they know exactly what is going on.

Back to Mike and Johnny’s joint mission, Gusti is put behind the glass where Mike is being questioned. Johnny tries to persuade Mike to give up Gusti, which he, of course, doesn’t, and the ploy pays off as the peppy criminal believes Mike to be a loyal friend now. Later on, Gusti, his wife, and Mike are let go. Gusti gloats that he was right when he assumed they were just part of a shakedown. However, now that he trusts Mike, he is going to make him part of his endeavor.

At Toros’ house, Briggs acts a little too cocky while trying to convince Ari to keep Clear Line, which causes Toros to get irritated with Paul. He tells Ari, in Armenian, that he will kill Briggs. Since Paige and the translator are listening in, she decides to intervene and runs to the house. Paige pretends to be there for some action with Toros, a distraction that helps Ari and Briggs get out. The problem is that Paige is now alone with Toros, who, in her own words, gets handsy and rough with her. That is not a problem for the DEA agent, who, without breaking character, ends up breaking the man’s nose, masking the act as foreplay gone wrong. The scene is sheer perfection and very reminiscent of the Paige we met on the second episode of the series. I have missed that Paige.

Later on, a worried Briggs checks up on her and is glad and proud that she got rid of Toros. As a side note to that, I have also missed the sibling-like bond that the two have always shared and went sour when Paige betrayed Mike. Also, for the first time this season, I am starting to forgive her.

Back to Mike, he leaves a voice message on Briggs’s phone, making him privy of what Gusti is actually mixed up with. The boy made the deal that Mike had originally tracked with his computer while following the birds, the clock, and the numbers (I am still rolling my eyes at this, though). In exchange for picking up a package (the one with the sarin), he would be paid $50,000. Instructions for the delivery would be given via a phone call to a burner cell. However, Gusti is 100% unaware of what the package contains. As Mike had anticipated, he is not a terrorist.

While Mike seems to be on the right track, he encounters yet another problem. Madison, who seems very fond of him, smokes oxy next to him, then blows smoke into his mouth. He breathes it in, which, naturally, will lead to disaster. As if that wasn’t enough, Charlie summons the Gracelanders for a “who took 20 oxy pills from me” meeting. Paige is quick to reach the most obvious of conclusions: Mike. They all knew about the elephant in the house, and now they must confront it. However, said elephant is now dealing with a mission that involves a lethal gas. It cannot get more dangerous than that.

All in all, “Sidewinder” was a balanced episode that offered a little bit of everything and gave all characters good material. I particularly enjoyed Jakes arc, and I am looking forward to seeing how everything unfolds. Although I still question the fact that the sarin has not been taken or replaced by something else and instead is still posing an imminent threat, I want to believe that there is a bigger picture, one that I can’t wait to be unveiled. 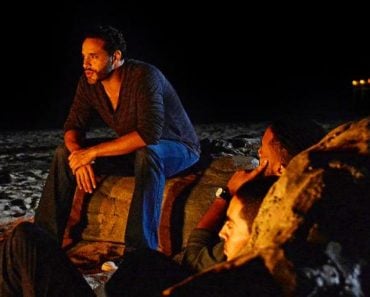 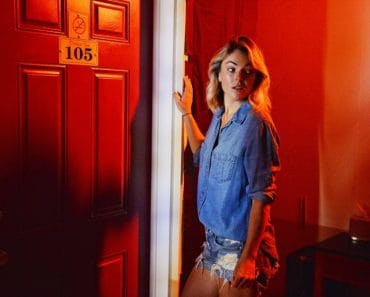 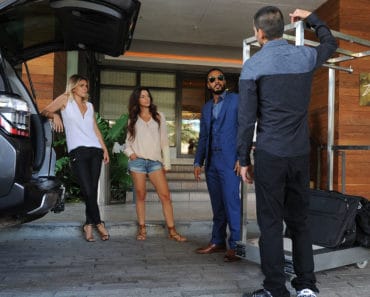 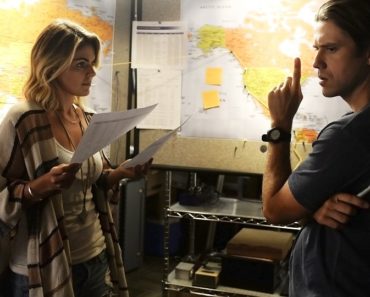 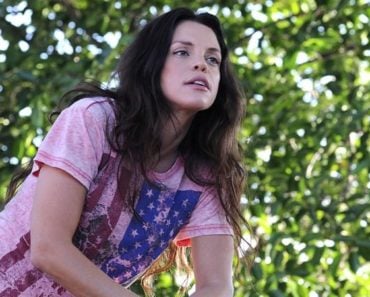 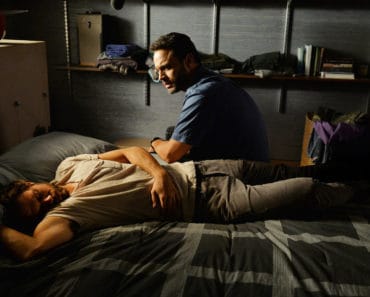