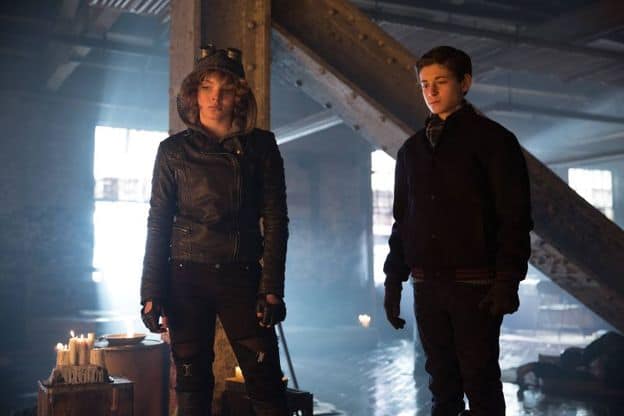 After a long hiatus, FOX’s hit series Gotham has finally returned to wrap up its first season, and last night’s episode, “Beats of Pray,” marked the beginning of the three-episode Ogre storyline, featuring Heroes’ Milo Ventimiglia as the serial killer Jason Lennon a.k.a. the Ogre.

I really enjoyed how they introduced Lennon in this first episode with us only getting him through flashbacks as a setup to when we do meet him next week. It allowed the episode to really explore who he is and why he does the things he does. Despite the fact that he is somewhat psycho (spoiler alert: 100%), you couldn’t help, but feel a little bit sorry for the man. He only wants to be loved and doesn’t want to be alone, but just does it the wrong way. Even though Ventimiglia was playing a killer, you just couldn’t help but feel for the guy. However, I’m looking forward to his next two episodes, when we see him interact with Gordon, Bullock, and possibly a few other characters.

This episode was also a fantastic Fish Mooney episode and that hasn’t been something I have been able to say a lot regarding her in this first year. There are times when Fish just feels unnecessary a character that they just put there, but there are also times like this episode where they showcase her strength as a powerful woman. Even though it felt like it went a little too fast, I enjoyed seeing her putting together a great plan and execute it by taking down Dollmaker and getting out. However, she had to take a serious hit to her gut as she gets shot just before she and the prisoners get away in the helicopter. Even though we know that Jada Pinkett Smith will be leaving this season, I’m not really sure if she might get killed off, despite this first potential hint.

Bruce was  heavily featured in this week’s episode, as he takes Selina’s help in finding Reginald Payne after he stabbed Alfred in the previous episode. I know some viewers out there that think that the show gets distracted with having the young characters around, but they are fitting in quite nicely. As dark as Gotham can be, I enjoy whenever they do focus on Bruce and/or Selina, even though they also go through a lot of dark arcs. There was a lot of great Batman teasing moments, from Bruce using similar integration tactics to him almost pushing Reginald out the window. Luckily, Selina took care of that last part and got that villain off their back.

Gordon was 110% perfect in this episode from start to finish. I like how he is so set on fighting any corruption that stands in his way, and we get a perfect example of that when he confronts Loeb. So not only does he have to deal with Lennon possibly going after Leslie, because Gordon dared to investigate the Ogre case, but also the man that is leading the GCPD. I like those kinds of struggles; I’m sure Gordon doesn’t, though. Overall, this was one of the strongest episodes of Gotham’s first season so far, and with three episodes remaining, these next few weeks are going to be one interesting ride.