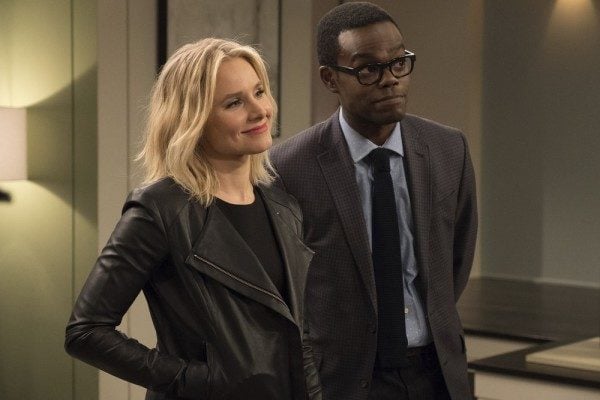 The Good Place is back, y’all. After what seems like ages, the surprise NBC hit has returned for a second season, building off of one of the biggest twists of the 2016-2017 television season. I would advise you to stop reading now if you’re looking to avoid spoilers. But, The Good Place’s first season finale turned the premise of the show on its head by revealing (again, last spoiler warning) that they were all actually in the BAD place, and that Michael was an engineer of torture rather than a designer for the good place. From its hour-long premiere, you’d be hard pressed to figure out exactly what the rest of the season is going to be like, but I’ll get to that later.

Last season was primarily focused on Eleanor and believing that she didn’t belong in the good place, while the other characters developed and subsequently crumbled under the same premise. This episode set the four main characters (Eleanor, Chidi, Tahani, and Jason/Jianyu) as equals, exploring each of their time entering “Phase 2” of Michael’s torture scheme. “Everything is Great” also spent some time exploring Michael’s point of view, and perhaps suggested that Michael could experience some employment turbulence as the season continues.

Of course, we’re not sure exactly how the season will continue because Eleanor quickly figured out, thanks to the note from herself, to find Chidi and that they were in the bad place. So the remainder of the season post-premiere will explore “Phase 3” (or more, I don’t have any more information than you do). But the premiere episode still revisits the created world and reacquaints us with all of the characters from the previous season, including “Fake Eleanor”.

I don’t have much to criticize. I’m so happy to be back in this world and with these characters, and I laughed out loud several times watching the premiere. It did feel like the laughs were a little few and far between, but for those worried that shaking up the premise of the show would ruin it…worry no longer. Ultimately, knowing what Michael is up to, that Jason is an idiot, and more about the “actors” in and around the major players simply enhances the viewing experience. So I could use a few more laughs, but The Good Place is still easily among the best comedies on television, bar none.

I do wonder how they plan to continue going forward, but the creative team behind The Good Place has earned an awfully long leash, and I’m definitely going to give it to them.

Overall, I was deeply impressed with The Good Place‘s second season kick-off. Any show that can keep me guessing and keep me laughing all at the same time is a rarity and should be treasured. I’m really looking forward to what’s next.

What did you guys think of the premiere? Let us know in the comments!

The Good Place returns for its second season by tweaking the old format and giving the characters new obstacles to contend with in “heaven”.