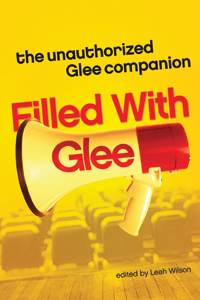 Okay, that is admittedly a corny title for a book about the TV show of the same name. Then again, a lot about Glee the show is also corny. Smart Pop Books has put out a collection of essays based on the Fox hit TV series, Glee (you can also review our reviews of a Dollhouse book and a Vampire Diaries book).

What struck me right from the introduction of this book is the fact that it admits that Glee doesn’t always work. This is not negative feedback – this is what a lot of true fans of the show have been saying for a while. When Glee is good it’s very, very good. But when it’s too much, it falters. The fact that this book acknowledges that fact lends it credibility. In an essay entitled “You’re Having My Baby”, the fake pregnancy storyline is examined and, rightly, derided (though the essay does discuss how the show managed to turn around the tragedy of that particular storyline).

Unlike with the Vampire Diaries and Dollhouse books, one would assume that a collection of essays about a show featuring a glee club wouldn’t have much depth. Unlike a show about vampires or a shady human programming company, Glee isn’t really rich in mythology. What it does have, however, are a multitude of characters that are, at a longer glance, deeper than they appear.

Essays like “Musical Promiscuity” examines the formula of the show and the history. Other essays examine the relationships between the various characters (like the friendship between Finn and Puck). It’s actually kind of surprising to read a book such as this and realize how much deeper a show about show choir actually is. If nothing else, “Filled With Glee” will open your eyes to hidden characteristics of this show. Towards the end of the book is a handy episode guide that breaks down the songs and storylines of each episode.

Overall, this book is a nice surprise for fans of the show that points out the good – and bad – aspects of the show while insightfully discussing characters and storylines.

You can purchase “Filled With Glee” from the publisher. You can also enter our contest to win a free copy of the book.