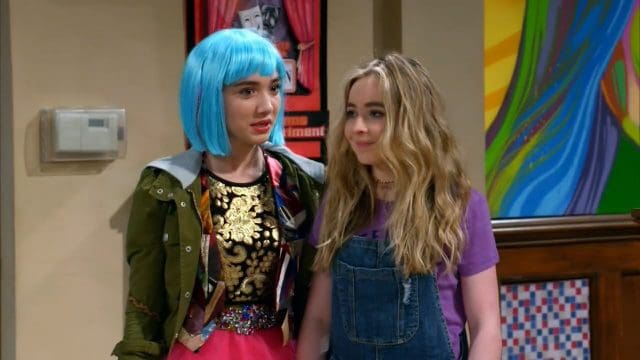 Season 3 of Girl Meets World has so far been preparing to show more mature, age relevant content as the kids navigate their way through high school. Every lesson from here on out will be doubly important, but won’t always be so clear to the kids, or to the audience. Last week Riley and her friends learned some hard truths about high school. They didn’t know everything, they weren’t as prepared as they thought they were, but they would figure it out so long as they stuck together. Something we all learned the easy or the hard way when we first entered the 9th grade was thinking we had all the answers. Now moving on from naive memories, a newly educated Riley is still determined to learn something new everyday in high school. Which means we’ve arrived at the dreaded social media concept. Not that social media hasn’t played a part in several important storylines on GMW already, but this week was a little more focused.

The kids make their online profiles to connect with other students. The obvious choice would be to honestly list all your interests so that others know who you really are. Riley is scared that people won’t like her, so she creates her profile with her own interests but under the alias “Jexica”. Riley gets a pleasant surprise when her online identity is insanely popular. So popular in fact that people pretend to know her, and Lucas expresses interest as well. Riley doesn’t want to let go of everyone liking her so she doesn’t bother taking down the profile. Cory explains that the Internet, while a great tool for readily available information, is more utilized for tedious distractions than for retaining actual knowledge. We can all admit we’re guilty of re-watching “Charlie Bit My Finger”. Anonymity can be used to make Riley feel brave about having people like her, but it can also be used for completely negative purposes. (This is a kid’s show so we won’t go into all that cyber warfare, scary stuff today).

Like Cory said, distractions come and go, eventually to be replaced by something else. Jexica’s popularity falls as quickly as it rises. Pressing the like button and un-liking it is so easy for everyone, especially if it’s not something that has a truly important impression on you. “I’m expected to answer questions about myself”. We decide who we are, what we like, and what makes an impact on us. All of this should be based on what helps us evolve, not just what makes us laugh. Which is why Riley’s friends already know that she is Jexica. They pay attention to who Riley is in reality, and they like her just the way she is.

As young as he is, Auggie also learns a lesson about what is real. He gets an email scam and doesn’t understand that people lie. The storyline gets a little sidetracked with Cory and Topanga’s “1,2,3-Trick” argument because Cory wants Auggie to still have faith in the world. Any lesson learned from that is resolved in Auggie’s dream, so we’re not entirely clear on what the resolution of this lesson was.

Was the tale of Jexica a successful lesson?

Girl Meets World‘s latest lesson is about expressing yourself truthfully.