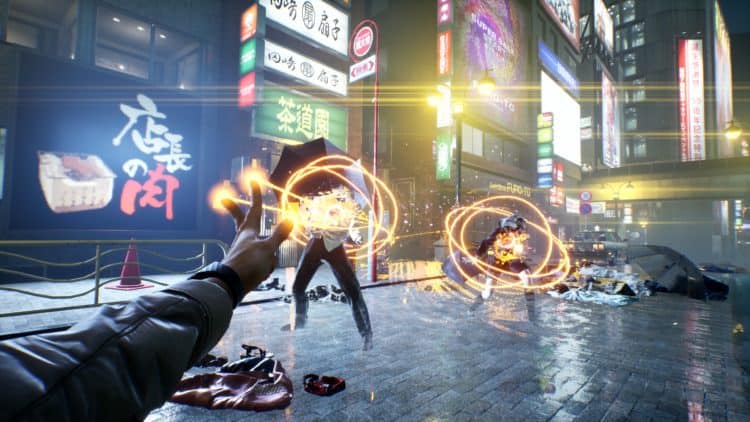 Ghostwire Tokyo is a wild new action-adventure game that is currently in the pipeline for this generation. It is being developed by Tango Gameworks and published by Bethesda Softworks. There have been some short trailers here and there that showcase how this game could possibly play. However, this IP has been shrouded in mystery for some time until recently. It is somewhat similar to games like The Medium or even Fatal Frame. A myriad of spirits, lost souls and ghosts are haunting Tokyo and players take control of a warrior with psychic powers to eliminate them. Of course, martial arts plays a key factor in combat and it is intertwined with the medium that players will be controlling. Fighting spirits works in a special way and it won’t have the same physical impact that players are used to in other fighting games.

The vast majority of Tokyo’s population somehow vanished and interdimensional spirits are invading. They are known as “Visitors.” Nobody knows what they are and where they came from. Meanwhile, a group of thugs that are wearing Hannya masks is running amok throughout Toyko. Now, the player must fight both The Visitors and these gang members and try to unravel the enigma on how they are related. This is the basic premise for Ghostwire Tokyo and there is still much to uncover as development continues. This title is one of those projects that is vaguely on players’ radars and it can easily be missed among all the other new games coming out. Since everything has been backlogged for an additional year, it appears that all the new and AAA games will be released simultaneously, which will be an overwhelming situation.

The gameplay will be from a first-person perspective. Of course, there won’t be any guns to speak of. Instead, there will be kuji-kiri forms of magical abilities at players’ disposal. By looking at the trailer, it is a good indicator of how the game will feel and play. It is almost similar to games of yesteryear like Hexen and the newly created Into The Pit. Players will fight the spirits through a slew of summoning powers and martial art prowess. What happens is that the enemy will be broken down when their health depletes. Once it reaches a certain point, its core will be exposed. This is the cue to use a takedown maneuver to officially destroy it. Since this is essentially an FPS, there will be a copious amount of hand gesture animations that reflect the persona of the protagonist, Akito.

Naturally, there will be a vast array of different spells and attacks to unlock and master. Chances are that only certain attacks will be effective toward advanced enemies. It is difficult to decipher how exactly everything works by watching the footage. The city of Toyko is broken down and oozing with paranormal activity. One would assume that this would be a horror game at first glance. The reality is that it is really not. At its center, Ghostwire Tokyo is an action game that just happens to be taking place in a foreboding environment. The art of this title strays away from the ever-popular gritty and nihilistic interpretation of the world. It is much more fantastical in its approach, brimming with color and personality.

Even though smiting ghostly beings isn’t the most original concept, doing it through martial art magic is something gamers haven’t seen before. With IPs like Ghostbusters, spirits are simply lassoed up and put into a containment unit. With Ghostwire Tokyo, players actually have the ability to smack them around until they pop. This is a very different experience all around. The developers are taking advantage of all the next-gen tech. There will be zero load times and ray tracing will be peppered throughout. The lush colors of Tokyo will be on full HDR display. The dual haptic feedback system will be a primary focus. The developers are utilizing this feature to where players will be able to “feel” a spiritual presence and each spell will have a distinct sense to them. Since the haptic feedback is something fundamentally new, it is good to see developers taking into consideration what they can do with it. It makes the next-gen experience all the more memorable.

Thus, the use of 3D headphones can also be utilized to fully immerse in the game. Ghosts will whisper and give vital audio clues on where they are. This can help pinpoint their location, which can really be beneficial toward Ghostwire Tokyo’s combat. The fighting in this game will operate very much like an FPS. The action will be high-octane and players will need to be on their toes. The various magic spells that can be used are upgradable, giving this game some light RPG elements. It appears that this may be a linear adventure, with multiple pathways to try out. The developers haven’t mentioned whether or not this game will be open-world or semi-open world. Of course, this game is still in development and things can change. However, chances are that this IP will have environments will a clear goal to achieve with exploratory formats. Similar to how Doom Eternal was laid out.

Even though this game has been in development for a couple of years, it is still a mystery to many gamers. At the very least, there is enough information out there to garner some attention. Ghostwire Tokyo seems to be offering a very unique experience that players haven’t seen before. This title is a strange mix of horror, action, and RPG rolled into one adventure. It won’t be long until players get to sink their teeth into this new title. Bethesda was bought by Microsoft in March of 2021. Since Ghostwire Toyko was intended to be a PS5 exclusive, this will still be the case. This game is scheduled to be released sometime in early 2022. This game will be a timed exclusive for PS5 and PC for one year before heading over to Xbox.