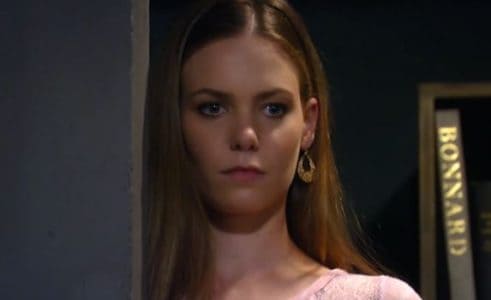 General Hospital fans are just waiting for Nelle to slip up. We are more than certain she’s a liar about this pregnant. There is no way she’s got a baby on board. What a super coincidence she got pregnant a second after she decided she was going to need to get Michael back. She’s a manipulative you know what, and she’s made it clear to everyone she will do anything it takes to get what she wants. Unfortunately for the Corinthos family, she wants Michael.

And she’s messing with the wrong family. If anyone can prove this young woman is out to make a mess of all the lives in this city, it’s Carly. She’s mama bear right now, and she’s not about to allow this young woman to further damage her family with her drama and her incessant need to make everyone miserable. She’s not having it, and she’s going to do whatever it takes to ensure she gets a better life for herself and her family.

And she’s working hard to make that happen. Whatever Nelle has planned, she needs to think twice about it. In fact, the best thing she can do for herself right now is take herself out of this situation and leave town. She’s been “leaving” for months now, but she always finds a reason and a way to stay put and get herself into more trouble with people — especially with Carly. She hates her, and the feeling is absolutely mutual about this feeling.