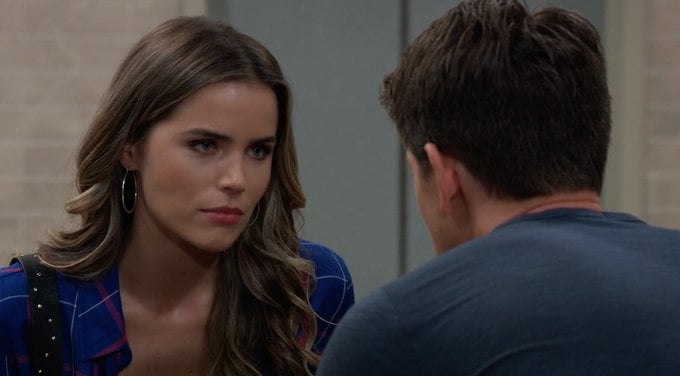 General Hospital fans know that Finn has to outdo himself when it comes to Violet. He didn’t even know about her until just a few months ago, and that was a game changer for both of them. Hayden was pregnant with his baby a few years back, which is something that he knew about in the past. But then she up and left and took the unborn baby with her without a word to him. He looked for her and the baby, but he never found them. Then she shows up, leaves his little girl with him and takes off after nothing for years. Now he and his daughter have to get to know one another in the meantime, and they are both horrified by all that is happening in the world. He’s working so hard to outdo himself at her party, and we have to say that nothing is going well.

He’s working hard on this, and he’s hoping that he can show her he’s a cool dad with a great heart and a lot to offer, but things are not going well. You see, her party is not that enjoyable. It’s a day when there is nothing but a lot of emotion — her mother is not here, after all — and a lot of mischief. She’s not sure that it’s a good party, and he’s not sure how to make it better. Anna is not sure how to be there for both of them as she has already raised her own kids, and she’s already done what she could do. There is a lot going on right now, and that’s all we can say about that. We don’t know what else to do, but we know that we are glad this awkward day is over and we don’t have to see more of this party.

It's Violet's birthday and Finn wants to make sure everything is perfect. Did he plan for every possible scenario?
An all-new #GH starts RIGHT NOW on ABC! #MichaelEaston pic.twitter.com/N0enqAyMbb

He is working hard to make sure he gets it all right.

Robert is a man who has to share some news, and he’s not looking forward to it. What he has to share is not good news. In fact, it might be called somber news. He might have to share a few things that make him feel as if he’d rather do anything else, and we feel that. We get it. It’s not easy to find yourself in a situation in which you have to bring bad news to everyone in your life, but we also don’t know what else to do about it and how else to make it work. He’s sharing, and someone is going to be unhappy about it. On the other side of this is Sonny, who has nothing to deal with but a surprise coming his way. He’s going to deal with this the best way he can, and that’s impressive.

Michael may have just found out that his son did not die when he was born, but he is also afraid to leave his side. He is terrified that if he leaves Wiley’s side, it will happen again. He will lose his son again because there is always a chance that Nelle will come and find a way to take him. He’s doing all he can to make sure this does not happen and that is not a problem, and we cannot wait to see it unfold as things continue in this manner. We don’t know, but we know that there is nothing else going on right now but him feeling as if he cannot leave his son’s side.