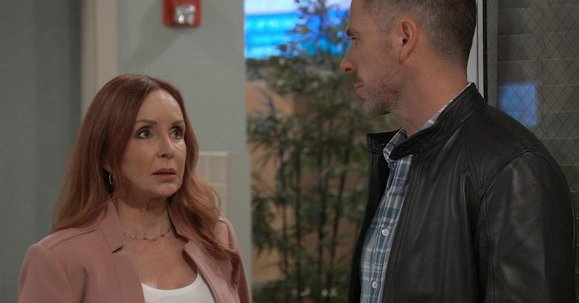 General Hospital fans have a bit of a soft spot for Willow. Her life is so awful, and it makes us all want to pick her up, give her a hug, and tell her it will be all right. It makes us want to be there for her, to make things right for her, and to try and be there when she needs us the most. She’s a woman who has a horrible life. She was raised by a mother who joined the cult life and dragged her into it with her. She then turned on her own daughter, who was pregnant with the leader of the cult’s baby, and she ran. She didn’t want to be part of it. She knew what it was and what would happen if she stuck around and raised her own baby there, and she was not doing it. But she escaped, she ran, she had her baby, she gave it up for adoption to a lovely gay couple named Brad and Lucas, and she hid this from her evil ex.

He found out, he tried to get the baby, she had to go to jail since she would not grant the judge’s orders and tell him where to find the baby, and her own mother worked against her. It’s been a sad year for this young woman, followed by an equally sad life. And she is about to find out that the one good thing in her life, the baby she still loves, actually died right after his birth. That baby was then traded by Nelle as one final act of hatred to Michael. She’s opened up to Sasha and let us in a bit more, and it only breaks our hearts know what will happen to her in the next few weeks as this news comes out.

Well, that was fun! If you didn’t catch our very special, holiday spectacular live – click the link below and watch it from the very beginning: https://t.co/1Ei8uNOrzr Happy Holidays!#GH #GeneralHospital🎄🎅🏻 pic.twitter.com/ggXIh5nrEC

Maxie and Lulu were the very best of friends for so many years, and it was so hard to see them lose their friendship over things that were so not important. But, we don’t know how else to focus on anything other than the fact that that they very much did lose it. They’ve been working hard on trying to get things back to the way that they were considering all that they have both lost in the past few years, and things seem to be getting better. They don’t spend nearly as much time together now as they once did, but they are spending some time catching up before the weekend, and we hear that it might be a nice meeting for them. They might have some real time to spend being happy for one another and with one another, and that does bring us some joy and some peace.

On the flip side, we also know that there is more to this than meets the eye with Jason, who is going to surprise Ned. We don’t know if it’s a good surprise or a bad one, but we do know it’s happening and things might not work out for them if they cannot get it together. They have so much to worry about, to be thankful for, to deal with. It’s all going down this weekend, and we cannot wait to see it. Franco has to do something important, too, and we know that it will end up being something that will only hurt him in the long run. It’s like all the decisions he’s been making as of late, and we do get that.