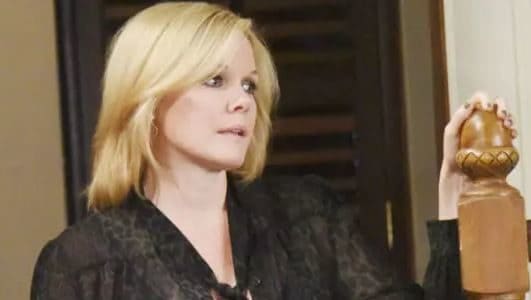 General Hospital fans have seen that Ava is going to get a small piece of her life back. She’s been out of control of so many things for so long now, and we have a chance to see things turn around for her. She’s not going to get her life back on track in an instant, but she is going to reclaim what we believe is a small part of herself that is too much for anyone to handle. We can’t imagine that things are going to go back to normal for her for a long time, but we see how this small bit of control she’s regained is giving her back some of her confidence.

She’s been one of Nelle’s latest victims for doing nothing more than telling the girl she didn’t think her plan was great or her ideas were very good. She didn’t support Nelle when she told her she was going this to Carly and what else she had in mind, so Nelle set her up in a way that makes it difficult for her. And Ava is not happy with it.

Today, however, she’s back in some small portion of control, and she’s not forgetting what just happened. We think that Nelle might want to watch her back. She’s gone too far, messed with too many of the wrong people, and she’s not going to come out of this one on top. She’s got Sonny worried that she did this to herself and he is always a fan of revenge, and she’s upset Ava.

And Ava has the answers to Sonny and Carly’s problems. Do you think she will give Sonny what he needs to know? Do you think that Sonny will even listen to her now that she’s done all she’s done to them? We don’t know, but we do know that Ava is not about to stand back and allow Ava to do this to anyone else anymore. She’s going to take it all to the next level and change the game for herself and for the people that Nelle is ruining.