Again, my apologies. I don’t get around to watching FNL as quickly as I should these days. 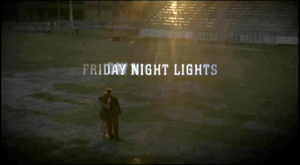 This is obvious and I also tweeted it when I was watching the episode a few days ago, but my goodness Kyle Chandler has been devastatingly great this season. He’s always fantastic and it was nice to see him get that Emmy nomination for season four, but that wasn’t necessarily his strongest work. I think, after eight episodes, season five is. Though Coach had a lot of heavy lifting to do in the early episodes of the fourth season, the middle was about Matt and Julie and then the end was really carried by Tami and a lesser extent, Vince.

But season five has been a great one for both Chandler and Coach Taylor. The season has really dove in to the questions and concerns that arise when trying to build a successful sports program from the depths of nothing. The series doesn’t always hit the sports beats as well as it could because it is more worried about the personal drama, but this season has been particularly strong at letting the issues of control, maturity and teamwork with the structure of a football team power the personal drama.

Coach has made sacrifices this year, and really dating back to last season. He’s sort of looked the other way to his players’unlawful activities before if you think back to season one and the player who beat up on Matt and Landry’s random nerd friend, but for the most part, Coach is a straight shooter. He doesn’t want to cheat, he doesn’t wan his players to break the law and he wants to do things the right way. But son of a , he’s been screwed over by the powerful people in Dillon, those who booted him from the Panthers and stuck him in a seemingly no lose situation just because he stuck with the guy he trusts in Matt Saracen. Coach doesn’t let his emotions show in all instances, but it was apparent that he wanted to just kill West Dillon last year and ever since, he’s kind of reveled in the success of his team. He’s also smart enough to know that a team’s personality dictates the way they play on the field, but this isn’t a team that responds to the kind of structure that a team led by Matt Saracen or Tim Riggins would need. Vince, Tinker and company need to let it loose a bit to really play to the best of their ability.

Earlier in the season, Coach was experiencing the benefits of that kind of coaching. He was getting more recognition than ever, with magazines calling him the Kingmaker and all sorts of buzz surrounding his ability. As he sat outside the hotel a few weeks ago and listened to members of the Lions really come together, not only as teammates but as friends, Coach had a reason to be proud. By letting them be who they wanted to be (to some extent, obviously), the Lions became a real team and a real force.

Unfortunately, by letting them be who they wanted to be also means that the celebration and excessive penalties are just the beginning. Now, Coach is experiencing the consequences of his new style. Vince ego is swelling with each new and possibly fake offer from major programs, the rest of the team is now resenting him for this and while the Lions are undefeated, they’re primed to implode at any moment. This aptly-titled bring us the first major fight between the team’s other stars and Vince and also between coaches Crowley and Riggins. The Lions are reeling and Coach is stuck. Pushing too hard means losing the team and probably its best player. Letting it go means giving up too much of what he really believes in for the chance at glory and yet another middle finger to the people of West Dillon.

I’m not sure where Coach goes from here, but I do know that Kyle Chandler has been stellar in capturing Coach’s frustration, inner strife and confusion with this whole situation. Until this episode, most of Coach’s thoughts and problems with this team weren’t expressed outwardly, but instead written all over Chandler’s face. He saw this coming and tried to ride it out for as long as he could, but there’s no going back now.

Moreover, what’s really interesting about this team, these players and some of the East Dillon students in general is how they do mirror a lot of the older fan favorite characters from West Dillon. You’d expect that to be a bad thing, but Jason Katims and his team have used those similarities to the series’advantage. As Myles McNutt pointed out on Twitter, they’re kind of counterfactuals. Similar types, slightly altered circumstances and thus slightly altered results.

This Lions team is a lot like the Dillon Panthers of 2007-08 (season two) with Vince and Luke filling the Smash and Saracen roles. There’s a lot of hype behind the team, just as there was for the defending champ Panthers. In that case, the new coach didn’t let the team’s personality shine through, punishing Riggins too much and pushing Matt’s inherent leadership to the side in hopes that Smash’s inherent skills would be enough. That tension led to Smash and Matt getting into it on a regular basis and the team combusted before the former was hurt in the playoffs.

Here, Coach tried to avoid that tension by letting Vince do his thing, but also making sure Luke had things to do, whether it’s on defense or through the wildcat offense. He saw the mistakes made with Saracen and Smash and did his best to fix it, but there’s only so much he could do. And because Vince’s story this season is basically Smash’s story from seasons one and two without the helpful and educated mother figure, the parallels continue. Smash’s mother had his best interest at heart, but was willing to push him on the differences between right and wrong in hopes of doing right by her son. Vince’s father, though well-intentioned, doesn’t seem to have the same kind of perspective and is thus filling his son’s head with a lot of big ideas without a lot of morality or consequences found within.

Meanwhile, Luke is something of a shadow for Matt. He’s a worker, but with more talent and thus more pride. Moreover, he’s been given a different kind of support (sort of like the difference between Smash’s mom and Vince’s dad). Being yelled at to bench press a fender by Billy Riggins is slightly different from a motivational pep talk delivered by Coach Taylor and when combing those circumstances with Luke’s increased talent level, he’s obviously going to have a bigger problem with Vince than Matt ever had with Smash. Matt Saracen is just a generally great dude and he can’t hate anyone, damnit.

Now, Coach Taylor has to decide who he wants to be to solve the Lions’issues. Does he be Coach Taylor, the authoritative and supportive man behind the Panthers’title runs in 2006-2007 and 2008-2009, or does he continue to be the looser Coach Taylor of 2010?