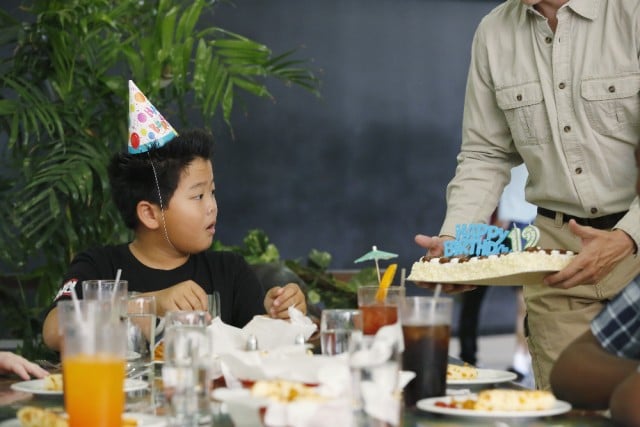 Eddie’s consistent maturation through the first two seasons of Fresh Off the Boat offers the show a constant source of untapped potential, and not just in comedic terms, which “The 1-2” certainly excels in. This week’s terrific episode of Fresh reveals the other awesome benefit to having such a well-developed family dynamic: the series can tell stories about maturity with real emotional stakes, examining the state of the parent/child relationship with the informed histories of who these people are. With a deftly crafted opening scene, “The 1-2” is firing on all cylinders from the word go, a particularly versatile episode of television’s best family sitcom.

Opening with a VHS recording of Eddie’s 11th birthday party, “The 1-2” immediately establishes the conflict at the center of his next birthday with a fantastic cold open featuring a beleaguered pinata and a very camera-friendly Grandma. A year later, he’s decided to have a party – or more specifically, he’s decided to abandon the scallion pancakes and birthday noodles of his parents party for a day out with his friends at the mall, something he lies to Louis and Jessica about. Compounding this decision is Eddie’s frustration with his parents’ strict rules around the house, which he says never “allow him to relax”; so for his twelfth birthday, he decides to live vicariously through his friend Dave for a day, to disastrous results.

The arc of “The 1-2” is pretty predictable: we all know Eddie is going to come around on the strict brand of parenting Louis and Jessica subscribe to, just as we know Eddie’s going to have “birthday noodles” at some point during its 22-minute running time. Where the episode surprises is where it finds nuance within these stories. Eddie’s desire to feel more independent and Jessica’s need to protect and guide her oldest son (who she would clearly do anything for, as the episode openly professes) congeal nicely in the installment’s A-story, giving voice to both generations of the Huang family, and just how difficult and awkward transitional periods (aka “the teenage years”) in parent/child relationships can be.

Jessica wants to give Eddie his freedom, but she literally doesn’t know how; after agreeing with Louis to let Eddie go on a sleepover, she runs over to Honey’s house to watch him hang out with Dave and his mother through the living room window. What she sees is horrifying: Eddie’s having fun, drinking gallons of soda and eating cereal for dinner. And he is having a great time, until he realizes why Dave’s mother treats her son with such loose reins: she has no other way of connecting with her child, unable to understand his needs or communicate the importance of her authoritative guidance (even over something as simple as bedtime). “The 1-2” doesn’t really try to explain why this relationship dynamic exists as it does (though the lonely Whitney Houston dance sessions at night certainly help), but it certainly uses it to make Eddie realize that the bond between him and his parents – specifically his mother – is everything to him, the only thing that keeps him from regressing into a sloppy excuse of a fart machine if left to his own devices.

That simple truth powers the morality at the heart of “The 1-2.” Portraying a ‘hard’ parent as anything but an a**hole is a difficult thing to do, particularly in comedy, where it’s easy to turn someone into a loveless curmudgeon. “The 1-2” doesn’t have that problem thanks to Jessica Huang’s magnificently developed character, and knows it: ultimately, that makes Eddie’s return home in the middle of the night an abundantly rewarding moment, even if it’s one we could all see telegraphed a mile away. The personalities of both characters are so fine-tuned in this episode, their subtle resolution feels like something much grander and meaningful; the image of them all eating birthday noodles around the table is a precious one, and it’s a visual that anchors the journeys of both parent and child in this week’s Fresh Off the Boat.

And that’s not even including the hilarious subplots of the episode; whether Evan and Emery’s attempts to get grounded, or Louis’s incredulation over Eddie’s friendship with Mitch, there isn’t a moment of “The 1-2” that doesn’t feel layered with personality, humor, and pathos, right down to the smallest moments, like Marvin arriving home drunk, just in time to find out that his brother died (an undeniably dark moment, but Fresh Off the Boat somehow makes it hilariously ironic). That care in filling each moment of Fresh Off the Boat with something meaningful sometimes makes the show feel a little too busy. However, that’s not the case in “The 1-2,” as fine-tuned an episode as Fresh has delivered this season.