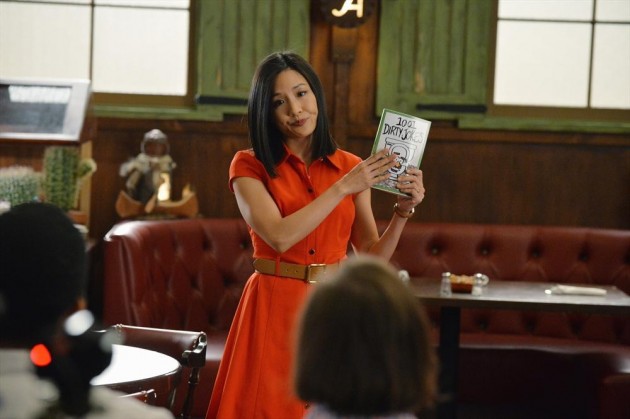 With much sharper characterizations, “Persistent Romeo” easily stands head and shoulders above the episodes of Fresh Off the Boat preceding it. It also helps that “Romeo” taps into something essential about growing up that’s always a fertile ground for comedy: the wonderful ability children have to misinterpret everything, imitating what they see and hear in attempts to approach some semblance of ‘maturity’ and look cool and/or attractive. Propelled by that central plot line, it’s easy for the rest of “Persistent Romeo” to fill in the spaces in between, delivering its funniest episode so far, and providing some much-needed texture to the father/son relationship at the show’s core.

Even the 90’s references in “Persistent Romeo” are more on point; Jessica’s increasing paranoia over nightly news reports (which were becoming increasingly ridiculous in the post-O.J. trial era) sets the tone for the episode to follow, pushing Louis to have sexual harassment classes at his restaurant – and leading to young Eddie discovering the sexual harassment training video, where the episode really kicks off. See, Eddie’s just trying to hang out with some kids at school, and can’t come up with a way to sound cooler than Brock with his Sports Illustrated swimsuit issue sleepover. So what does he do? What most kids do: he makes something up and doesn’t think of the consequences to follow, even after Brock catches him trying to steal a dirty movie from the local video store (which itself, has become a reference to a forgotten era).

Again, Eddie finds himself caught in a lie, so he shows his friends the sexual harassment tape, and they all assume that’s what a dirty movie actually is. The innocence of this plot alone sells it; in their attempts to sound cool and mature, these kids are just imitating what they see in the video, with absolutely no context whatsoever for what they’re saying actually means (“How about one for the road?” “What road?” “Uh…..”). As children often do, their misappropriations are attempts to fit in; and it makes for the most hilarious Eddie story yet, paving the way for a terrific scene outside his neighbor’s house (which tones down the misogyny of Eddie in previous episodes by playing “I Need Love” in the background, while he asks her to film a dirty movie doing “homework, or maybe washing this car”).

This story brings to light something Fresh Off the Boat hasn’t explored too deeply yet: the generational bond between father and son, something “Persistent Romeo” taps into when Louis goes into Eddie’s room to have the talk. Again, “Persistent” takes a universal experience – “The Talk” – and gives it both temporal context (the textbooks the kids are given are hilariously on point, that early 90’s attitude of “just sweep it under the rug and we won’t have to worry about it!”), and adds an important relationship dynamic to the show. Given that we know the real life Eddie Huang would own restaurants just like his father (fun, completely random fact: Eddie Huang once opened a restaurant in NY that served Four Loko), I’ve been waiting for Fresh Off the Boat to begin exploring this relationship, and “Persisntent Romeo” does so in a surprisingly poignant way when Louis rejects the school’s textbooks, avoids the common comedic trope of a father avoiding the situation, and gives the audience a refreshing change of pace when Louis is actually calm and honest when he has the talk with Eddie.

To counter that, Jessica goes off the wall in the episode – and yet, her increasing paranoia about date rape and babies getting kidnapped from backseats in parking lots is oddly charming. If we’ve seen anything from Jessica so far, it’s her steadfast dedication to what she believes in: her husband’s restaurant, making friends with people she actually likes, and the education of her sons. However, she hasn’t had a whole lot to do except support the boys in their adventures, and “Persistent” addresses that directly, showing that a busy mind left at home during the Era of Nightly News could be a horrible thing. Just the visual gag of Jessica changing into a “No Means No” shirt alone sells the ridiculousness (and endearingly, the dedication) of her inability to compromise – and ultimately, makes the point that she needs something to do (which Louis agrees with, handing her a newspaper turned to the classified section, complete with circled “opportunities”).

The only off-key part of “Persistent Romeo” is how often Louis belittles his wife around other people: if there’s one thing left unexplored in this episode, it’s how passive-aggressive Louis’s behavior is around her. It makes for disconnect between father and husband in “Persistent Romeo” – save for the moments when Louis isn’t complaining to the principal or co-workers, and instead is actively working to try and rein in his wife’s passionate approach to every single interaction in life. Their conversation with the principal is slightly unpleasant; and while it’s mostly redeemed by the interrogation scene later on (where Jessica refuses to apologize, or return the bunny she is sewing to Evan, lost in a poker game with Grandma), there are still moments that leave an uncomfortable taste in the mouth.

Maybe Fresh Off the Boat is planning to address this in the future, and that’s why there’s no recognizance of it here; however, it’s the few moments where “Persistent Romeo” isn’t operating on full cylinders. The rest of the episode is so in sync, it makes those moments stand out even more than they might have previously – fortunately, the rest of  “Romeo” is not just the funniest episode of Fresh Off the Boat yet, but the first that feels like it has true command of who these characters are, a promising sign for a comedy still wet behind the ears. 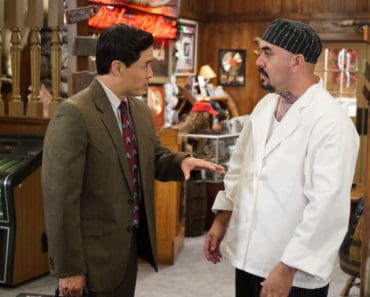