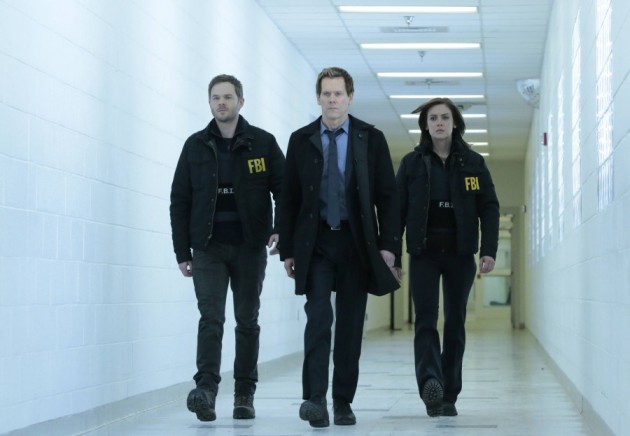 Just when I think The Following could not be any more gripping, they go and have an episode like this. This episode explored the Ryan and Joe relationship like the show never has before. It was one of the most tense, electrifying hours that The Following has put forth in the series so far. Man, am I glad I watched it.

This week on The Following: As the day of his execution arrives, Joe works extremely hard to make sure that his dying request is honored, so he takes control of his situation. Ryan must attend to the situation at Joe’s prison, but he makes sure to bring Max and Mike along for backup.  Theo locates his sister, Penny, to help him escape from the FBI and the limelight.

I’m absolutely floored by the tense dramatic episode I’ve seen. I mean, wow. It was obvious in previous episodes of this season that Ryan was still dealing with some demons, but to see them come to fruition in such a powerful way was scary. To think that one person could have such a powerful effect on you. When we started this episode, Ryan was in decent (fort this show) mental and physical health. When this episode ended, he was headed down a powerfully destructive road. I’m so pleased with the way this season has been handled, as it has become much more about the characters, like Ryan and Joe, rather than the minds of serial killers as a generalized topic.

SPOILER ALERT: Joe Carroll is DEAD. I’m altogether skeptical of this move, but I think that it shows that the creative team is serious about their new approach. If he had to die (which let’s be honest, I’ll miss the crap out of him), I agree with the way it was handled. Though, they say those we love are never really gone, so it sounds like there will be more Joe in the show’s, and Ryan’s, future. I’m certainly excited to see anything involving Joe because, for one, James Purefoy is absolutely brilliant. The character he’s brought to life on this show for the better part of three seasons is one of the most complex, fascinating characters on television today. The other reason I hope to see more Joe (even in hallucinations) is because the chemistry between Purefoy and Kevin Bacon is just so electric. They play mortal enemies who are slowly becoming friends (or perhaps now imaginary friends), but the two should star together in films because I absolutely cannot look away from what they’re doing. Both have done a masterful job on this show, and particularly in this episode.

As I said previously, I remain skeptical of killing Joe, but there are a lot of positives. Theo is an excellent new villain. Mark Gray is still out there. Joe still exists in Ryan’s subconscious. I worry that the show is entirely killing off its roots, but I suppose that it isn’t, really. Sure, I’m a skeptic, but I am also very open-minded and could easily become a believer. I’m already a “follower,” after all. (I know…my jokes are bad.)

Ultimately, this was a fascinating, superbly written dramatic episode. I could feel Ryan’s pain, I was riveted throughout, and I rooted against Joe dying. That’s how that’s supposed to go, right? Anyway, as skeptical as I am about Joe’s death, the rest of Season 3’s pure quality has earned The Following the benefit of the doubt. There is plenty of story left to be told, and remember: Joe’s immortal. I will miss him among the living, but there’s inevitably some cool dead stuff coming up. Rest in peace, briefly, Joe.

What did you guys think of this week’s episode? Are you shocked and dismayed by Joe’s death? Let us know!

The Following airs Mondays at 9/8c on FOX.