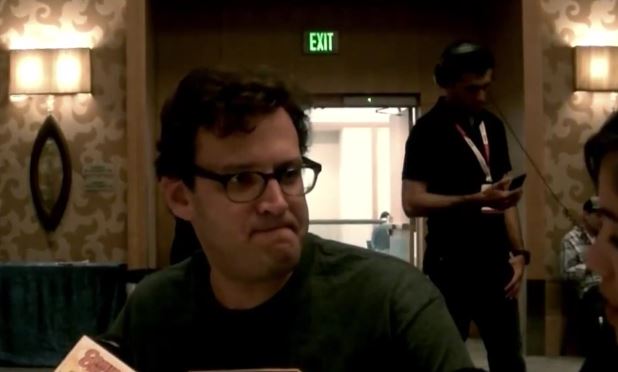 TVOvermind was fortunate enough to participate in The Flash Press Room at San Diego Comic-Con with other news outlets at roundtables, where stars and producers  from the show discussed what is coming up in Season 2. Andrew Krieisberg, one of the excellent showrunners and creators of not just The Flash, but also The CW’s Arrow, Legends of Tomorrow, and CBS’ Supergirl, was one of the people we got to talk to, and you can watch his entire roundtable interview below. Here are some of the highlights:

When asked about what consequences the singularity will have on the heroes: “The events of the finale are going to reverberate throughout season 2. Obviously it’s going to be solved, the world isn’t going to end, but how they solve it, I think is going to be a very big surprise. The effects of them having done what they did in the finale about trusting Wells and Barry traveling through time, opening the singularity, there are obviously consequences to that. They messed up, they messed up really big! They aren’t fully going to get away with, certainly not going to get away with it emotionally and them dealing with the consequences and what they did, make up a lot of emotional storylines for the early part of the season.”

Whether the glimpses Barry saw while being in the Speed Force in the finale will happen this year: “There are a couple of things that you saw that will happen sooner rather than later and a couple of things that are sort of just wishes. One of the great things about The Flash is that he has such iconic storylines so that you can tease the museum, you can tease The Trial of The Flash and [non-comic] fans will go, ‘Why is Barry in a prison cell?’ while [comic fans] will go, ‘Oh crap, that’s The Trial of The Flash!’ I think you saw over the course of Season 1 that we obviously borrowed heavily from Rebirth [by DC Comics CCO’ & The Flash executive producer Geoff Johns,] and there are other iconic storylines that we are just as eager to tap into.”

Whether the effect of the singularity will be noticed across all the CW DC shows like Arrow and DC’s Legends of Tomorrow: “It will be referred, certainly, on the other shows. The ramifications of it will play out certainly on Arrow, but you will have to sort of watch out how that happens.”