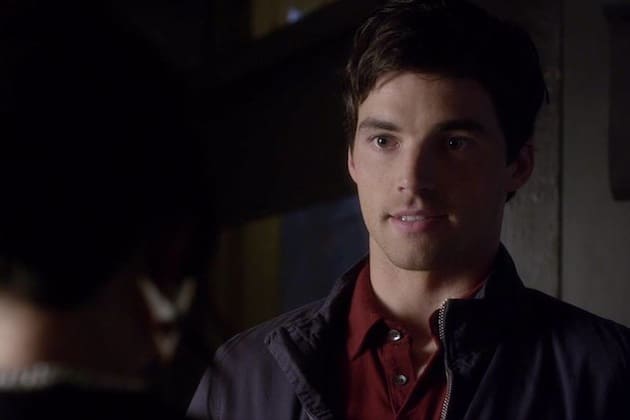 Some individuals make it big with a great deal of hard work, struggle, and sacrifice. Others, while they may be hard working, are lucky enough to be born with an intangible quality that makes them almost irresistible. These charismatic and talented individuals seem destined for stardom. One such individual is the highly popular Ian Harding, known best for his portrayal of Ezra Fitz on Pretty Little Liars.

Harding is extremely popular for his work on the show, which is currently in its final season. However, fans can look forward to seeing much more of Harding in coming years, as he recently landed a starring role in Thin Ice and will appear in Office Uprising. Given his widespread popularity, it is surprising to realize how many people know him only as a pretty face. In reality, he is incredibly hard working and kind. Here are five of the most interesting facts about the talented Ian Harding.

5. He is close friends with a Pretty Little Liars co-star

Harding is not only a hit with fans; he has formed strong bonds with some of his co-stars on Pretty Little Liars. Most notably, he is very close with Lucy Hale. Hale portrays Aria Montgomery, Harding’s on-screen love interest.

The two have been open about their close friendship. They often confide in each other about their love lives and are known to joke around on set. Clearly, their bond in real life allows them to bring a genuine connection to the show.

Pretty Little Liars debuted in 2010 and quickly became one of television’s most popular dramas. As such, it should be no surprise that one of the stars of the show has earned a considerable income over the years. In 2017, his net worth is estimated to be around $3 million. As he is set to star in two upcoming movies, his personal wealth will almost certainly continue to rise.

3. He has extensive training

While Harding appears to have been born with everything it takes to be a star, he has also worked hard to hone his skills. Most notably, this included completing post-secondary education. He graduated from Carnegie Mellon University in 2009 with a BFA in acting. Clearly, he is not one to rely on his natural talents. In fact, it took him less than six months to land the part of Ezra Fitz after graduating from university.

2. His peers recognized his potential

Sometimes, an individual’s talent and potential are apparent to everyone but themselves. This appeared to be the case with Harding, as he was surprised when he found out his peers elected him to give the address at his high school graduation. While it may be no surprise to fans who know him as a Hollywood star, Harding has expressed his surprise that his classmates saw him as a leader.

1. He has worked hard to help others

It would be very easy for a young star to get wrapped up in a life of luxury and excitement. However, far from partying away his time, Harding is a dedicated worker for the Lupus Foundation of America.

Harding’s mother has lupus and it has affected her life for the last 20 years. In a heartwarming show of support, he has used his fame to increase awareness of the issue and raise money for research.

Many people might assume that Harding, the talented and handsome star of Pretty Little Liars, would be somewhat vain given his success. However, this could not be further from the truth. In addition to working tirelessly on his craft, he has also used his celebrity to help those suffering from lupus. This is one Hollywood star who has earned every bit of his success and is making the most out of the considerable natural talent he possesses.