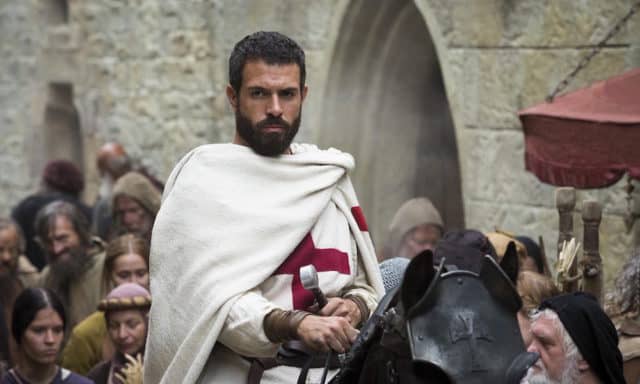 Knightfall is a new historical drama that has started up on History. Given its name, it is perhaps unsurprising that it is centered around the fall of the Knights Templar, though it seems to be at least as much fiction as fact.

Here are five things that you may or may not have known about Knightfall:

It Is Centered Around the Knights Templar

The Knights Templar was a monastic order founded for the purpose of protecting Christian pilgrims in the Holy Land. It was a popular choice for charitable purposes, which made it so wealthy that it became involved in Christian finance. When Christians lost control of the Holy Land, support for the Knights Templar faded, which combined with their secrecy to make them a target by other powers.

It Is Set At Around the Time of Their Dissolution

Knightfall is set in the reign of Philip IV of France, who was the one who brought about the dissolution of the Knights Templar by acting against them, which may or may not have been connected to his financial debts to the monastic order. Philip IV is one of the more interesting medieval French monarchs, having been described by one of his enemies as more a statue than either a man or a beast. Regardless, for those who are interested in learning more about him as well as his children, there is an excellent series of historical novels called The Accursed Kings.

It Is Concerned with the Holy Grail

Given that it is on History, it is perhaps unsurprising that Knightfall is concerned with the Holy Grail, which is often associated with the Knights Templar in modern fiction. This is because the dramatic fall of the monastic order resulted in a great deal of feverish speculation about them, which has not been helped by the fact that the Freemasons incorporated the rituals and symbols of multiple monastic orders, thus resulting in theories about connections between the two organizations.

There Was a Serious Issue During Production

It is interesting to note that the production of Knightfall ran into a serious issue during production. What happened was that a fire consumed most of the exterior sets for the series, which resulted in an estimated loss of $4.5 million. The loss of the exterior sets set back the production, but in spite of the loss, the people behind Knightfall chose to continue filming in the same place.

There Are Plans for Books and Comic Books

There are already plans in place to turn Knightfall into something more than just a TV show. For proof, look no further than the fact that A+E Networks teamed up with Titan Publishing to create original novels as well as a comic book series in eight parts, which are meant to expand the setting as well as tell crossover stories. The first of the novels and comic books are supposed to come out at around the same time as the start of the TV show, but it remains to be seen how many more will be made, which is bound to be affected by the performance of the TV show.