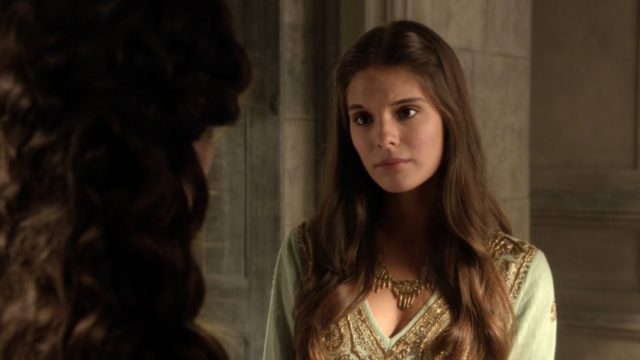 Caitlin Stasey portrayed Lady Kenna from 2013 until 2015. The Australian beauty from Melbourne, Victoria was chosen for her role as one of the four ladies-in-waiting for Mary, Queen of Scots because a show producer, Meredith Markworth-Pollack saw her photo and thought Caitlin was perfect. Caitlin closely matched the pilot description of a girl who is bohemian, relaxed and earthy. Caitlin richly fulfilled the role of Kenna.

The saga of the sexual, sassy, strong and willful Kenna begins when the ladies-in-waiting, by royal custom, observe, for the first time, royals consummating their wedding night. The girls leave, and Kenna subsequently meets King Henry under very compromising circumstances:

King Henry continues to command Kenna’s attraction. He asks Robert the Viscount of Lorraine if he will take Lady Kenna as his bride should it be ordered. King Henry reminds Robert that it would be a union blessed by the King. Robert agrees that he would follow his King’s command, and the King dismisses him. The King tells Kenna that she needn’t worry because being the King’s mistress will expand her opportunities. He continues to entice her, yet waits for her to be ready to become his mistress.

Kenna goes to the King’s chambers. He has asked her to become his second mistress and stay with him regardless of the fat that he already is married to the Queen and has had the same mistress, Diana, for decades. Kenna decides to fully accept her part in their illicit affair.

As the complex story lines unfold, Kenna becomes embroiled in the world of royalty. In seeking a place of security, she enjoys trinkets and excitement. She also quickly learns that she may never have the security she wants, yet, she demonstrates her confidence:

After promising Kenna that he will get rid of Diana by settling lodgings for her in Paris, King Henry returns from Paris with Diana. Kenna confronts the King. His solution to pacify Kenna is to move Diana into a cottage on the palace grounds. When Kenna demands to know why, he counters that it is because Diana is the mother of his child, Sebastian (Bash). He placates Kenna telling her that he is with her now, not Diana.

Kenna boldly invites the other ladies-in-waiting to the King’s quarters and announces that she is his official mistress now. She states that his quarters are also hers. They question her about how quickly it happened. Kenna tells them it’s now her turn. The ladies notice that the floor tiles have the letter D, for Diana.

Kenna demands that the tiles in the King’s chambers be removed from the floor. He refuses, offering to cover them with tapestries. Kenna also refuses, countering that Diana probably chose them and most likely decorated the interior herself.

Later that evening, King Henry tells Kenna to watch the evening’s fireworks without him. Kenna think’s he’s with Diana, but discovers her name in fireworks below the castle walls. They embrace joyfully afterwards.

Kenna navigates through dangerous moments when the King leaves and Italian Count Vincent takes over the castle. Count Vincent wants a ransom for his dead son, who died of dysentery after being detained in France. Queen Catherine must pay a ransom price. Kenna is accosted by the Italian guards, who call her the King’s whore. Mary saves her by taking her upstairs. Kenna stands up to the Queen when she insists on keeping to a dangerous escape plan.

As Kenna recovers from the sinister Italian attack, she discusses her plight with the King. He refuses to let Diana go. He also warns Kenna that if she asks him again to choose between her and Diana, he will choose Diana. Kenna feels devastated and ruined, but tells him.

Kenna barges into the Queen’s quarters, demanding to know why Diana is allowed to remain at the castle. Kenna divulges secret information about a Catholic priest telling her that Diana is trying to have the church accept Bash as a rightful heir of King Henry. Kenna and the Queen share information and conspire together to get rid of Diana by accusing her of treason.

Kenna remains bold. At one point, she guards the queen’s prison door. The Queen tries to undermine her confidence but Kenna is impervious to Queen Catherine’s words.

Kenna and Bash are Married, and Life Becomes More Complicated

The King forces Kenna and Bash to marry:

King Henry gives Bash a ridiculous title and Kenna and Bash have an argument. She tells him that all she cares about is herself. She also confronts Bash about his only caring for Mary, who has married. Bash says that they must carry on with their roles because they were married before God, King and country.

She continues as King Henry’s mistress as he begins to go mad. Kenna tells Bash that she is terrified of the King and that his touch makes her ill. She tells Bash that their marriage “is based on nothing”. Bash snaps at her “What a pair my father tied together for a lifetime.” King Henry goes to Kenna telling her that he gets headaches and Kenna’s touch is soothing to him. Bash breaks up the moment; telling his father that new Queen Penelope is getting jealous. Henry tells Bash “It’s a burden sometimes.” Bash tells Kenna she is not safe in the castle, but he will always defend her.

Kenna Comforts Pascal as He Dies

Though many of Kenna’s relationships in the series have focused on her sexuality, when the Black Plague overtakes the region, her personal strength must carry her through difficult times. She watches over Pascal, who has been stricken down by the Plague. She tells him that he is and always was loved. This tender moment is one which shares the depth of her personal character.

Kenna meets Princess Claude, Bash’s half-sister. Bash and Claude have dallied in the past, and Claude is very perceptive about Kenna’s personality and place in the scheme of many things. Claude confronts Kenna by announcing that Bash and Claude were lovers when young, after Kenna tries to help her overcome an illness which Kenna attributes to the queen’s poisoning of her own daughter.

Kenna makes her last appearances in Season 2. She has been manipulative, bedding not only King Henry, but his bastard son Bash, and has had a notable affair with General Renaude which results in her becoming pregnant. She tries to keep the pregnancy news away from Bash. But, Delphine tells Bash. In a rage, Bash confronts Kenna and asks her how long she has been carrying Renaude’s child. Kenna begs Bash to maintain their marriage, so that she will not give birth to a bastard child alone. She begs him to remember his own bastard condition and to have mercy on the life of her and her unborn child.

(Kenna is seen in one of the saddest moments)

Mary finds a home in Sweden for Lady Kenna, where she can have her child and give it away to a caring couple. Kenna says her goodbyes to the ladies-in-waiting, as her carriage arrives to take her away. As she awaits to board a vessel, Kenna meets a young king from a kingdom near Russia. She offers to come and visit him in the winter. Kenna boldly mentions that she might bring her ward, a young baby, along. The naive young king agrees. Kenna also mentions that their long voyage will give them plenty of opportunity to become acquainted as they journey far across the sea.

Lady Kenna de Poitiers took on many experiences. She was one of the best friends and servants of Mary Stuart. She was officially King Henry’s second mistress. She was Bash’s wife, Pascal’s guardian, and bore General Renaude’s bastard child. Kenna had many seductions, loves and betrayals. Most descriptive of her character is her statement that all women are fallen, with lives ruined by circumstances. So, said she, “to hell” with what anyone thinks.