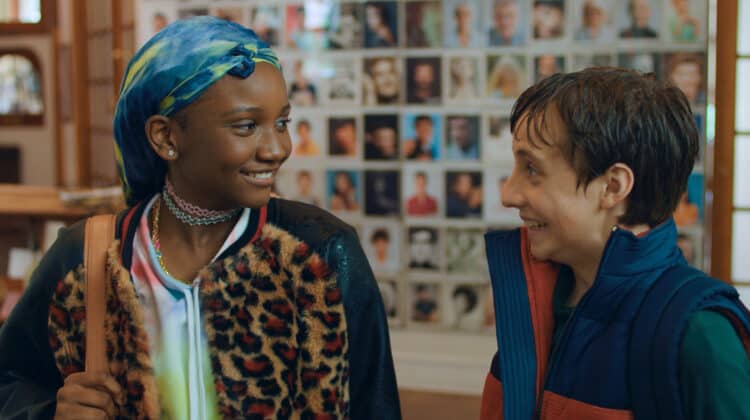 The musical family-comedy film Better Nate Than Ever was released as a Disney+ original film on April 1. The coming of age film was written and directed by Tim Federle, who served as the writer and executive producer of the Disney+ series High School Musical: The Musical: The Series. The film is based on his novel of the same name and stars Rueby Wood in his first film role, Lisa Kudrow, Aria Brooks, and Joshua Bassetts. It centers on the story of thirteen-year-old Nate who aspires to be a Broadway star. When his parents leave home for the weekend and he finds out that there’s an audition in New York for Lilo and Stitch: The Musical, he grabs the opportunity and travels to New York with his best friend. It received generally positive reviews from critics. In a review published by the New York Times, they mentioned how while author and screenwriter Tim Federle still has a lot to improve as a filmmaker, the cast breathed life into the film: “As a filmmaker, he doesn’t yet have the comic timing to prod a laugh from a montage of rats and garbage. But his leads deliver hearty performances that elevate the movie, particularly once we’ve had time to adjust to the gusto of Wood, whose wired performance has the flavor of Hugh Jackman’s exuberance squeezed into an espresso cup.” If you enjoyed Better Nate than Ever as much as we did and you’re looking for the next musical film to watch, here are five of our movie recommendations.

Just like Nate who wishes to be a Broadway star, the protagonist of the 2007 musical romantic comedy film Hairspray aspires to be a star in a local television dance show. The film is based on the 2002 Broadway musical of the same name, which was based on John Waters’s 1988 comedy film of the same name. For the film’s stage musical, screenwriter Leslie Dixon adapted both Waters’ 1988 script and Thomas Meehan and Mark O’Donnell’s book and the film was directed and choreographed by Adam Shankman. It stars John Travolta, Michelle Pfeiffer, Christopher Walken, Amanda Bynes, James Marsden, Queen Latifah, Brittany Snow, Zac Efron, Elijah Kelley, Allison Janney, and Nikki Blonsky in her feature film debut. The film is set in 1962 Baltimore, Maryland, and centers on teenager Tracy Turnblad who aspires to be part of a local television dance show “The Corny Collins Show”. When she lands a spot on the show, she becomes popular and yearns to bring diversity and integration to the show. The film received positive reviews from critics and received several awards including an Academy Award for Best Young Actress (Nikki Blonsky) and Best Acting Ensemble and several nominations including Best Comedy Movie and Best Family Film at the Academy Awards, Best Motion Picture – Musical or Comedy, Best Actress in a Motion Picture – Musical or Comedy (Nikki Blonsky), Best Supporting Actor – Motion Picture (John Travolta) at the Golden Globes, and Outstanding Performance by a Cast in a Motion Picture at the Screen Actors Guild Awards. In a review published by New York Times, they praised the film’s overall entertainment value and its salient theme of inclusivity saying, “There are, to be sure, less thrilling moments, and stretches in which the pacing falters. But the overall mood of “Hairspray” is so joyful, so full of unforced enthusiasm, that only the most ferocious cynic could resist it. It imagines a world where no one is an outsider and no one is a square, and invites everyone in. How can you refuse?”

With Better Nate Than Ever having the elements of a Disney film, we can’t have a list of recommendations without including the 2006 American musical television film High School Musical, written by Peter Barsocchini and directed by Kenny Ortega. It is the first installment in the High School Musical franchise and centers on two high school juniors Troy and Gabriella who belong to different high school cliques. Troy is the captain of the basketball team while Gabriella is a transfer student who excels in academics. When the school holds auditions for the high school musical, both of them try to land the lead roles, and a friendship and romance blossoms between the two. The main cast of the film includes Zac Efron, Vanessa Hudgens, Ashley Tisdale, Lucas Grabeel, Corbin Bleu, Monique Coleman, Joey Miyashima, Bart Johnson, Olesya Rulin, and Alyson Reed. The film received positive reviews from critics and was a commercial success leading to a media franchise and series of sequels, High School Musical 2 (2007) and High School Musical 3: Senior Year (2008). In an article by Vox, they wrote about High School Musical’s cultural legacy and how the film was released by Disney at a perfect time. They wrote, “High School Musical had the basic ingredients every musical needs to succeed — an engaging cast, catchy songs, and a relatable theme. But it also had something perhaps even more crucial: perfect timing.” They added, “In 2006, High School Musical broke away from this trend immediately. Not only was it the rare Disney Channel movie aimed at teens and “tweens” rather than kids, but it was one of the relative few at the time that boasted its own soundtrack. And it was a “true” musical”

Another teen musical worth watching is the classic 1980 teen musical film Fame directed by Alan Parker. The film follows the lives of students at New York’s High School of Performing Arts and centers on the struggles of these students grappling with different issues as they go through high school and strive to achieve their dreams to become successful performers. The film received critical acclaim and received several awards and nominations, including two Academy Awards for Best Original Song (“Fame”) and Best Original Score, and a Golden Globe Award for Best Original Song (“Fame”). In a review published by Roger Ebert, the film was praised for its wonderfully created characters and its take on the adolescent experience. “This isn’t a movie that locks its characters into a conventional plot. Instead, it fragments the experiences of four years into dozens of vignettes, loosely organized into sections titled “The Auditions,” “Freshman Year,” and so on. We get to know the characters and their personalities gradually, as we see them in various situations. The effect is a little like high school itself; you come in as a total stranger and by the time you leave, the school has become your world.”

Just like Nate who feels he’s different from other kids his age, Jamie Campbell in the coming-of-age musical comedy-drama film Everybody’s Talking About Jamie tries to find his light as he navigates life. The film is directed by Jonathan Butterell (in his feature directorial debut) from a screenplay by Tom MacRae based on the stage musical of the same name. The film is based on the true-life story of 16-year-old Jamie Campbell and his journey as he aspires to become a drag queen. The film stars Max Harwood in the lead role with Sarah Lancashire, Lauren Patel, Shobna Gulati, Ralph Ineson, Adeel Akhtar, Samuel Bottomley, Sharon Horgan, and Richard E. Grant in supporting roles. The film has received positive reviews and was nominated for the BAFTA Award for Outstanding British Film. In an article by the Independent, they commended the director of the film and wrote, “It’s much to director Jonathan Butterell’s credit, then, that his film works so coherently – this isn’t just an adaptation, but a revitalization. And one that, crucially, is able to replicate the musical’s effervescent joy while still doing the work to place it in a more relevant context.”

The musical comedy film Pitch Perfect may appeal to older viewers compared to Better Nate Than Ever but it also features great musical numbers and themes of finding your voice and the importance of friendship. The film was directed by Jason Moore with a screenplay by Kay Cannon. The cast features Anna Kendrick, Skylar Astin, Rebel Wilson, Anna Camp, Brittany Snow, Hana Mae Lee, Alexis Knapp, Ester Dean, Kelley Jakle, Shelley Regner, Wanetah Walmsley, Adam DeVine, Ben Platt, Utkarsh Ambudkar, John Michael Higgins, and Elizabeth Banks. The story centers on Barden University’s all-girl a cappella group, The Barden Bellas as they compete in the Nationals. With the help of freshmen student Beca who joins the groups, she attempts to integrate some changes in the group’s traditional arrangements. The film received relatively positive reviews and spawned two sequels, Pitch Perfect 2 (2015) and Pitch Perfect 3 (2017). In Empire’s review, they wrote, “The haphazardness is part of the charm, skidding from one loopy set-up to the next, but never losing sight of its story. You can go on the weird flights of fancy you want, as long as you have well-written characters to anchor it.”