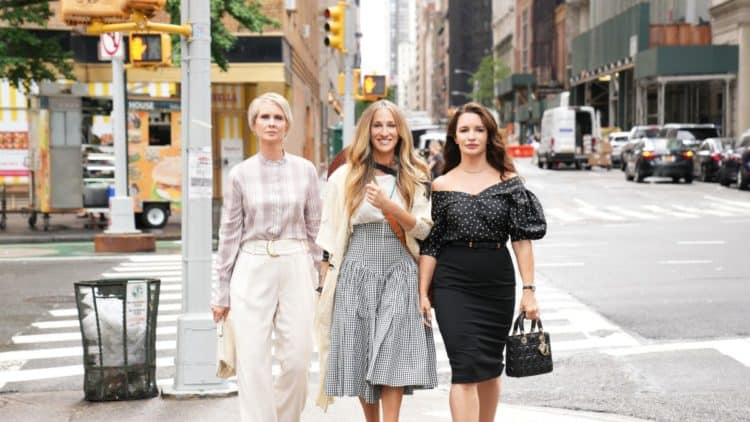 The Sex and the City revival/sequel, And Just Like That… was a lot of things— a reunion of our favorite onscreen girlfriends, a nostalgic trip down memory lane, and a new chapter for the series’ characters. The sequel might not be everything we wished for it to be, but it was still enough to satisfy our Sex and the City withdrawals. The ten episodes went by in a blink of an eye. Before we knew it, we were saying goodbye again to Carrie Bradshaw and her group of friends. A welcome reprieve came in the form of And Just Like That… The Documentary that gave viewers a closer look on what really happened behind-the-scenes of the show’s production. Here are five insights we had after watching the documentary:

5. It takes a village

The show’s revival would not have been possible without the collaboration of so many people who were also a part of the original franchise— from the previous series’ director and writer, Michael Patrick King, to the show’s wardrobe stylist, Molly Rogers, down to its lead stars, Sarah Jessica Parker (Failure to Launch), Cynthia Nixon (Killing Reagan), and Kristin Davis (Holiday in the Wild). There were so many moving parts to the series, and each and every one had equal importance. Watching the revival unfold was like witnessing a reunion of old friends who once shared something really special. It did not take long for everyone to get into character and find their groove. It was a special project that did not need much embellishments to shine on.

4. The devil is in the details

The meticulousness and attention to detail in each scene was astounding. The crew and cast members knew what they wanted, and they were relentless in their pursuit. It was no walk in the park to have each shot meticulously planned, every set recreated to a T, and each costume scrutinized from every angle. It was indeed a labor of love that was felt on and off screen. It was also so interesting to see the cast members involved with the behind-the-scenes action, the whole team felt like one big family who were set on achieving a common goal. There may have been some hiccups along the way, but it turned out to be a memorable project that was worth the blood, sweat, and tears.

3. Some things are better left unsaid

One of the focal points of the revival was how the show’s creator was going to include the storyline of Samantha, portrayed by Kim Cattrall (Filthy Rich), whose ongoing feud with some of the show’s cast members may prevented her from joining the sequel. Samantha was such a vital part of the original series that it was almost impossible to imagine her totally erased from the story. Fortunately, the showrunners had better ideas in place for the character. Samantha was integrated into the new storyline through thoughtful gifts and heartfelt text messages. We were able to feel Samantha’s energy through these exchanges, and it was enough to satisfy our longings for a reunion.

2. The proof is in the pudding

It is important to remember that the series is its own identity from the original sequel— there is no use to compare and contrast. Both shows may have had their own fair share of highs and lows, but what’s important is the emotions the shows have evoked during its run. Sex and the City has become a cult classic, because of its fun storyline and relatable characters. It told the story of strong and independent women, who were finding their way in the world. It also revolved around the importance of female friendships, and how everything does not have to be a competition. The revival took all these a notch higher, and shared a new outlook on how to welcome one’s middle-aged years with open arms.

1. It’s not the destination, it’s the journey

We can’t imagine how fulfilling it might have been for the entire series to come full circle. Talks on a series revival was ongoing for the past couple of years, and it is heartwarming to see it all come to fruition. Good things take time, and this was definitely worth the tumultuous wait. The documentary showed us the sleepless nights and great lengths each team member of the show had to go through in order to give us a memorable experience. As avid viewers of the show, we join the cast and crew in celebrating each milestone. It was far from an easy journey, but the warm reception and happy faces made it all worth it in the end.