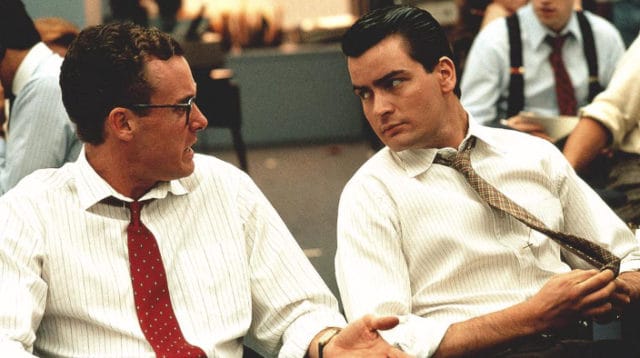 John C. McGinley is the kind of guy you don’t always know how to take since he could be joking and he could be pulling a straight face while he’s laying into someone without any attempt to be nice. His time on Scrubs unfortunately counts as TV so that won’t be seen in these clips which is too bad. As Dr. Cox he was hilarious and yet so hardcore in his sarcasm that he could rattle just about anyone, except for a few select people that he was never able to get to. In the movies though his attitude swings from one end of the spectrum to the next, and it’s awesome.

The guy is just funny in a way that doesn’t really need to be explained.

He’s got such a biting wit that it almost makes a person afraid to open their mouth lest he take whatever they dish out to him and fling it back with enough sarcasm added that it shatters their precious ego. This guy is that good, and yet he’s so quick and cutting in his delivery that you almost have to see him coming to really try and match wits with him.

This was kind of unexpected and might have made some people cringe considering that this movie belongs to Disney, but it was still extremely funny. John can play a role so perfectly that you really don’t know what’s coming until it’s out of his mouth and you have to ask yourself if he really just said what you thought you heard. The unexpected is always to be expected with this guy.

So this scene isn’t really comedic but it’s definitely karmic in nature, wouldn’t you agree? After all Harp really had it coming after all the grilling he’d been giving Utah and Pappas. Slugging your commanding officer isn’t that great of an idea but it certainly sounded good at the time I suppose. Of course not too long after that Pappas met an untimely death and Utah had to go after the bad guys on his own.

Chuck is that guy in life that kind of makes you sick but that you’re glad you met because he knows something about everything it seems and he’s so nice that you can’t help but like him unless you’re determined to find something wrong with him. A lot of people assume that someone this nice must be hiding some secret that they don’t want people to know about. But with Chuck the only secret was that after losing his wife he put so much of himself into the world around him that caring was second nature to him, almost as easy as breathing.

Office Space is one of the best and most classic movies made within the past two decades because it paints a vivid picture of the life that so many people want to escape. The Bobs that are brought in to essentially question the role of each person in the company see Peter and listen to his story and ultimately decide that he’s the kind of guy they want for management. Isn’t that typical?

I really wish I could have put clips from Scrubs on here.