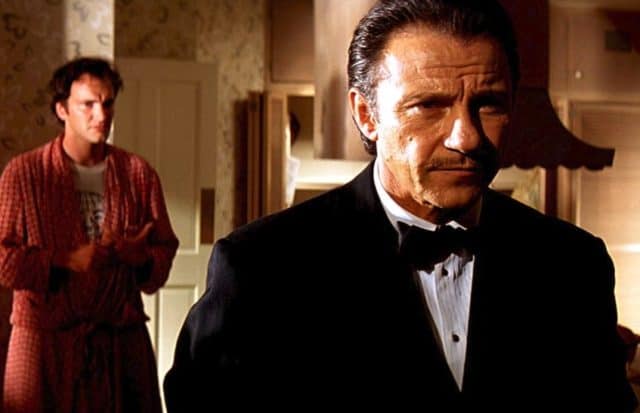 To look at him you might not think that Harvey Keitel is much for comedy in a movie. His funniest scenes though come when he’s trying to be dead serious and it comes across completely deadpan. That’s when you get the idea to laugh but even so you might wonder why you’re doing it. In some cases you might even feel guilty for laughing since the situation seems so dire or so serious that such a response would be anything but what’s necessary. And yet, the way he delivers his lines at times makes it very difficult to NOT laugh, since he’s completely serious, but the situation is so messed up that laughter seems to be the only way to get through it.

It makes sense, trust me.

The trailer for this one was necessary because throughout the movie he has a lot of scenes in which he’s either being very serious or he’s laid back just enough to think that the moment could call for some dark comedy. That’s a big reason why it’s so hard to laugh with Harvey Keitel in a movie, he does the dark comedy bit perfectly and it makes you wonder just why you’re laughing at this.

4. From Dusk Till Dawn

At this point in the movie we already know that Seth Gecko will throw down with anyone that seems to have a problem with him. After all he broke the doorman’s nose and finger just for getting in his way. So when Jacob asks him why he’s such a loser that he can’t tell when he’s won he’s ready to go then and there. But when he explains himself Seth decides to drink with him instead of beat him into the floorboards. That’s called respect.

He’s more of a warm and fuzzy devil for the most part in this movie, a guy that isn’t so big and bad as the legends and myths say. But come on now, unless you’re a neo-Nazi or have aspirations of being like Hitler you have to admit that watching even a guy dressed like one of the most evil men in history getting a pineapple rammed up his back door pointy end first is kind of satisfying.

Nicky is not a nice guy and he knows it, and more to the point he doesn’t care. The point of the character is that he thinks he has everything well under control at all times and unfortunately this isn’t the case. His nemesis, Chili Palmer, is the guy that everyone guns for and yet has everything figured out as much as possible, which could be why Nicky hates him so much. It can’t be easy trying to outfox a guy that seems to know your every move.

The Wolf is just the man, and there’s no arguing about it. He doesn’t even have to look imposing since his attitude is either work with me or do it on your own. He’s the kind of specialist that’s brought in to fix ‘problems’ when they arise, and he doesn’t accept anything but obedience when he’s at the helm.