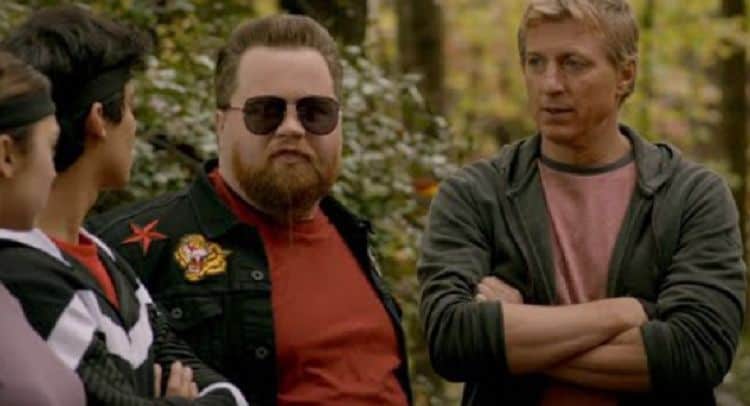 It’s difficult to say which characters should be seen less and less in Cobra Kai since each one of them has contributed to the story in one way or another, but there are a few characters that might be better off slipping into the background for the coming season, and a couple of them might sound kind of surprising since they would appear to be needed more often than not. But in the interest of the story, it does feel that some of these characters might need to take a back seat, especially if a bit of fan service is going to be given and we actually do get to see a couple of faces that fans are really hoping for. It’s a longshot at this point, or at least it feels like one, but a couple of faces from the past could be a great way to keep the story going and help to integrate the movies that helped to make the legend last a little longer. With what we’re hoping to see in the coming season it does feel as though letting some of these characters slip to the back of the bus would be a good idea, especially since a few of them aren’t really adding to the story at this point. It’s not really an effort to get rid of them, but instead to simply push them to the background for a while until they’re really needed.

Here are a few of the characters from Cobra Kai that we could stand to see less of.

This doesn’t feel likely, does it? That’s why Hawk is the last on this list since he’s one of the characters that a lot of people are hoping to see more of in the coming season and is already featured in a noticeable way in the trailer. For obvious reasons, Hawk has become kind of a super-aggressive form of Johnny in his own way, someone that’s not going to be told what to do and will gladly throw down whenever the moment presents itself. For those that want to say that Johnny only used force when he absolutely had to, let’s not forget that he knew he could beat someone up at any time and wasn’t hesitant to do so in the past.

Why is she still there? It’s true that in the high school setting she’s bound to show up since she is a friend of Samantha’s and she is someone that is kind of there to provide another voice, but so far she’s been kind of useless and isn’t really serving a purpose any longer. It’s not necessary to kick her out completely since it’s likely that Samantha will need someone to talk to since it sounds as though Aisha isn’t going to be around for the entire season if she’s there at all, but unless Moon is really needed she might be a character that’s better off being seen and not heard from as much as possible.

This is another one that probably makes people blank since Daniel’s wife is a part of the ongoing story since their marriage might very well be ending, and it could be that she’ll be heading out at any rate. But it does feel that she’s not adding much to the story other than to tell Daniel what she thinks of his vendetta against Cobra Kai. It’s easy to see why she’s not entirely understanding of the whole thing, but at the same time it feels as though she could at least try to understand just why her husband feels so strongly about this, and why karate is such an important part of his life.

Again, Daniel’s family is an important part of the story because of him, but Anthony is a character that never goes further than the simple and spoiled kid that he obviously is. Some might want to say that his arc could possibly be more important in the days to come, but with everything that’s going on with Sam at this point and with Daniel being one of the main characters, it feels as though Anthony could easily lose himself in his video games and be a background character without any further impact on the story, and things would be just fine.

There’s a reason that he was put into the story, and a lot of people would probably stick up for him simply for the novelty of having a character that’s somewhat skilled and that can be laughed at because he’s kind of ridiculous. But he’s something of a walking 80s cliche that’s playing the part of a karate student and should probably end up on the wrong side of a beating eventually since otherwise it’s bound to happen that he’ll become a comedic anchor dragging the show down whenever he appears.

This isn’t a bid to get rid of these characters, but unless they can be developed any further it’s time to send them to the background for a little while.