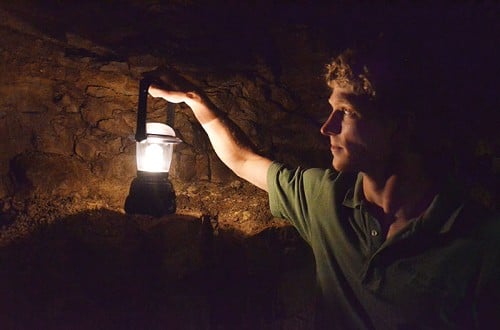 Caves aren’t known for being glamorous, tidy, or even particularly safe. They’re great big holes in the earth that can go on for miles or end after several feet. They are often used by animals as places to sleep or as homes, but rarely do humans make good use of them any longer. Way back in human history caves used to be the thing to keep the rain, snow, and inclement weather away. At that time they were the ideal home despite the fact that there wasn’t much of a chance of keeping the cold out when winter hit. Since then however mankind has moved out of the caves and left them to the wilds, which have reclaimed a good number of them as their own.

And yet in the movies mankind never seems to learn how dangerous caves can really be.

This is the story of a stranger that wanders into a remote outpost one night, starving and badly in need of help. He appears to have been on the run from something, or someone, that has caused him to fear for his life. When the small expedition of men go searching for the cave that he’s told them of however they quickly find out that not only is this a trap, but that the man they’d thought was a helpless pilgrim is in fact the killer, and a cannibal to boot.

When a group of friends go spelunking into an unknown cave system they soon find out that the going is far rougher than they’d thought it would be. After a cave-in that almost claims the life of one of their number they realize that they’re lost, they have only half the supplies they really need thanks to mishap, and worst of all, they soon find out that they’re not alone.

Mankind had never gone past a certain depth when traversing the deepest areas of the world. In fact mankind has gone less than ten miles into the earth’s surface, which is estimated to be just a fraction of the true depth that the world has to offer. In this film though the team that travels below the surface has gone deep enough to have unearthed something that by all means should have stayed hidden.

2. The Hobbit: An Unexpected Journey

Not all caves are so deep, and not all are occupied. In The Hobbit, the troll cave that the adventurers stumble upon is a veritable treasure trove offering up riches the likes of which the dwarves and Bilbo have not seen before. It also grants weapons that Gandalf has no qualms telling Thorin would be better served at his disposal than they by being discarded.

A good part of this film takes place in the fictional caves that supposedly run beneath Astoria and possibly parts of Cannon Beach. The young adventurers must find their way forward in an attempt to not only save their own lives but to find a treasure that might allow them to halt the sale of their homes to a wealthy land developer.

So they didn’t all have lanterns, but they had a light source, that’s close enough really.