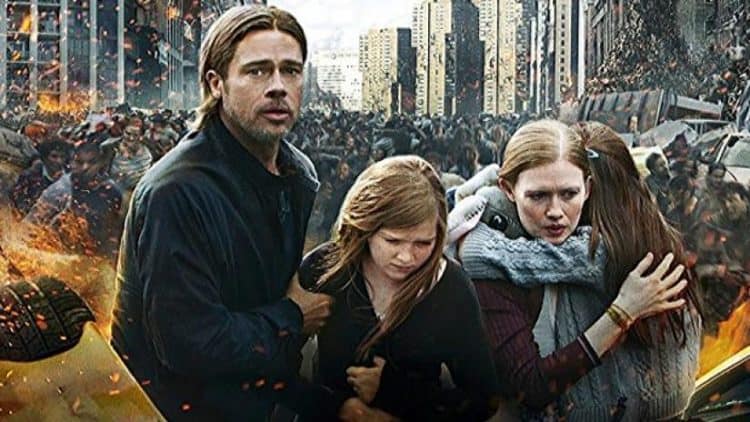 With Alex Crisp of We Got This Covered throwing zombie quips left and right one might think that there’s more than a little hope left for World War Z 2, but right now development hell appears to be it’s continual home since far too many directors felt the need to walk away when the sequel was still considered to be a great idea. At this point there’s no telling just whether Brad Pitt or any of the stars of the first movie would come back since there’s been enough time that’s passed that things could be very different in this particular universe when it comes to the zombies and if there’s any indication of this it’s been that in some movies the zombies have actually been evolving in various ways. In The Walking Dead fans were freaked out to hear what sounded like walkers talking among each other at one point only to realize quickly that the Whisperers, one of the deadliest factions in TWD, had finally been introduced. Then there’s the idea that came to Zombieland: Double Tap, when they introduced different types of zombies that had different characteristics that made them more or less dangerous. The zombie game has changed a lot since World War Z came out, and trying to predict what the world that Brad Pitt helped to bring to life would be kind of difficult at this point.

Thankfully the zombie craze is still around and people are still entirely receptive to it since the movies and TV shows we’ve seen have still been getting plenty of attention. One thing that anyone should be able to admit is that in the years since the original The Living Dead things have certainly changed. Dani Di Placido of Forbes would likely agree. Remember when zombies could only shamble and shuffle towards their intended prey, but it didn’t matter because there were usually factors that worked against the survivors? I’d thought it disconcerting enough when watching the Dawn of the Dead remake that the zombies got up and RAN towards their prey, but World War Z had to kick it up a notch as the zombies weren’t just running any longer, they were actually mobbing, coming together as though they were a single entity bent on the havoc and destruction they could initially wreak. The undead in WWZ however were still different in a way that they didn’t conform to other stereotypes that had been created by other zombie movies. Keep in mind that these creatures were looking to bite their victims, not necessarily eat them. The zombies in WWZ were looking to spread the virus as it was deduced, and would not seek to infect a host that was already exhibiting certain markers that the disease could somehow sense would kill the host eventually. In other words, if you had an incurable disease in WWZ you were more or less safe since the virus that was acting through so many wanted nothing to do with such a host.

Plus, in other zombie movies it can take just a scratch, not only a bite, to transmit the disease, and in some movies and shows it works quickly on some and very slowly on others. Heck, in the Resident Evil movies the mutations never stop as they continue to get bigger, stranger, and even more powerful as constant tinkering with the T-virus eventually make super-beings that are so insanely powerful that they come with prediction software embedded in their brains that allows them to assess a threat and neutralize it. Thankfully WWZ didn’t go that crazy as it started at ground zero, more or less, and allowed us to watch as the world fell to the disease that was being spread by the out of control zombies that created more like themselves and moved on. One has to wonder though what kind of scenario would be left if the virus did indeed succeed in its goal to keep spreading. What then? If ever human being in the world was infected and there was no one left to spread the virus to, would the infected just keep wandering around with nothing left to do? It’s an interesting question, but another one is whether a sequel does come, will the zombies be the same or will the virus mutate somehow and be able to evolve in some way to bypass the attempts of the surviving humans to mask themselves by creating markers that make them ‘disappear’ to the virus for an unknown time period? These are interesting questions that would be great to have answered, but only if every piece comes together the way it needs to for such a sequel.

Again it’s not certain whether we’ll see it or not, but the interest is still there since there’s still the question of how the world would look once the virus was finally taken care of, if it ever was. Hugh Armitage of Digital Spy has more to say on this matter. Until that happens though we’ll have to keep imagining the outcome.