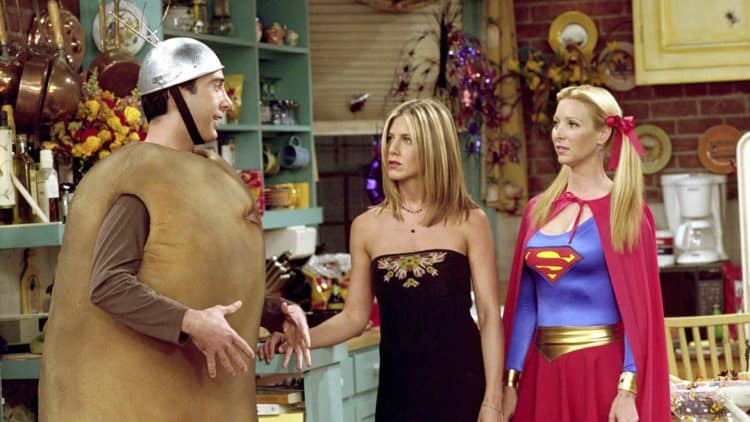 Oen can’t expect TV shows to neglect the holidays, especially one such as Halloween when the opportunity to dress up in fancy or outrageous costumes affords a person the chance to show their more zany and flamboyant side. TV sitcoms have been enjoying Halloween for many decades now since the American people have taken what was once a very archaic festival and turned it into a highly commercialized event that pulls in all kinds of money and allows people the chance to see some of their favorite stars dress up in costumes that make them look absolutely enticing or ridiculously funny as they get into what’s left of the Halloween spirit, or rather, enjoy the festivities that have come from the continued adherence to this coming day, and entertain the masses. The 90s were a very fun time for this kind of thing when it came to sitcoms and the sitcoms that people enjoyed a couple of decades ago were more than a little humorous as well as crazy sometimes with their content. But people enjoyed them, and the memories they brought. One great thing about the 90s sitcoms is that they didn’t often have to be that careful with their content, which provided a lot more fun as a lot of people can recall.

Here are some of the most awesome Halloween episodes from the 90s.

As if Steve Urkel wasn’t enough on any given day, one might think that Stevil was a little over the top, even if he was kind of an annoyance more than anything. Most folks might have thought that Family Matters was bound to be as cute and innocent as always, and they’d be right since their Halloween episodes were pretty calm and composed compared to many others. But the creation of a doll that bore the likeness of the nerdy, annoying kid that simply wouldn’t shut up sometimes is kind of scary if only because he was set on being just as irritating as his human counterpart. That’s Halloween though, a time to see who can pull off the greatest scare.

4. Friends – The One with the Halloween Party

The arm-wrestling scene in this episode was by far one of the best ideas since it was funny up to a point and then it just became sad until it became funny again since Ross and Chandler made it clear that neither one of them were all that strong and that a gag can run for a good part of an episode. Tack onto that the costumes and the rest of the show and it was a success that a lot of people enjoyed since Friends was at one time among the most popular of shows on TV and there wasn’t a lot that they could that would be deemed as wrong or lame in the eyes of their fans. But oh, that bunny costume…shades of A Christmas Story come to mind.

Ever wonder just how many people might have tried on a mask before you did, and what condition their skin was in when they did? Okay, that is a pretty gross thought and doesn’t have much to do with the episode, but it is kind of interesting to wonder what might happen if a mask decided to adhere to a person’s face and eventually become their face. Goosebumps definitely asked a few questions and raised a few concerns that might not have been in keeping with its otherwise toned-down version of horror for the fans, but it also provided a good deal of entertainment that many people still remember fondly.

Leave it to Frasier to turn Halloween into an intellectual gathering of great minds that are as pretentious as they are intelligent, but the episode was kind of fun since the costumes were, as one would expect, rather impressive. But when Niles gets drunk and decides to defend the honor of the woman he cares so much for things take a very funny turn since when Niles gets intoxicated it’s quite easy to see that he’s a man that can’t hold his liquor and is bound to let his inhibitions fall neatly and pressed to the floor before he bursts forth in a drunken ramble that was hilarious to watch.

1. The Simpsons – Treehouse of Horror

People have been looking forward to the Simpsons Halloween episodes for years now since they always tend to offer something fun and engaging that pulls from pop culture in a very entertaining way. Now, since Disney purchased Fox and owns the Simpsons, it’s likely that they’ll have even more material to use in the coming years. But it’s still fun to see how they try to top what they’ve already done with each new Halloween episode. One might think that their ideas would dry up, but their writers continue to surprise us thankfully.

It’s almost here, and the Halloween episodes are in full swing.