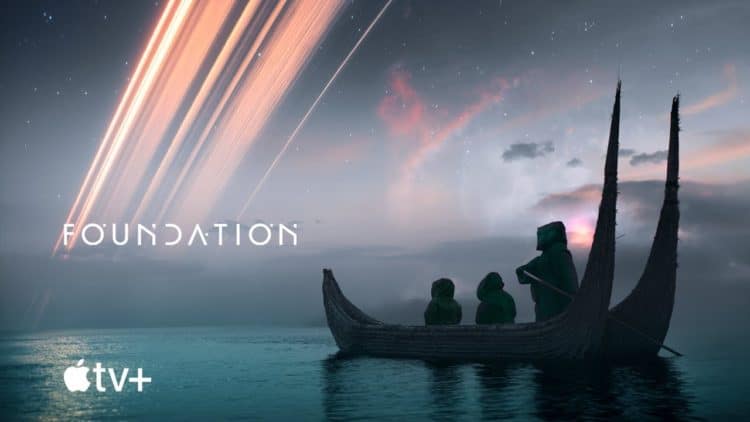 Whoever hasn’t heard of Isaac Asimov and read any of his stories, it’s time to sit down and focus on a few of the classics so you can better understand the upcoming Foundation series from a deeper standpoint. Thankfully the trailer makes things pretty clear since the Empire that’s been running things for so long is dying as it’s announced, and yet one thing that anyone in a seat of power is bound to do is hold onto that power for as long as they possibly can. This usually means doing anything and everything, without limits or boundaries, to maintain that same power base, no matter how horrible one must become. Those that are called revolutionaries are often those who seek another means by which to evolve, survive, and even break away from old habits that might have caused the fall in the first place. But power is, as many have seen, not an easy thing to let go of, and as a result, the struggle that will be seen in the Foundation series on Apple TV+ already looks like it will be tense and will possibly lead to an epic buildup within the series.

What’s truly disturbing about this series so far is the idea of the Empire being ruled by a cloned emperor since it brings about a lot of questions and a few theories on how the Empire might actually be failing while the emperor is insisting that all is well. That does sound like something a ruler would say when the walls are starting to crumble from within. The moment that the people, the followers, see the decay, the less likely it is for a ruler to explain that all is perfectly fine and that anything the people thought they saw was nothing at all, or of no consequence to them. In the meantime, Dr. Hari Seldon, played by Jared Harris, will continue speaking the truth as he sees it, which is the truth as it exists, no matter what the Empire wants people to believe or not.

The idea of Foundation is already looking like something that will draw in a lot of eager fans that have read Asimov’s work and will want to see how it’s been adapted. Likely as not there will be plenty of people calling out one mistake after another in their perception since Asimov’s work was released back in the 50s, and while the gist of the story is likely to be the same, hopefully, it’s bound to happen that updates will have been made and the story will have been adapted to the current era. If there’s one thing that a lot of critics understand but don’t always appear to apply, it’s the fact that stories that were written decades ago tend to reflect the thoughts and beliefs, and imaginative processes of the authors in that time period. Science fiction was quite popular back in Asimov’s day, but the concept of it has changed quite a bit over the decades as the stories have evolved and the technology has been updated continuously over time. Hopefully fans and critics alike will take this into account and remember that the spirit of Asimov’s story is what will be driving this, while the creative influences that are popular as of now will be helping it to stand out for the modern-day viewer.

It could be interesting to search out any and all debates that might emerge based on this series and see what people are saying since like it or not, a lot of what’s coming out these days is almost like a running commentary on the world around us. Some might say ‘duh, of course it is’ but it might be a little surprising to learn that there are still plenty of people that would prefer to watch a movie or a series and not have to think too much about the world they live in so that they can fall into the world they want to enjoy. But looking at the trailer it’s easy to think that plenty of people might draw parallels between Foundation and our world as it currently sits. The upside is that those who want to enjoy the series can still do so without any real effort.

The story already appears to be something that will draw people to step inside this world and see what it’s all about. One thing that is perfectly clear is that the Empire is indeed rotting from the inside out, and any dissent is going to be dealt with severely. Any story that features someone in power in this manner will often have a great deal of conflict that will need time to be fleshed out before things get personal between two or more characters. But the story looks tempting so far.