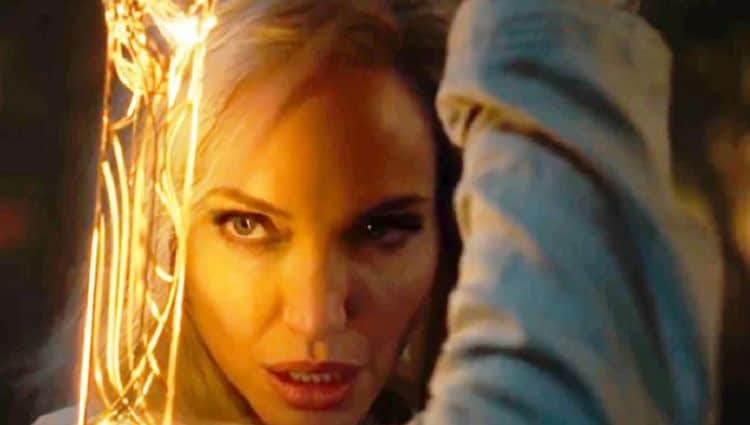 This time last year it was apparent that 2020 wasn’t about to get better any time soon and that the entertainment industry was going to be taking a hard hit since celebrities were starting to come up with PSA’s and other videos to stay relevant with fans while other people were simply trying to figure out how they were going to pay their bills. The Eternals has been an ongoing idea for a while, but there wasn’t as much buzz about it as there has been lately, and for good reason. But now that the release date is moving ever closer, people are starting to take greater note of what’s about to be seen and what it will mean for the MCU. In the meantime, we’ve been given a look at Angelina Jolie in her role as Thena, if only for a brief moment, and it’s already interesting to think that she’ll be cavorting about in a golden bodysuit and, as per her character, will be able to summon forth weapons composed of cosmic energy that is her birthright, much like the rest of the Eternals. What and who they’ll be fighting has likely been established in several articles, as their enemies, the Deviants, have been around just as long as they have. But the short teaser that we were given of the Eternals was difficult to glean much from, apart from the idea that the group is going to be impressive on many levels. The Eternals are thousands of years old after all and have been on earth a very long time, watching over humanity and helping to cultivate the species without anyone being the wiser. The movie is going to be their introduction, but what comes next isn’t really certain yet since it would appear that things either haven’t been planned ahead that far, or it just hasn’t been revealed yet.

It’s going to be interesting to see Angelina as a supporting character again since quite often she’s the main character, either the lead or someone very close to the lead. It might not be that different this time around, but it does appear that she’s not going to be the big deal in the movie. It would be easy to imagine that some folks are going to argue with that statement since she’s almost always a big deal no matter where she goes, but the reason for saying this is that Gemma Chan is going to be the lead, while the others will be supporting and might not have as much screen time or dialogue depending on how the story goes. The Eternals is a Marvel tale that has been around for a long time now, but it’s never really gained the same amount of attention as many of the other heroes, and at times their story has been a little confusing to the average Marvel reader, but since this is a new phase and therefore a new chapter, one can’t help but think that it’s best to just ride it out and see what happens. Thena’s character will no doubt be a tough as nails fighter and someone that is bound to be more steeped in battle lore than anything by the look of her, and likely will be intelligent but will also be more of a warrior than a scholar. Or it could be that each of the Eternals will have their special set of skills and be just as intelligent as each other, it could happen but it’s a hope that it won’t. Some variety between the characters would be nice, apart from their appearances and overall skill sets.

In some ways the Eternals appear TOO powerful since their abilities are due to their cosmic nature and the fact that they were created by the Celestials, meaning they’re able to channel cosmic energies in a variety of ways and can do pretty much anything they need to. They do have their own set of weaknesses, however, which does balance things out a bit. Thena, whose name was originally Azura, is bound to be one of the more interesting of the Eternals since reading about the character makes her feel a little more militaristic than the others, though it’s bound to happen that Jolie will play her as instructed, which means that we could get something a bit different from the comics, which is pretty normal when one really thinks about it since the MCU directors tend to want to veer away from the comics just a bit at times when creating their own vision. But what we’ve seen thus far might not be so bad since it could keep the audience’s attention while tweaking the overall narrative just enough to give a very impressive story that people will find appealing. And to be fair, sticking to the comics one hundred percent of the time would be a little too predictable.