Home
Television
Our Favorite TV Couples of the 1980s 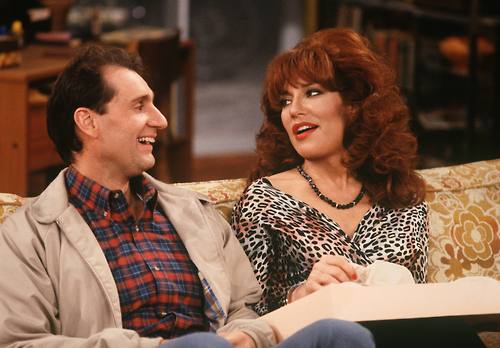 In honor of Valentine’s Day being just around the corner, we at TVOvermind decided to look back over the years and select the best couples on television. Over the next few weeks, we will pick a decade and share who we think depicted love the best on screen.  There have been many great couples over the years, so we had to sift through a lot of classic television episodes to find our favorite couples.  This week we will be discussing our favorite couples from the 1980s.  One couple were former hippies raising three children, one an affluent doctor and lawyer couple, and two of the couples on this set are featured on 80s’ shows that take place in an entirely different decade.  Here are the five best TV couples from the 1980s.

Cliff and Clair Huxtable from The Cosby Show

Despite all of the controversy surrounding Bill Cosby right now, it is hard not to love Cliff and Clair Huxtable.  They were the perfect TV couple raising five kids who were anything but perfect.  Sondra decided to quit law school to run a sporting goods store with her husband. Denise would drop out of college, Theo would eat them out of house and home, and Vanessa wanted to marry a much older janitor. Through it all, Cliff and Clair were still able to make time for one another and keep their relationship thriving.  The two will playfully compete with one another, which kept their relationship fresh, like when Clair won the “Smooth Contest” despite having just broken her toe. Clair even loves her husband so much that she monitors his eating habits and makes sure that he is eating healthy. It is almost like she is the mother of six and not five.

Al and Peg Bundy from Married… with Children

Al and Peg Bundy may seem like an odd TV couple to include on this list, but they truly were one of the funniest TV couples of the 80s and the 90’s.  Though they did not always show it, the two were clearly in love having been an item since their days in high school. Peg would try to get Al’s attention during his glory days playing high school football. This method worked as he and Peg would eventually tie the knot and have two children together.  Though Al rarely shows his love for Peg, when he does it is very noticeable. Peg got her Valentine’s Day wish in the season two episode, “Peggy Loves Al — Yeah, Yeah, Yeah,” when Al utters the three words his wife had been yearning to hear: “I love you.”  Before he tells her this, he does let her know that she should know that he loves her without having to say that.

Though Happy Days was on from 1974 — 1984, the series is set in the 1950s and 60s. That does not mean that Howard and Marion Cunningham cannot be one of our favorite TV couples of the 1980s.  They were the typical husband and wife of the 50s with Howard working at his hardware store and Marion staying at home and raising Richie and Joanie. She would also look after Fonzi, who she was allowed to call by his first name Arthur. The couple did argue from time to time. In the episode, “Marion Rebels,” Marion gets tired of being at home all the time and decides to get a job as a waitress at Arnold’s.  Howard is able to apologize to his wife and she returns home.  Marion loved her husband so much that she and the kids even put together a “This is Your Life” style birthday for Howard to help him get over his mid-life crisis.

Family Ties ran on NBC from 1982-1989 and was the series that started the career of Michael J. Fox, who played young Republican Alex P. Keaton. Alex’s parents were Steven and Elyse Keaton and were liberal hippies that grew up in the 60s.  The two would eventually marry and raise four children: Alex, Mallory, Jennifer, and Andy.  Elyse would become an architect and Steven a station manager for a local television station.  Even though they did not agree with the Reaganomics views of their children, Steven and Elyse still loved them as much as they loved one another.  The couple would even try to make time for one another as was depicted in the in episode, “Not with My Sister You Don’t,” which saw Steven and Elyse going away for a romantic weekend and the kids having a wild party.  Steven cared for his wife so much that he even gave up watching Monday Night Football to join a book club. A man must really love his wife if he picks her over sports.

Jack and Norma Arnold from The Wonder Years

Like Howard and Marion Cunningham, Jack and Norma Arnold are a TV Couple from a show broadcasted in the 80s that takes place in an earlier time. Jack and Norma are the parents on the NBC series The Wonder years that ran from 1988-1993, but is set 20 years earlier. Jack was a hard-working and stubborn man, while Norma was the happy stay at home mother.  Jack would constantly be yelling at his three children, but very rarely raised his voice to his wife.  In the season two episode, “Pottery Will Get You Nowhere,” Jack and Norma do fight over Norma taking a pottery class. Luckily, by the end of the episode the two reconcile. In season three on the episode, “Faith AKA Death and Taxes,” Norma ends up losing all the tax receipts needed for filing. However, Jack does not get mad at his wife.  In season four, Jack realizes how much his wife adores the appliances in the kitchen (hey this is the early 70s), so he decides to ask for a raise to get her a new stove.  He even risks having to travel during Thanksgiving to make his wife happy. Luckily, everything worked out when he makes a surprise trip home to surprise the family and gives Norma a hug and kiss on the tarmac at the airport.

Who was your favorite TV couple of the 1980s? Let us know in the comments section below.