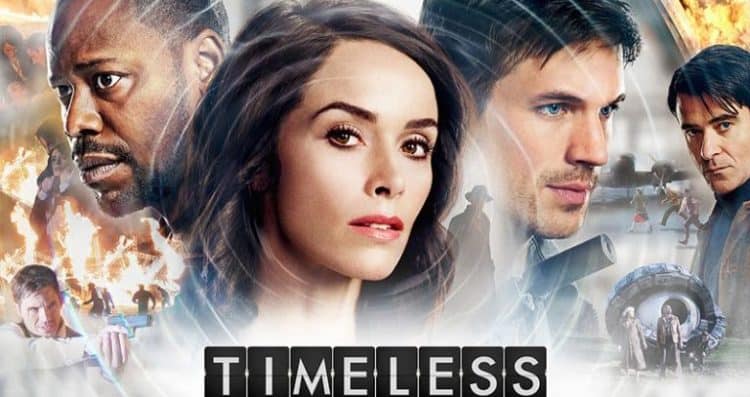 Thanks to the efforts of its fanbase, NBC has announced that the twice-canceled show Timeless gets a 2-hour movie to wrap up the series.  This is not a total surprise – at least to me.  In 1968 the original series Star Trek was given its third and final season because of a fan campaign. At the time, it was fair to see it as a one-off.

Today,  the power of a strong fandom to buy a show more time is no longer unusual.  Heck, this save for Timeless isn’t even the first of the canceled 2017-18 shows to be saved with the help of fan campaigns.  Aside from the rescues for Timeless, there’s the  Netflix series Sense8,  Syfy‘s The Expanse, Fox‘s Brooklyn Nine-Nine, and Lucifer.  All of these shows got some kind of show extension with help from fan campaigns.

Yet there are still a few TV pundits that say fanbases have no impact on saving a show.  You would think that by now the facts would speak for themselves.  TVInsider did an article that listed 16 shows saved by fan campaigns, and they’re missing an important one, Fox’s Fringe.

Fringe is a big miss on the list of successes save-our-show campaigns.  It, like Timeless, is another two-time save of a show.  To help secure season 4 the fans sent Red Vines to Fox.   However, it’s how they got their season 5 that’s really impressive.   The successful Twitter hashtag campaign they created is has become the model for every show campaign since.

How Social Media Has Changed the Impact of Fanbases

When looking at lists like the one TVInsider it’s hard not to notice the increase in show saves with the advent of the internet and social media.   Yet, every time a show’s fanbase attempts to save their show,  on various entertainment industry websites you’ll find commentary like the tweet below.

'Considerable Economic Obstacles' = Like all broadcast shows #Timeless was produced at a loss subsidized by the producer (Sony).
A wrap-up movie adds little value to its resale, so Sony's not willing to spend more money.
"The story" & "What fans want" are irrelevant. https://t.co/KuYvIqhNms

While the “economic obstacles” point on its face is correct, the thinking behind the above tweet is from the age before social media.  In a world where advertising is no longer completely controlled by the networks, the noise of a fanbase can positively or negatively affect the brand.  For better or worse this has given what the fans want” some power to impact a show’s fate.

Is the negativity spewed about the idea of fanbases being relevant to a show out of a fear of fans thinking they have total control in these things?  The dark side of fandoms is a real thing, but that doesn’t negate that they also have some influence on network decision-makers.  Maybe it’s a lack of understanding about the power of social media.  Of course, it could be just a peevish refusal to admit that times and business models do change.

The reason or reasons why some people throw online tantrums when fans engage in a successful save-their-show campaign is speculative.  All that’s noticeable is that there’s always some within the industry that do so.  They make snarky comments that fans are wasting their time when they attempt to keep a show alive when it’s being canceled.  If the fans fail, they are quick to belittle them for trying.  When a campaign is successful – like the one for Timeless has been – the responses are equally sour. Luckily, fans aren’t fazed.

Maybe it was the helicopter banner over Comic Con #SDCC? pic.twitter.com/aD1miWsDeI

Actually,  the rational and “the delusional” explanations, as well as the helicopter, are contributors to why Timeless gets a 2-hour movie.  All three needed to happen for the Timeless movie deal to occur.

This isn’t an argument saying that Sony didn’t cut their price.  It’s highly likely – although we have no idea who cut what so that now Timeless gets a 2-hour movie.  However, without all the fan campaigning there would be no point in Sony taking that kind of immediate loss.

That there is a synergetic situation occurring is what naysayers miss about “save fill-in-the-blank” show campaigns. It’s the noise of a fanbase that makes companies bother trying to make a show’s losing proposition a winning one.  The helicopter banner at San Diego’s Comic-Con was that final push needed to make Sony and NBC find a way to make the money for the Timeless movie work.

In an exclusive interview with USA Today, Shawn Ryan, one of the two Timeless creators as well as an executive producer, makes that point clear.

I know for a fact that the passion of the fans had an impact on NBC and (producing studio) Sony, without a doubt. (…) All the helicopter signage stuff at Comic-Con was very much on their radar. Trending on Twitter, months after the cancellation, was super-impressive.  It’s such a passionate fan base.

If one still can’t believe that a fanbase can help influence the outcome of a show’s fate using social media.  Here are two basic points.   From a business perspective, the entire point of social media is to influence people to buy your product – and it works really well.  Can it sway opinions?  Well, no one thinks the Russians are spending all the time and money attacking the US elections via social media because it changes nothing.

Because, yes, it is still about the money.  It’s just not as straightforward as it used to be.  Timeless having such an engaged fanbase is one reason why a Timeless wrapup movie makes sense.  It makes the series a complete product that’s excellent for streaming.  The thing is, part of that excellent product is the fanbase.

There’s a basic model of television that says viewers are the product that networks sell to advertisers. That’s exactly what makes a fanbase valuable. They aren’t just watching the show, they are engaged with it.   There’s no point in Sony shelling out more money to wrap a low-rated show that no one is talking about.  However, a group of highly engaged viewers is social media gold for advertisers.  Those invested fans are deliverables   Getting a darn helicopter with a banner saying “You Guys Want to Get Rufus Back, Or What? #SaveTimeless” flying over Comic-Con is super-high engagement.

Then there’s the advertising side of things.  Timeless gets a 2-hour movie and NBC gets at least six months of direct positive spin across social media that helps the brand sell other shows to advertisers.  The flip side of that is that the negative spin would not have been pretty.

So, it looks like I'm gonna have to re-think my NBC ban. Anything for #Timeless!

Without these financial benefits factors, saving Timeless very well could seem like throwing away money.  It’s not though.

Bottomline: It’s the Fans That Made The Timeless Movie a go

Social media mixes the personal – like viewer passion for a show – with the business of advertising.  Because of this, a fanbase is now easier to measure, and thus fanbases have become more valuable.  Likewise, social media is why the efforts of a fanbase to save a show have become more likely to succeed than in the pre-social media days.  These elements have empowered fans to speak up and fight for what they like.

In the case of Timeless, it’s fair to say that without the efforts of the “Clockbusters,”  Sony and NBC wouldn’t have had the long goal financial incentives to make this Timeless movie.   Like it or not…

Your mission is complete, #Clockblockers! #Timeless will be back for a two-part series finale on NBC. pic.twitter.com/wW6fhS0rPI