Home
Movies
Fan Theory: Donkey from Shrek is a Bad Kid from Pinocchio 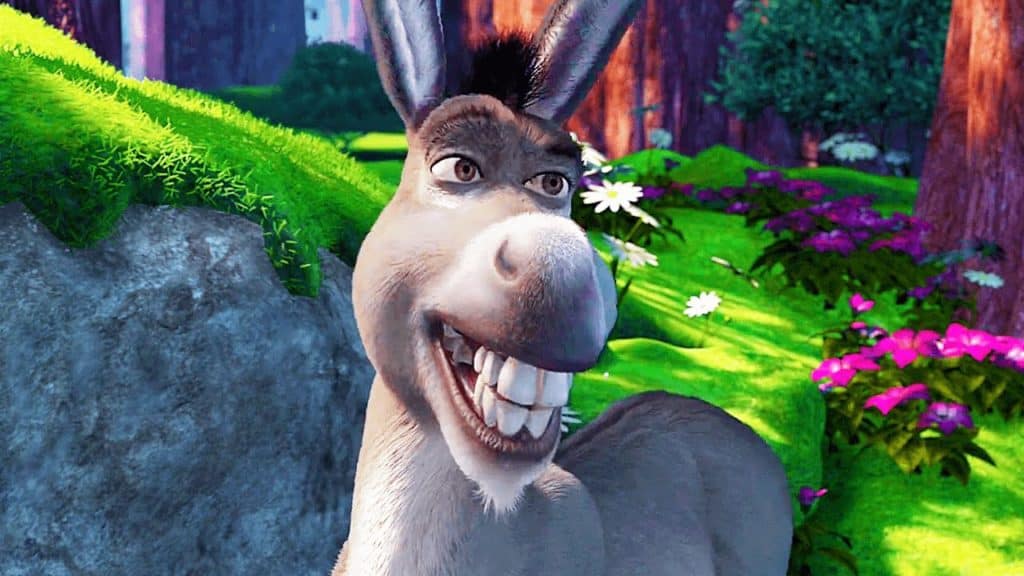 Looking up fan theories is a lot of fun sometimes since it shows how people think and what direction their thoughts are going is interesting given that it ends up opening up one option after another. This one in particular is fun since it builds from a very dark moment in a kid’s movie and turns it into something positive and definitely quirky. A lot of people know who Donkey is from Shrek, but thinking about him in light of another movie is likely something that a lot of people have missed. You can’t help but think that Donkey is fairly normal when it comes to the movie Shrek since there are so many magical creatures roaming around that people might not think twice about why he can speak. But the fact that Pinocchio is a part of this movie as well might throw a lot of people off, or it might allow them to focus on the connection that some folks have already made, that Donkey was actually one of the kids that turned into a, well, donkey, after smoking, drinking, and acting like a jerk.

Some folks might say no way to this since Donkey is such a nice and lovable character, despite being annoying as hell sometimes, but the theory isn’t really that tough to dive into since if anyone bothers to remember one of the more traumatic movies that Disney released back in the day, they might recall what happened to bad boys. From that point it’s easy to think that Donkey might be some random bad kid that was shipped off after becoming a donkey, only to regain his voice and his sense of self, at least some of it, later on. There are definitely a few holes in that theory, but if one dances around them and simply accepts the idea that Donkey is in fact someone that used to walk on two feet instead of four hooves, it becomes a simple matter of thinking that yes, this story does connect with Pinocchio.

That’s about the long and short of it really, since stating that Donkey came about thanks to Pinocchio is pretty simple until talking about theory and why it might not work gets involved. Donkey is also too wholesome of a character to see him doing or saying anything that might be considered rough or out of bounds. And yet, for the movie Pinocchio, it was apparently just fine, unless people are protesting Pinocchio these days. It’s hard to tell with all the talk of what could and couldn’t be done these days. But the fact is that Donkey does still come off as a rough character, in a few ways, at least enough to say that he’s not exactly the kind of friend that everyone would want around. But as a talking animal, he’s one of the many that have been seen on screen over the years he’s adorable enough to be counted among the many that people simply accept without really thinking too much about it. But if one is being honest it’s not hard to see Donkey as the type that would fire up a cigar and enjoy a brew or two when the kids aren’t looking. Plus, there’s enough innuendo in the Shrek movies to please adults, who do get tired every now and then of the cutesy stuff that’s spoonfed to kids now and again.

Of course, since honesty is being used, some kids are at the point where they don’t care too much about the cute and cuddly versions of characters after a certain age and it might be easy enough for kids to understand that Donkey is a bit of a mooch and one of those annoying types of friends that people reluctantly introduce to others. He’s the type of character that is fun and engaging and has a big heart for those that he gets close to, but he’s also the type that has little to no manners, respect for personal boundaries, and is bound to be a little selfish at times since apparently, no one taught him any better. That’s another sign that he might be linked to Pinocchio since the kids that were turned into donkeys were the worst sort that didn’t really have any regard for anyone else.  But as I mentioned early on in the article, it’s a thin premise and one that’s more fun than anything to talk about since it could inspire a number of different ideas that might go in numerous directions if someone had the ambition to write a story about it. Even just a fun article about what happened to the characters in Pinocchio would be intriguing. As far as theories go this one is pretty tame, but it’s still funny to think about since unless there’s an animated short out there that explains it, Shrek didn’t do an in-depth backstory on Donkey.