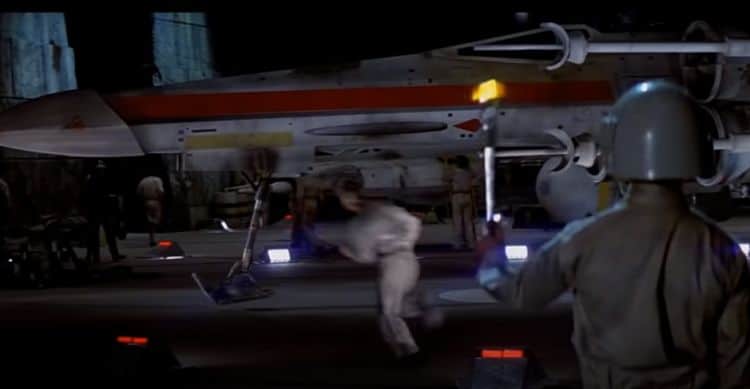 If you weren’t moved by that clip then you might not be a Star Wars fan or maybe you just don’t like the song, but now just imagine if this song had somehow been around when A New Hope came out, or would have been allowed as part of the soundtrack. The impact that the song gives is incredible since the truth about it is that in the Star Wars franchise there are only a few aircraft that are so easy to recognize as an X-wing, and there are even fewer that can pack the heavy punch they bring and match their agility in a dogfight. Throughout the entire franchise the X-wing has been the go-to starfighter for a lot of pilots, sometimes the craziest and most daring, as well as the most intuitive. It would make sense that Jedi would fly these if only because they are nimble, they respond well to split second decisions, and while they’re not the most durable craft the Alliance had they’ve definitely been among the most reliable throughout the long history of the franchise. Plus, Luke Skywalker flew an X-wing, which is what a lot of people might fall back on since that might be reason enough to remember them. But for those that have read the books, including the Legends canon, or rather especially the Legends canon, the X-wings came to represent a big part of the New Republic and the Alliance throughout the years.

A big part of this is a seriously underplayed character named Wedge Antilles who became a big deal in the books and graphic novels since he also became the leader of Rogue Squadron in the EU. An entire series of X-wing books was written in fact, detailing the adventures of the squadron as they flew on one mission after another and traveled from one planet to the next in accordance with orders and whatever they felt they had to do. X-wings became a big part of the Star Wars franchise, reaching iconic status very quickly as they were shown to be incredibly nimble, agile, and absolutely lethal in the movies and in the books. Of course only the best pilots were able to really control them, whether they had use of the Force or not. Han Solo was often seen in the Millennium Falcon in the company of X-wings since he participated in a couple of outings with Rogue Squadron, but the former smuggler wouldn’t ever be caught in the cockpit of one by choice. The thing about these starfighters is that while they handled well they took a lot of time to get used to in the books. In the movies it would appear that anyone who stepped into the cockpit was a trained ace ready to take on any opponent, but when Luke was seated in his craft it wasn’t really that he was a crack pilot, it was the fact that the Alliance needed another pilot up in the air that could take directions. Much like his father, a lot of his skill came from knowing when things were going to happen before they did, or the Force in other words.

Not to downplay or disrespect the soundtrack that went into the Star Wars movies, but something like Danger Zone does manage to kick up the feeling of aerial combat just a notch since it takes into account the actual danger that the X-wings were almost always flying into since they weren’t typically made for peace missions and were almost always a big part of any offensive strike the Alliance had to make. The fact that they’re one of the preferred vehicles throughout the franchise is enough to prove that they’ve more than earned their spot as one of the more well-known and highly approved parts of the story, though according to the movies they didn’t really make an impact until just before the battle of Yavin. They were a descendant of the Z-95 Headhunter, another popular starcraft in Star Wars lore  that bears looking into. But they were a much improved model that featured laser cannons on the S-foils and torpedo launchers that made the X-wing a highly versatile fighter. The addition of a hyperdrive made them even more useful since they could be used on long-range missions as well as in dogfights to great degree. In fact throughout the EU and even the current canon it’s been seen that X-wings are still preferred for long reconnaissance missions since they’re fairly hard to notice and can get from one place to another very quickly.

Yes I know, this is stuff that a Star Wars nerd would know about and enjoy, well, guilty as charged. Those of us that love Star Wars definitely get into this stuff since it’s more detail and more lore about something we actually care about. But it’s also interesting to learn how deep a fantasy can really go.