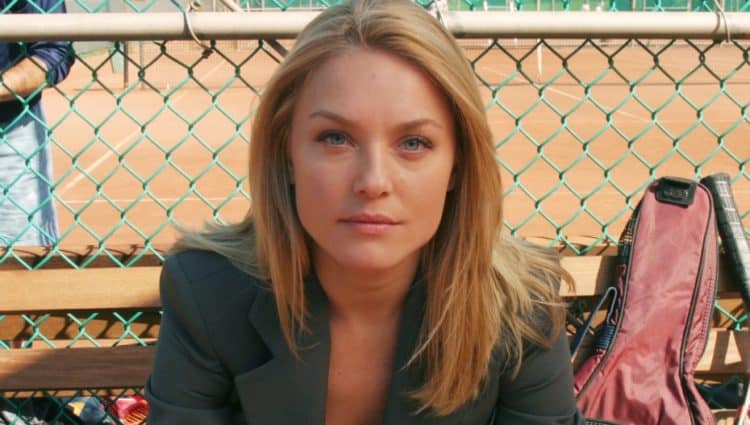 Elisabeth Rohm is the kind of woman you don’t want to treat as though she’s a dainty little flower, as she’ll likely stand up and tell you just where you can take your opinion. She’s not an overly aggressive person but she’s certainly not the type to just back down from anyone either. Having been born and raised into a good and caring family she’s still the type that can get down with the rough and tumble act when she needs to and doesn’t mind getting her hands dirty to get the job done. Anyone doubting that she has the guts to go the distance when it comes to her job and her life hasn’t met her or read a single thing about her yet. Rohm lives in a manner that might not be completely fearless, but is still unapologetic in how she composes herself and deals with others on a regular basis. In short, she’s the kind of person you want to be straight with when it comes to being around her.

10. She has an unpublished novel.

The book was about a young woman in Scotland who’s husband committed suicide. It sounds like a rather dark and depressing story but the chances seem good that there was much more to it than just that.

9. She has a dual citizenship in America and Germany.

She tends to stay in LA a lot but she does manage to go back and forth. No doubt both nations are proud to claim her as she’s been a rising star for a number of years now and someone that’s proven to be a mainstay in the business.

Unfortunately she had to quit after an injury that was never fully detailed forced her to abandon the saddle for health concerns. There’s a lot that can go wrong with horseback riding, but it’s kind of a shame since it is something that’s rather thrilling at times and can be a big loss to some folks. There’s simply something about being atop a powerful animal that can break into a full speed gallop at a single command.

She’s a first cousin once removed. Hogan is a part of her family but it would seem that even if they see each other all that often that they might not have as much in common as one might think. Or it could go the other way and she could have a good relationship with the man. It’s hard to know unless it’s fully disclosed and with Hogan a lot of things have been assumed that have either come under heavy doubt or have been seen to be false.

Elisabeth enjoys working out, keeping herself in shape, and doesn’t like to be seen as a dainty little woman. As she says there’s nothing dainty about squats or many of the other movements needed for various workouts.

Rohm plays the part of the White House Chief of Staff in this show and was there for about 13 episodes. While she didn’t get to last as long as the others she still made a decent contribution given her character and why she was there.

4. She was in the horror film Wish Upon.

She doesn’t get much of a part in this movie but it does bear mentioning that she gets to play a part that affects the main character in a very profound way. The movie itself is a kind of cautionary tale in wishing for life to get better and having to pay the price that comes as a result.

She’s not new to the screen but she definitely has a youthful appearance that might belie that sentiment. In truth Rohm is in her mid-40s, but she looks amazing for someone her age. Fitness and a healthy lifestyle can do wonders.

She’s been in American Hustle and Joy, but you might have to really look in both films to point her out since the trailers and many of the available clips tend to focus more on the stars that have been the most popular in the last decade or so. Rohm does what she can as a supporting actress however and in all honesty is great where she’s at.

1. She stars in The Oath

This show is all about loyalty and what it takes to keep the bonds of brotherhood when running in a gang. That means that it’s about the dangers that can come from outside the group as well as inside, since most gang-themed shows tend to feature the type of discord and chaos that can occur in even the most tightly-knit groups.

It’d be nice to see her in a lead role or something close to it.